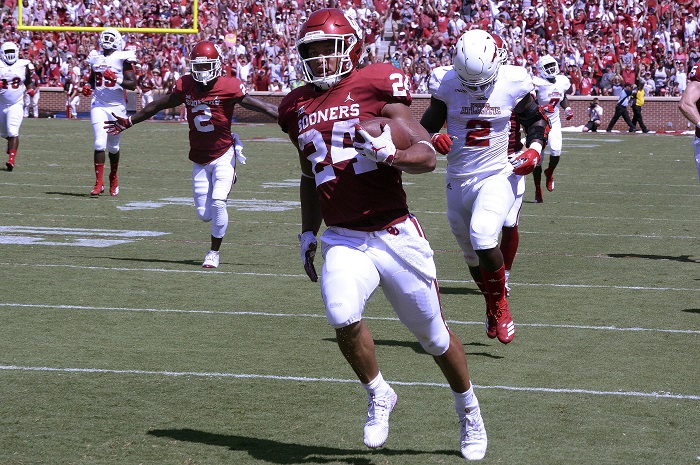 I hear it all the time, “Who has the best conference in college football?” SEC? Big 10? ACC? What about the Pac-12? Very rarely are you going to hear the words “Big 12” coming out of someone’s mouth in that conversation. Whether you do it or not, there are plenty of folks out there who love to bash the Big 12 conference (cough, Paul Finebaum, cough). It was opening weekend in the Big 12 and the conference ended up going 6-3 overall (ISU game was cancelled due to weather). That’s not ideal for the Big 12 as many us thought it would be a rebuilding year for the conference and early out of conference losses would really put a damper on any playoff hopes for some teams. But, as always there was plenty to take away from week one. There was some good, a little bit of bad and more than enough of the downright ugly.

I would be lying if I said Oklahoma State truly skipped a beat in this ball game. How does 436 rushing yards sound? Yeah, that’s what the Cowboys did to poor Missouri State on Thursday night averaging 7.9 yards per carry. Starting QB Taylor Cornelius went 24/34 for 295 yards and FIVE touchdowns in this game and really started getting more comfortable as the game went on. It was hard to take anything away from this game defensively, but the defense did their part as far as the starters go limiting Missouri State on offense. Overall, it was a solid performance for the Cowboys to start the season off with a win.

No Baker, no problem? The Sooners dominated all game long and FAU finally scored a touchdown but by then the Sooners were already up 56-0. Kyler Murray went 9/11 for 209 yards and 2 touchdowns and made some incredible moves escaping pressure in this game. Marquise Brown led the receivers with 133 yards and a touchdown while RB Rodney Anderson went for 100 yards and 2 scores on the ground. Most importantly, the defense looked good against FAU and didn’t really give up anything when the starters were in.

I know it’s just Southern but QB Shawn Robinson looked very sharp in this game as he went 17/24 for 182 yards and 3 touchdowns. Shawn also had 2 scores on the ground bringing his touchdown total to 5 in this game. A lot of guys got playing time since the game was well in hand, so the stat sheet is very spread out with everyone getting plenty of looks offensively. Defensively, the Frogs looked good as expected holding Southern to just 7 points and under 200 total yards.

West Virginia did what I expected them to do and that was dominate the Vols and crap on the SEC. Ok, I added in that last part, but you get the picture here. QB Will Grier looked like the Heisman contender we all expected him to be throwing for 429 yards and 5 touchdowns on Saturday putting all those Tennessee fans (Who talked a lot of crap) to shame. Not to mention, how about those Mountaineer wide outs? Both David Sills and Gary Jennings went for over 100 yards and combined for 3 scores. The offense looked great on Saturday. Defensively they held Tennessee to just 14 points as well as only giving up 129 yards on the ground which is an area they really struggled in last season. Top to bottom, it was a great performance for the Mountaineers.

This was a very interesting game, ok maybe not to you but for me claiming Charlie Brewer as the second-best quarterback in the Big 12 in the offseason sounds just plain stupid right now after this game. While Charlie Brewer got the initial start in this game, he rotated with Jalan McClendon who went 10/13 for 173 yards and 2 touchdowns in this ball game. In fact, Jalan looked like the best quarterback on Saturday and I think it would be fair to say that he outplayed Charlie Brewer. This will be something to keep an eye on moving forward and I will most likely be at the Baylor game next week when they take on UTSA at the Alamodome in San Antonio. Hard to take too much away from this game but the run game looked better as John Lovett and JaMycal Hasty combined for 22 carries, 217 yards and 5 touchdowns.

Yes, Baylor won the game giving the Bears their second win since the start of the 2017 season, but this defense made me feel a bit uneasy on Saturday. They gave over 220 rushing yards to Abilene Christian and 246 more yards through the air. Ok, maybe there was some garbage time stats here, but the Wildcats were able to score 27 points in this game and more concerning to me is that Abilene Christian attempted 40 passes and Baylor only managed one sack out of all those attempts. Moving forward, the Bears will need to clean up some things if they want to win more games this season.

If you are a K-State fan, you had to be sweating throughout this game and counting your lucky starts a bit that your Wildcats were able to pull out the victory. My goodness, this was a crazy game. Late in the second half, Kansas State was down 17-12 with the ball deep in their own territory when QB Alex Delton threw a crushing pick six to a Coyote defender and it put South Dakota up 24-12 at halftime. In fact, entering the fourth quarter South Dakota still led 24-12 before the Wildcats finally woke up thanks to an 85-yard punt return for a touchdown by Isaiah Zuber. Then with only 2:50 left to play in the game, Skylar Thompson was able to find Isaiah Zuber in the back of the endzone to put the Wildcats up 27-24 (With a 2-point conversion). South Dakota had one last chance to attempt a 50-yard game tying field goal to send it to OT but ended up missing giving Kansas State the 27-24 victory. Maybe we should just move on to next week and forget about this one am I right K-State fans?

As a guy who though this was this year Texas would do something, someone should just light a bag of crap on fire and leave it at my door. There WAS ZERO excuses for Texas to lose this game. Throw out the X’s and O’s, Texas has more talent than Maryland across the board and yet, they trailed nearly the whole game and ended up losing the game. QB Sam Ehlinger wasn’t very good in this game only completing a little over 50% of his passes and threw two costly interceptions both coming in the fourth quarter. There was a weather delay in this game, but Texas came out flat after that and failed to score a single point in the fourth quarter giving them another close loss. How about this for the Longhorns last 3 drives in a tight game. It went interception, fumble and interception. That’s not going to cut it and defensively Texas wasn’t all that great either giving up some big plays here and there. If this team doesn’t plan on being 6-6 again this season, some things better change.

For a coach that needs to make at least a bowl game to save his job this season, Kliff Kingsbury may be in some trouble already because Tech needs all the non-conference wins they can get before Big 12 play cranks up. Tech went with QB McLane Carter to start the game and unfortunately for the Red Raiders, McLane got injured early and true freshman Alan Bowman was thrown into the fire. Bowman was serviceable in this game, but it wasn’t enough offensively to get the job done. The offensive line didn’t give up any sacks and the run game looked improved as Tech rushed for 164 yards led by Da’Leon Ward. Overall this team gave up way too many big plays. The defense gave up 5 touchdowns of 34 yards or more and the kickoff unit gave up a 94-yard kick return for a touchdown. This “improved defense” gave up 546 yards of offense to Ole Miss on Saturday and if Texas Tech is supposed to lean on this defense to win games, they better step it up.

Don’t ask me why, I signed up for a free 30-day trial to ESPN Plus just to watch this game. Boy, I am regretting that decision a bit after watching this disaster for head coach David Beaty who is now 3-34 as the Kansas coach. The offensive line struggled in pass protection giving up 6 sacks and failed to open running lanes as the Jayhawks rushed for a whopping 56 yards on 32 carries against NICHOLLS. The defense wasn’t terrible giving up some key third downs and 329 yards, but the blame must be on the offense for Kansas. They looked all out of sorts and 255 yards of total offense against an opponent from the Southland conference is unacceptable. Should I send my suitcase to David Beaty now or should I wait until after the season? I am sorry Kansas fans, but David Beaty is probably gone barring a miracle finish.