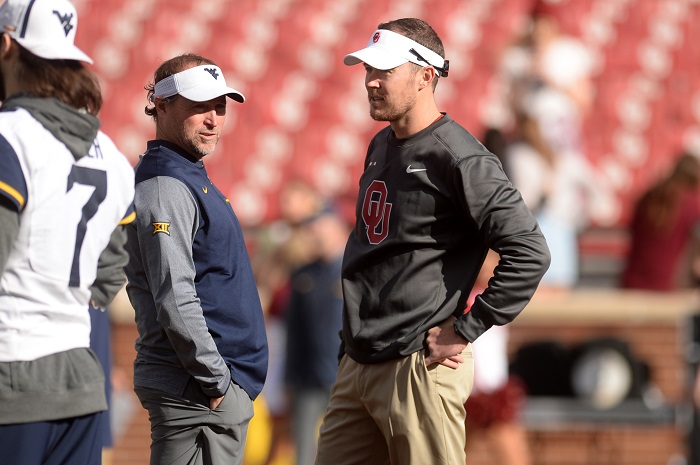 It was unanimous, as it should’ve been. The Sooners absolutely dominated a Florida Atlantic team that received votes in the preseason AP Poll and had one of the most explosive and efficient offenses in the nation last season. Mike Stoops appears to have the young pieces on defense he’s been looking for during his second stint in Norman and the offense hasn’t missed a beat with Kyler Murray replacing Baker Mayfield. The running game, behind this offensive line, could end up being as deep, proficient and effective as any in college football this fall. It’s the Sooners’ conference until proven otherwise.

The Mountaineers did what they were supposed to do: Beat up on a subpar SEC team. Will Grier, David Sills, Gary Jennings and T.J. Simmons did their thing on offense (after a bit of a slow start by their standards), but it was the defense that was actually just as, if not more impressive, than the offense. Defensive tackle Kenny Bigelow could end up being one of the most feared interior lineman in the Big 12 Conference this fall and the secondary was solid as well, holding Tennessee to less than 200 passing yards.

Unlike some of the other Big 12 folks, the Horned Frogs at least did not struggle against an FCS opponent, they smoked Southern 55-7.  Ya know, what Big 12 teams are supposed to do against FCS teams. Shawn Robinson’s season got off on as good of a note as any TCU fan could have hoped for with three passing touchdowns and two rushing touchdowns. TCU’s defense lost plenty of seniors from last season, but held Southern to just 185 total yards and forced three turnovers. The schedule toughens up this week with SMU and then takes a huge leap forward with Ohio State in Week 3. There’s more to learn about the Horned Frogs.

Taylor Cornelius waited years for this opportunity. And so far, so good. Cornelius lit up Missouri State for 295 yards and five touchdowns, exactly what he’s supposed to do, in a 58-17 win. Some wondered whether or not Oklahoma State’s offense could keep pace, despite losing Mason Rudolph and James Washington. There is a plethora of wide receiver talent in Jalen McClesky, Tyron Johnson, Tylan Wallace, Dillon Stoner and more. The early test, if you want to call Missouri State that, proved to be no problem at all.

Iowa State’s season opener was unfortunately cancelled due to severe weather in Ames. At the time, early in the first quarter, the Cyclones were leading South Dakota State 7-0. So now, the Cyclones defacto opener comes next week on the road against Iowa.

Well, the 2018 season certainly got off to a better start for Baylor than the 2017 season. Matt Rhule has his first win ever at McLane Stadium and the Bears have matched last season’s win total. Rhule appears to have two legitimate quarterbacks in Charlie Brewer and Jalan McClendon, the transfer from NC State. In fact, I would argue McClendon might have even looked better than Brewer at times. The Bears racked up nearly 300 rushing yards and have a ton of offensive skill position weapons in John Lovett, JaMycal Hasty, Trestan Ebner, Denzel Mims, Jalen Hurd and more, but the defense is concerning. It gave up nearly 500 yards of offense to … Abilene Christian. Not good. The Bears will have to outscore a lot of folks to win more games this season.

Yikes. What more is there to say? For a second straight season the Longhorns have opened with a loss to Maryland. In many ways, this loss is even worse than last year’s since it was Tom Herman’s season season as the head coach, his quarterback(s) are a year older and Maryland has been rocked by a scandal over the past several weeks and is using an interim head coach. There’s no way around the embarrassment that was for Herman and the Horns on Saturday, but just don’t tell that to the head coach. Texas gave up over 400 yards of total offense and had 10 penalties for over 100 yards. The schedule doesn’t break much coming up with Tulsa in town then it’s USC and TCU.

Talk about dodging a bullet. That’s exactly what Kansas State did on Saturday when the Wildcats trailed FCS South Dakota by 12 points for most of the game before pulling out a 27-24 victory at home. Everything about this was a very un-Bill Snyder like performance as K-State had 13 penalties for 129 yards and four turnovers, while forcing zero. Frankly, K-State is lucky to not have been the second Big 12 team to lose to an FCS program in Week 1. How sad is that to say? The most concerning part was that K-State’s offensive line, supposedly the strongest unit on the team, was getting pushed around at times by South Dakota. That’s a horrible sign of things to come this week against Mississippi State, which by the way, is where our first Heartland College Sports tailgate will be (East Lot, more details to come!).

Kliff Kingsbury knows this is a must-win season for him. That doesn’t mean 10 games, but it means improvement and consistency. Unfortunately, we saw none of that on Saturday against Ole Miss at NRG Stadium. Tech gave up seven plays of 30+ yards, and 90+ yard kickoff return for a touchdown, had two players get ejected for targeting and then turned to a true freshman QB after an injury to McLane Carter, who will be a game-time decision for this week’s Lamar game. Overall, I thought Alan Bowman held his own for a true freshman in a tough spot, but he was not going to overcome the defensive issues that this team continues to have. Considering we thought that side of the ball might help carry Tech this season, it makes Saturday’s outcome that much more disappointing.

I know this might shock you, but Kansas was the unanimous 10th placed team in our rankings. Stunning. I’m not sure what the defense is for head coach David Beaty at this point, who I said should be fired before the Central Michigan game this weekend. There is simply no point in continuing with this regime when you’re losing to FCS programs in YEAR 4 of a rebuild. It cannot happen. David Beaty is a good man, but it is time to move on. KU had a meager 255 total yards of offense, 1.8 yards per rush and more penalties than Nicholls. There’s nothing to like about Saturday’s performance.