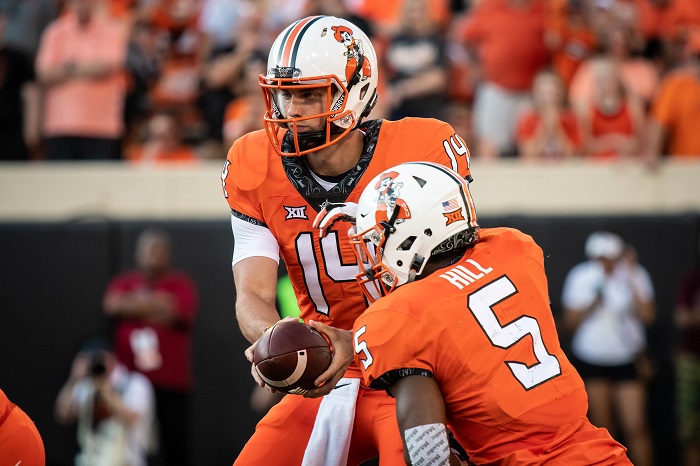 Here’s a closer look at the Cowboys’ upcoming game in our Oklahoma State vs. South Alabama preview and prediction.

Fun Fact: Oklahoma State senior quarterback Taylor Cornelius put up solid numbers in his first career start, throwing for 300 yards and five touchdowns on 25-for-35 passing (71.4 pct.). It was the fourth-most passing yards in a starting debut in Cowboy history.

Names in South Alabama wide receiver corps that were expected to take the reins were Jamarius Way, Sam Harris and Jordan McCray. But it’s Baker who in the opener tied a school record with three touchdowns, two rushing and one receiving. He was used in passing plays, in the option, sweeps and more. He’s a dangerous player who is developing fast that Oklahoma State should keep its eye on.

Thompson is now second on the school’s all-time interception list after a pick last week against Louisiana Tech. Against Oklahoma State, there will be opportunities for an interception or two, but will Thompson or anyone else be able to capitalize? Thompson sat out last season for an academic redshirt, but the former three-star recruit has a very high ceiling and hopefully becomes a leader as an upperclassman. He was flagged for taunting after his interception last week, so keeping a cool and level head is imperative for any potential upset of this magnitude.

The redshirt freshman was a fan favorite last year without even playing a single down. That’s what happens when your head coach says you’re the fastest player he’s seen since Tyreek Hill. And having a killer name like “Chuba” doesn’t hurt either. The Canadian track star did not disappoint in his first action. He totaled 149 all purpose yards, showing of his blazing speed on a 42 yard kick return and a 54 yard reception for a touchdown out of the back field. One thing the OSU offense has always lacked under coordinator Mike Yurcich is a back who is an truly dangerous receiver. If Hubbard can be a safety valve in the passing game when a play breaks down that can also take it to the house he’ll see a lot of time despite the wealth of talent at his position. I expect to see a lot of two back sets this week as the Cowboys play with their new toy.

“Barely controlled chaos” is the term I’ve used to describe Bundage’s play for two seasons. New defensive coordinator Jim Knowles wants that chaos to be closer to the ball. Bundage, a high school safety converted to linebacker, plays closer to the line of scrimmage in the new scheme, even putting his hand on the ground as a defensive end a few times in 3rd and long situations. With his speed he could become a nightmare for opposing QBs with his pass rush. With another outmatched opponent this week look for the Cowboys to continue letting him run straight at the ball while it’s still in the backfield.

Is Taylor Cornelius still the guy in Stillwater after halftime? While his debut was statistically impressive there are concerns. He threw the deep ball, an important part of Mike Yurcich’s offense, poorly. It was obvious on longer developing plays that he was thinking too much. His footwork would break down and his passes would either sail long or come up short. He also passed up some streaking receivers that last year’s star Mason Rudolph would hit in stride, instead opting for shorter, safer routes. If the threat to take the top off the defense isn’t there the other teams in the Big 12 can load up the line of scrimmage to stop the Cowboys’ stable of running backs. Mike Gundy still has confidence in Cornelius, saying he just needs to play through his jitters. But with a very good Boise State team coming to Stillwater next week if The Corndog is still struggling he may have a short leash.

South Alabama should be a better team than Missouri State but not by much. This game should be another tune up, a way to try to iron out the wrinkles before a top 20 Boise State teams comes to town next week. In Alabama last year Justice Hill was held in check and the Cowboy passing attack carried the load. Expect the same strategy this year after Taylor Cornelius’ shaky start last week. With the Jaguars crowding the line of scrimmage the plays should be there for him to get in rhythm and show that he’s the player Gundy says he is. If not we may get to see Hawaii transfer Dru Brown. Jim Knowles will keep the defense fairly vanilla for his style again and just let the talent edge win out. Cowboy fans: expect to be channel surfing to other games by the middle of the fourth quarter.