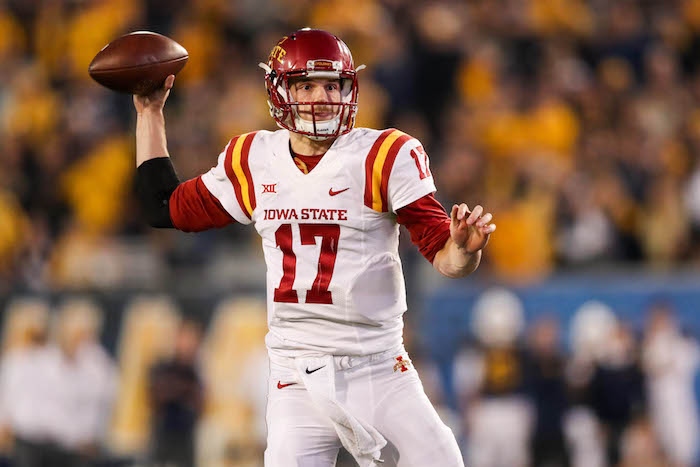 All in all, it was a tough weekend for the Iowa State Cyclones. But head coach Matt Campbell delivered some good news on Monday when he said that quarterback Kyle Kempt is not doing with any kind of long-term injury.

Kempt left Iowa State’s 13-3 loss to Iowa early in the fourth quarter and after the game, Campbell said that his starting quarterback may have suffered some MCL damage. Any injury, especially the knee, is scary, just ask OU running back Rodney Anderson, but thankfully for Kempt, it doesn’t appear to be anything serious.

“It looks more day-to-day than it does long term,” Campbell said on the Big 12 teleconference. “We’re all breathing a deep sigh of relief here.”

But the head coach went on to say that there’s no guarantee he plays in a huge game against Oklahoma this weekend, adding, “His availability this week is still up in question, but it’s a little better than what we thought the outcome was going to be on Saturday. The reality of it is that we certainly dodged a big bullet.”

Saturday’s game is the first time the two teams have met since the Cyclones shocked the Sooners last year in Norman, which was also Kyle Kempt’s first start. If Kempt can’t go, the Cyclones will turn to Zeb Noland, who finished 4 of 10 for 43 yards in relief for Kempt on Saturday. Noland played some last season completing 55% of his passes for 533 yards with two touchdowns to one interception.

Oklahoma head coach Lincoln Riley believes that whoever is at quarterback for Iowa State will prove to be a challenge, saying on the Big 12 teleconference, “We know Iowa State does a great job schematically, regardless of who’s in there. We have to be able to adjust. We’ve done it the first two weeks, and certainly it looks like we’re going to have to do it again.”

Oklahoma at Iowa State kicks off at 11 a.m. on Saturday.