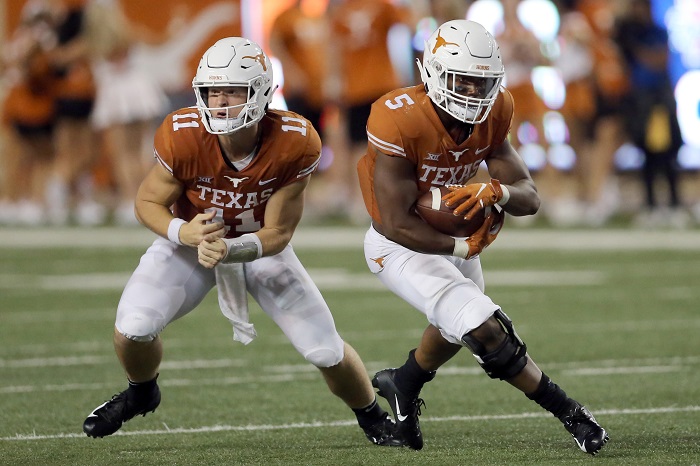 DKR-Texas Memorial Stadium- The final score on the scoreboard displayed Texas:28 Tulsa: 21. While the game will go down in the win column, I can’t remember the last time I heard this much arguing over a Texas victory. Whether you read it in the papers, online or even on social media, writers and fans are taking a stance on this game. It’s either Texas won, or Texas won but it wasn’t good enough debate. Right or wrong, this is my breakdown of how I saw the game.

In the first half offensively, Texas scored three touchdowns in six drives (not counting the last drive at their own 20 with a minute left in the first half.) In the big picture, Texas could have put points on the board on four of their six drives but the Longhorns opted to go for it on fourth down on the Tulsa 2-yard line and didn’t convert. Besides a blocked punt by the special teams, when Texas had the ball in the first half they not only took care of the football but as I mentioned earlier, they got points in the first half and led Tulsa 21-0 at the break.

Defensively, Texas pitched a shutout in the first half and while Tulsa did miss three field goals, Tulsa had four drives that lasted three plays or less. Thanks to freshmen B.J. Foster and Caden Sterns, Texas had two picks to add to their defensive performance in that first half. Say the Tulsa kicker connects on those field goals. So, what? Texas would have still led 21-9 and that wouldn’t have been the end of the world. Or at least I think it wouldn’t have been.

Not sure what happened in the second half because the Texas offense that showed up in the first half must have stayed in the locker room and sent another offensive unit out to finish the second half. I will throw out the last drive because just like in the last offensive drive of the first half, they were simply trying to run the clock out. So, that leaves 5 total offensive drives and Texas was only able to find the end zone once. In fact, that’s all they found offensively in the second half because in their first 4 drives of the second half, no drive lasted longer than 5 plays. In their first 4 drives Texas ran a total of 14 plays. On their fifth drive (the touchdown drive), Texas was able to march 75 yards downfield on 13 plays. To cap the game off, Texas ran 13 plays to eat up nearly 5 minutes of clock.

This one is a little more puzzling to figure out. In the first half Texas had a bend but don’t break defense. It also helped that Tulsa missed three field goals in the first half, but the second half wasn’t exactly a great performance for the Longhorn defense. Tulsa had a total of five drives and was able to find the end zone three times. That’s not going to cut it against any opponent let alone a team like Tulsa. In fact, in those last three touchdown drives, no drive was longer than six plays. Due to the fact Tulsa plays an up-tempo spread offense it’s not surprising. The surprising part is that they were able to score that easily on the Texas defense. In the first half, the defense played good enough to win the game and in the second half they played bad enough to possibly lose the game.

I went back and watched the full game to get a closer look at this one. Not only to see some mistakes and gather my thoughts but to let everything sink in for Texas fans. While some people have calmed down others have ramped up their anger. I could talk about what Tom Herman had to say after the game but quite frankly, I don’t care. You know why? Because this is a game where Texas pays Tulsa, demolishes them on the field and moves on. Instead, there were more questions than answers that came from this game. Should Texas have played better? Absolutely. Does Texas have an issue of playing to the level of their competition? Sure. But did Texas win the football game? Yes. At the end of the day what is more important, playing up to your standards or winning football games? If the answer isn’t winning football games, then you are going to be one miserable college football fan.

Does anyone know the last time Texas won 10 or more games in a single season? Try 2009. Here is an interesting stat. From 2010 to 2017, do you know how many current Big 12 teams have won 10 or more games in a single season? The answer is 6 (OU, OSU, KSU, TCU, WVU and BAY). Every team on that list has accomplished that at least twice but you know what team is missing? Texas. Winning hasn’t come easy for this program lately and to those suggesting that Texas should get rid of Tom Herman, TAKE A DEEP BREATH. There is a lot of football left to be played and don’t forget, this is only Year Two of the Tom Herman era. Sure, there is plenty of room for improvement but no matter how you flip the coin, both sides will have a capital W for win on it. Depending on which Texas fan you ask, Texas did win a football game on Saturday.