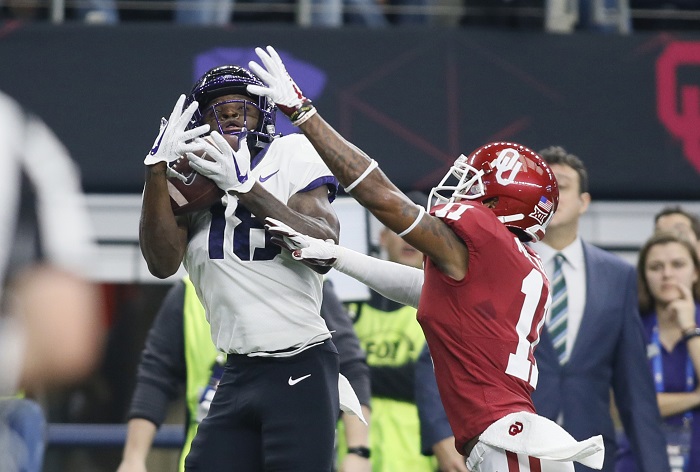 There are probably some that don’t give a rats you know what about how my weekend was. If you do care or even if you don’t, I am going to tell you anyways. Friday, I covered a local high school game and Saturday I watched college football all day long. It was a day full of Big 12 football for me and I capped it off by going to the Baylor/UTSA game at the Alamodome here in San Antonio. Conference USA games suck and that’s all I have to say about that. Sunday, I watched my Houston Texans lose to Tom Brady and after that, I am ready for a new week of football. On to the mailbag!

@FitzDaddy85 asks: After seeing the CMU game what are your thoughts on Kansas? Can they finish better than 10th in the Big 12?

Duke: For starters, I was happy to see Kansas end that ugly road losing streak. I’m sure you know but that was the first Kansas win on the road since September 12th of 2009! It’s been awhile to say the least. I really like what I saw in that game, especially on offense. I know the defense has some pieces but offensively, they looked a lot better than they did in the opener against Nicholls. Freshman RB Pooka Williams was outstanding and QB Peyton Bender didn’t turn the ball over which is nice to see. The offensive line play improved and they now have a little momentum when they host Rutgers this Saturday. Hopefully they can pull out another victory because David Beaty needs all the wins he can get this season being on the hot seat. As for the second part of this question, I haven’t seen enough things to make me believe that Kansas will not finish dead last in the Big 12 once again. This team is still very much a work in progress and don’t forget, the competition only gets tougher from here on out.

@jonkev50 asks: Can a one loss Big12 team get into the college playoffs this year?

Duke: It all depends on what the other conferences look like. Let’s get these facts out of the way. One team will come out of the SEC (Alabama or Georgia) and Clemson will come out of the ACC. That’s 2 of the 4 playoff spots already. Also, don’t forget about the Big Ten. At this point it’s either Ohio State or Wisconsin coming out of there so that’s 3 spots. It’s going to come down to 5 teams in my opinion for that last playoff spot. Right now, I will say Oklahoma, West Virginia, Stanford, Washington or Notre Dame. If Washington losses another game they are done but all the other teams I mentioned haven’t lost a game yet. It’s still very early but right now but West Virginia and Oklahoma look like the top 2 teams in the Big 12 but only one of them will be crowned champion. As of now, I say if there is a one loss Big 12 team they get in only if they win the Big 12 title.

@HotRoutePodcast: One Big 12 player having a great start that NO ONE is talking about right now.

Duke: It’s still SUPER early right now but 3 players have come to my mind. The first guy for me is Kansas LB Joe Dineen. Sure, he got some preseason love but I still feel like because he plays for Kansas, he doesn’t get the respect he truly deserves sometimes. So far Joe has had 20 tackles in 2 games and even got an interception this past weekend. He is the real deal and will be in the top 10 in the country in tackles this season. The other two are wide outs Tylan Wallace (OSU) and Denzel Mims (Baylor). Tylan had 4 catches to start the year and had 10 more against South Alabama and has really started to blossom in this offense. I expect him to have a bigger role as the seasons goes on. As for Denzel Mims, I am not really surprised but this guy is one hell of a football player nobody is talking about right now. He is a top 3 receiver in this conference.

Duke: It was actually Pete that went to Manhattan, Kansas for that ugly game that K-State played in vs Mississippi State. I went to the Baylor/UTSA game last week but Pete probably had more fun than I did. As far as I know, Pete really enjoyed himself up there and he got to talk with plenty of folks who read the site which is awesome. As far as what surprised me? The bad was definitely Texas only beating Tulsa by 7 points at home. Sure, it’s a win but it’s an embarrassing win but at this point Texas should be happy they finally got in the win column. How can the good not be Kansas beating Central Michigan? The Jayhawks ended a 46 game losing streak on the road and that was probably the best moment for me this weekend. Again, congrats Kansas fans.

@TedFlintKansas: How many more weeks until I’m happy? I want to be happy Derek…

Duke: Since you are an Iowa State fan, the next time you will be happy is Saturday September 22nd. Notice that is next Saturday not this upcoming one. You guys play Oklahoma this week at home and after that abysmal performance on offense I saw last week against Iowa, there is no way I think the Cyclones are keeping up with the Sooners. Oklahoma is making positive strides on defense and that offense has been fire with Kyler Murray at the helm. Wide outs CeeDee Lamb and Marquise Brown are a deadly combo but they did lose RB Rodney Anderson which hurts but I think they won’t skip too much of a beat on offense because they have a very talented and deep backfield. Plus, that O-Line is very physical up front which is why I still feel good about them even though they lost a guy like Rodney. Don’t think they forgot that loss to Iowa State at home last year either. Defense is what could keep ISU in the game but they don’t have enough offensive firepower for me to believe that the Cyclones can win this one.

@bd91373 asks: If Texas Tech gets by Houston and goes on the road and beats Oklahoma State. Do you think they can surprise people by maybe getting an upset win over West Virginia or TCU and do more than 6 wins?

Duke: So if they were able to beat Houston and Oklahoma State (Which is a lot to ask for right now), that would put Tech at 3 wins. Looking at the rest of the schedule I believe they are capable of beating Baylor and Kansas so that would automatically give them 5 wins with that. As for win number 6? I think their best chances to beat anyone else that is left is Kansas State or Iowa State at the moment. But if Tech is able to get by Houston and OSU, I would feel comfortable to put them at 6 wins and best case 7. Would I feel confident and believe that this will all actually happen? No, I wouldn’t.

@Chrissboom_ asks: Serious chance WVU doesn’t play NC State this weekend with hurricane Florence coming. Would the committee hold this against them and how much?

Duke: Unfortunately I don’t think this game will happen and if you live in that area, please stay safe and be cautious. So, WVU has a bye week for the week leading up to Saturday October 20th. They could possibly try to schedule another team from the ACC with that bye week but only if that team’s game has been cancelled and at this very moment, there hasn’t been info about any cancellations just yet. I will say with or without this game, if the Mountaineers take care of business the rest of the season it won’t matter because they will be in the CFB Playoff.

Tom Herman, Texas and the Tale of Two Halves Against Tulsa
Ohio State vs. TCU: Preview and Prediction
To Top