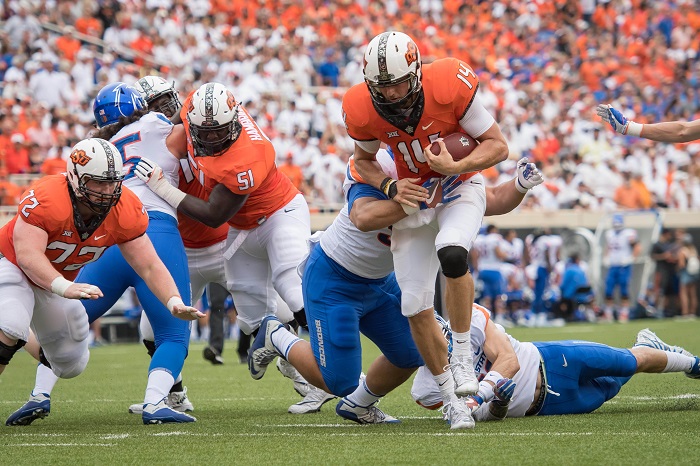 The Oklahoma Sooners are clearly the class of the Big 12 Conference. They’ve won three straight conference titles and are the heavy favorites to win another one this fall.

But after OU, the conference is up for grabs. I believe that the next tier consists of West Virginia and TCU, while No. 4 through 9 is a complete mishmash. However, throughout it all, the Oklahoma State Cowboys remain steadily, a quietly, a team to be reckon with in the Big 12 Conference. They proved that again with a convincing 44-21 win over Boise State at Boone Pickens Stadium on Saturday afternoon.

Taylor Cornelius, a.k.a. “Corndog”, is showing the country why Mike Gundy had so much faith in naming the 5th-year senior his starting quarterback heading into the season. He finished 15 of 26 for 243 yards and a touchdown. Not Mason Rudolph-type numbers, but importantly, he took care of the ball with zero turnovers. We also saw Cornelius use his wheels, finishing with 16 carries for 41 rushing yards, including two touchdowns. At 6’6”, 230, this is an added element to his game, and frankly a part of the game that Rudolph did not possess. At times Corndog looked like Ben Roethlisberger, in that it wasn’t very pretty or smooth, and at times it looked like he was moving in slow motion, but thanks to his size and smarts, it was effective.

But possibly even more impressive was what took place on the defensive side of the ball. Jim Knowles’ gang held the Broncos to 1.1 yards per carry. Yep, a total of 31 rushes for 34 yards. By comparison, the Cowboys allowed teams to rush for 140 yards per game last season, which was middle of the pack in the Big 12. Quarterback Brett Rypien fumbled the ball four times, but only lost it once. The Cowboys were consistently in the Boise State backfield, racking up 10 tackles for loss, with Jordan Brailford leading the way with 3.5 on the afternoon.

After the win Knowles said about Brailford, “There were some plays he was in the backfield so fast he missed the tackle.”

The move came thanks to the fact that Brailford was moved from defensive end to play a linebacker-type role at times, which he loved, adding, “Last time I played linebacker was my senior year of high school. Four years later, I’m getting a chance to do what I love again, have fun with it and make some plays.”

Calvin Bundage was all over the place and led the team with 12 tackles, including 1.5 tackles for loss and .5 sacks. Jim Knowles has thought outside the box with this group and is more than justifying Mike Gundy’s position to move on from Glenn Spencer and bring in Knowles, adding, “We do some things differently now that allows us to get more pressure on the quarterback.”

Then, there was the special teams, which had two blocked punts, with one being returned for a touchdown. Mike Gundy in his typically understated fashion, said, “Special teams obviously was the difference.” Always solid insight from The Mullet.

But when you look at all three phases of the game for Oklahoma State against a quality non-conference opponent that they were underdogs against by kick off, there’s plenty of reason to believe that the Pokes are going to have something to say in the Big 12 race.

I’m not saying they’re going to roll to the Big 12 Championship Game and beat the Sooners, but the Big 12 is currently Oklahoma and then… who? We could spend the entire day arguing which Big 12 team is going to find itself playing in AT&T Stadium on the first Saturday in December. Right now you could make me an argument for, in addition to Oklahoma, TCU, West Virginia, Oklahoma State, and probably even Texas, after how they, and more specifically their offensive line, looked Saturday night against USC.

But the bigger picture: Don’t overlook Mike Gundy and the Pokes this season. There isn’t a Heisman contender, but they might just be a more complete team than they’ve ever been under Gundy. And that’s a scary proposition.