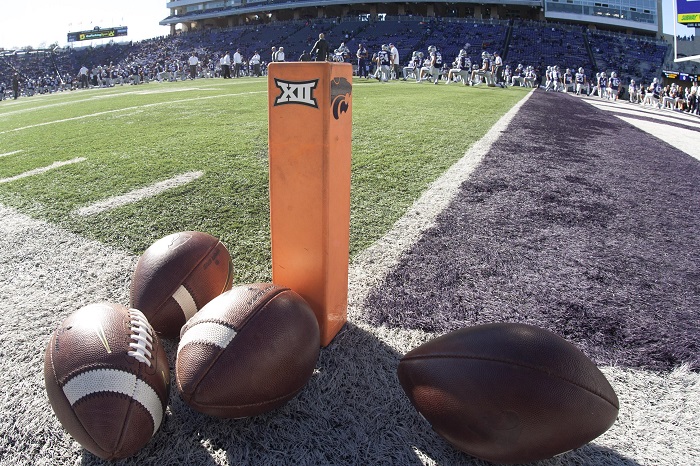 As we gear up for Week Four of the college football season, several Big 12 teams are getting ready to play their conference openers. Also, we’re getting a better idea of who the contenders and the pretenders are in the conference. So here are the top five storylines I’m watching in the Big 12 Conference heading into Week Four.

1. Is Kansas State having just another slow start?

Bill Snyder teams traditionally improve as the season goes along. Is that going to be the case again this season? The Wildcats looked pretty bad in Week 1 and 2 against South Dakota and Mississippi State, respectively. But then they knocked around UTSA last week and head into Morgantown on Saturday. WVU has been resting for two weeks and has one of the best offenses in the country. The Wildcats are getting no respect as a 17-point dog in this game. If K-State wants to be taken seriously, keeping it close, as Snyder has traditionally done against WVU, will go a long way towards Big 12 respectability in the coming weeks.

Iowa State barely has 100 rushing yards on the season through two games. Is that a product of facing solid run defenses in Iowa and Oklahoma or is it a sign of a bigger problem? Iowa State faces Akron on Saturday and needs to put a whooping on a Zips team that did beat Northwestern last week, but still is not expected to even be a contender in the MAC. It’s time to see David Montgomery get things going on the ground and for the offensive line to open up more holes. If not against Akron, then who? Matt Campbell does not want to lose all the momentum this program carried over from last season’s 8-win campaign and it has to start in Week 4.

The Cowboys’ defensive performance last week against Boise State was the most impressive performance of any unit in the Big 12 last week. The pressure and confusion they caused the Broncos under new defensive coordinator Jim Knowles was awesome to watch. Now, they get to welcome in another high-flying offense with Kliff Kingsbury and Texas Tech coming to town. They’ll be facing a true freshman QB in Alan Bowman and while Kingsbury will scheme well, the Pokes should have a lot of success against Bowman, who was playing high school football in Grapevine, TX this time last year.

TCU has owned Texas, winning the last four meetings with the closest victory by 17 points. The Horned Frogs are still getting no respect (oh, and yes, check out this headline from CBS that Gary Patterson probably has plastered on the locker room walls) in this game as just a 3-point favorite, despite their string of success compared to the Longhorns. But after beating USC, is Tom Herman ready for a much-needed big time Big 12 win to really start to get some grumpy UT fans off his back? It won’t come easy as Gary Patterson always has his players jacked up for this game against the “flagship” college football program in the state of Texas.

5. Battle of the Basement

I can’t believe how much intrigue Baylor vs. Kansas suddenly has. Baylor fans are down in the dumps after how the Duke game started last week, while Kansas fans are getting a little too confident, if you ask me. Baylor won this game 38-9 last year and both teams have similar personnel returning. But that didn’t stop Vegas from making Baylor only a 9-point favorite, which by the way, fans bet down to just 7 points. Maybe I’m the one missing something here, but I’m not overreacting the the results each team had last week. Time to see more on Saturday.

Big 12 Conference Sets Record for Revenues with $365 Million
A Big 12 Fan Takes on Austin, DKR and the Game of the Year in the Conference
To Top