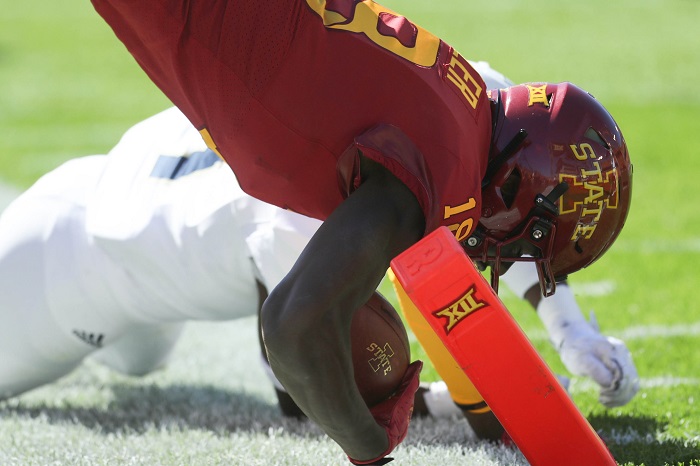 For the most part, Saturday was a snooze fest for Cyclones fans. Sure, the 26-13 win over Akron was the first win of the 2018 season, but it sure wasn’t all that inspiring.

Iowa State had a great moment before the game, honoring the slain Cyclones women’s golfer Celia Barquin Arozamena. But on the field, the great moments were few and far between. David Montgomery did rush for 107 yards, which was practically as many rushing yards as the Cyclones had in their first two games combined against Iowa and Oklahoma. Zeb Noland wasn’t as sharp as last week against OU, but he finished with 233 passing yards.

“I know it wasn’t perfect,” head coach Matt Campbell said following the win. Campbell admits that the team had to many errors, adding, “We won because we stayed the course and ran the football and stopped the run. Those things really allowed us to mitigate some of those mistakes.”

Iowa State had poorly-timed penalties, unusual turnovers and settled for field goals instead of touchdowns. The Cyclones found themselves down 7-0 in the first quarter after losing a fumble deep in their own territory. Then, it was a tie game late in the first half until David Montgomery’s 1-yard TD run.

Noland, the back up to Kyle Kempt, who’s still out due to injury, said, “I think we’ve just got to keep sustaining drives, keep the defense off the field. It’s great we’re kicking field goals and getting three points. But we’ve got to score touchdowns.”

The Iowa State defense remains one of the best in the Big 12, never allowing Akron to reach the red zone. But for all the good that side of the ball provided, holding the Zips to 244 total yards, the rest of the issues throughout the day overshadowed that “good”.

The Cyclones lost the turnover battle (2-1), had more penalty yards than Akron (50-45) and were just 6 of 16 on third downs. When you look back to the 2017 season, when the Cyclones finished 8-5 and won two games over Top 5 opponents, they were as efficient as any team in the Big 12. They finished second in the conference in turnover margin, but were first in Big 12 play. Through 3 games, the Cyclones are -2 in that department. Also in 2017, Iowa State led the Big 12 in fewest number of penalties and penalty yards per game.

Yes, there has been an injury to starting QB Kyle Kempt, and David Montgomery missed the second half of Saturday’s with a minor injury, but not one that Campbell is concerned about (“I think he’s fine. Just got dinged up a little bit. Just trying to be smart with it.”). That being said, this team doesn’t have the same feel that it had last season. The record was similar at this point in the season, as Iowa State was 2-2 through 4 games in 2017, and had they not had their game against South Dakota State cancelled, they would likely be 2-2 right now.

But in 2017, they beat up on Akron 41-14 and their two losses to Iowa and Texas were close and competitive games. It was a 44-41 defeat to Iowa in overtime, a game that ISU should’ve won in regulation, along with a 17-7 loss to Texas. It never really felt like Iowa State had a chance through this year’s Iowa or Oklahoma games.

The Cyclones schedule does not let up one bit, with three ranked teams coming up, including two on the road. Iowa State plays at No. 17 TCU next weekend, then at No. 15 Oklahoma State, followed by a home game against No. 12 West Virginia.

There is no time for the Cyclones to continue to work out the kinks. If this team is going to compete near the top of the Big 12 Conference, which many of us though was possible before the season, it needs to improve, and improve now. That Cyclone Magic from 2017 needs to return ASAP.

West Virginia vs. Kansas State: Preview and Prediction
It’s Fair to Push the Panic Button in Manhattan, Kansas
To Top