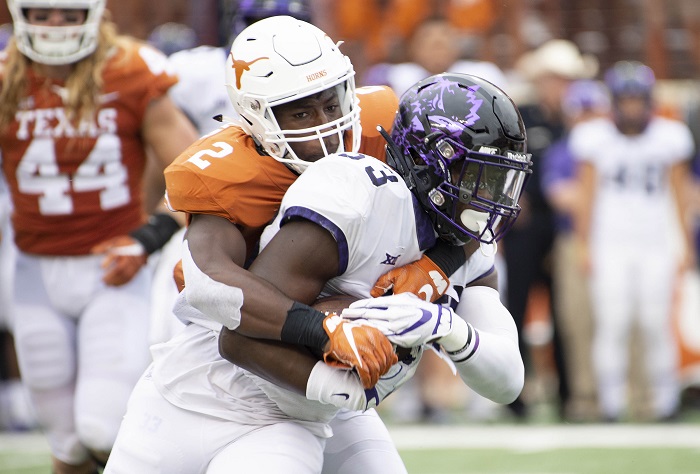 I hear it all the time, “Who has the best conference in college football?” SEC? Big 10? ACC? What about the Pac-12? Very rarely are you going to hear the words “Big 12” coming out of someone’s mouth in that conversation. Whether you do it or not, there are plenty of folks out there who love to bash the Big 12 conference (cough, Paul Finebaum, cough). It was a CRAZY weekend in the Big 12. We had plenty of surprises, both good and bad as well as some drama. As always, there was some good, bad and downright ugly.

It was a tough game for Iowa State on and off the field. As most of you may know, earlier this week Iowa State golfer Celia Barquin Arozamena was found dead earlier this past week. To honor her, Iowa State fans wore yellow while the players wore yellow wristbands. It was a very emotional day for Iowa State fans and players to say the least. Now, as for the on the field play, Iowa State certainly had their fair share of struggles. Defensively, I thought they played well and only gave up 13 points and held the Zips to just 91 yards rushing on 31 attempts. What concerned me was the offense for the Cyclones. Yes, WR Hakeem Butler and RB David Montgomery had good games, but the offense had two costly fumbles in the ball game. Iowa State held just a 7-point lead at halftime and after the third quarter, that lead shrunk to three. Luckily, Iowa State was able to knock in 3 field goals to get separation but really give credit to the defense for only allowing three points in the second half. The Cyclones can get away with kicking field goals against a team like Akron, but it may not work so well once they get into full swing in Big 12 play.

Another week, another Will Grier Heisman performance. Grier went 25/35 for 356 yards and 5 touchdowns. Yes, he did throw 2 picks but when the Mountaineers struggled to run the ball at times, they relied on Grier’s arm and he delivered. Grier found WR David Sills for 3 scores and WR Marcus Simms had a field day with 5 catches for 136 yards. Most importantly, how about that Mountaineer defense? The unit held K-State to just 6 points and 91 rushing yards. We all know how much Kansas State loves to run the football so holding them under 100 yards on the ground is a recipe for success. I get it, the Wildcats are a mess right now, but this is a HUGE confidence boost for this defense. The Mountaineers look like a team destined for Jerry World right now.

After this conference win, the Bears move up to 3-1 overall before heading to Norman next week to take on Oklahoma. QB Charlie Brewer separated himself in this “QB competition” by going 19/27 for 221 yards and 3 touchdowns. He also was second on the team in rushing in this contest running for 57 yards on the ground. Overall, I really liked what I saw from the Bears run game as they rushed for 190 yards as a team. That was an area of concern for me. When they can run the football successfully, it takes pressure off Charlie Brewer and the offense runs much smoother when you are balanced. Hats off to the offense for Baylor. Another area of concern? Stopping the run! Baylor did just that as they held Kansas to 122 rushing yards but most of that came from a long run of 72 yards by Kansas RB Pooka Williams. Other than that, Baylor shut them down. Also, only giving up 7 points just sums up how well this defense played. I know it’s just Kansas, but I really like what I saw from Baylor Saturday. I know quite a few people who thought Kansas would win this game.

Another week, another ranked opponent goes down against Texas. Last week it was USC and this past weekend it was TCU. Texas didn’t light up the stat sheet, but they really wore this TCU defense down with 45 rushing attempts even though they only rushed for 112 yards. Texas QB Sam Ehlinger went 22-32 for 255 yards and 2 scores and added a key touchdown run late in the third quarter. I can’t talk about this offense and not mention WR Collin Johnson who caught 7 passes for 124 yards and had a beautiful diving touchdown catch. This offense did what it needed to do to control the game and most importantly, took care of the football. The defense held TCU to just 3 points in the second half and got 4 turnovers on the day. Texas has a dynamic trio on defense with Brandon Jones, Gary Johnson and Caden Sterns. Those 3 guys were HUGE in this game. Is Texas back? Maybe? Only time will tell. But first, they will have to travel to Manhattan, Kansas to take on the Wildcats, a place where they haven’t been successful to say they least.

I believe I read that Oklahoma State was favored by 13 in this game. So, if you had Texas Tech winning by 24 please let me know. I want you to let me know so I can call bullshit on you. HOLY COW WHAT A SHOCKER! I still am in shock as I am typing this out right now. Texas Tech rushed for 224 yards against the Cowboys with RB Demarcus Felton leading the way rushing for 121 yards and 2 scores on just 12 carries! No wide receiver had a monster game, but between the efforts of Antoine Wesley, Ja’Deion High, Zach Austin, Seth Collins and TJ Vasher, they all contributed nicely. What’s crazy is that this was true freshman QB Alan Bowman’s first road start and while he threw for 397 yards, it wasn’t even his best performance. Sure, he threw 2 picks, but I thought he handled himself well for his first road start. For coach Kliff Kingsbury THIS IS HUGE! It helps cool off that hot seat and suddenly, the match up against West Virginia at home becomes a lot more interesting. In fact, I may be making the drive up to Lubbock next week. Also, this was Texas Tech’s first win against Oklahoma State since 2008 and their first win in Stillwater since 2001 when Kliff Kingsbury was still playing quarterback for Tech.

Even though the scoreboard says 31 for Texas, it wasn’t all on the defense. The Horned Frog offense really didn’t help them out much with the turnovers. Overall, I thought the TCU defense didn’t play that badly, but they did break a few times later in the game. I must put this more on the offense. TCU had some success on the ground averaging well over 4 yards per carry but once again, turnovers bit them in the ass. It was another third quarter collapse for TCU. QB Shawn Robinson threw 2 picks and even fumbled the football which gave Texas plenty of momentum. TCU had their chances to get separation in this game but failed to do so due to the mistakes offensively. Outside of the first game against Southern, I have yet to see this TCU team play a complete game. The Horned Frogs will host a hungry Iowa State team next week in Fort Worth.

Oklahoma was a 30-point favorite in this game went into OT. WHAT? Look, I understand the triple option is not something you see everyday in the Big 12 but c’mon Mike Stoops. You are just throwing gasoline on the fire here because every OU fan wanted you gone before the season and this won’t help you with them after this performance. However, it’s not about the fans, it’s about this football team. I won’t bash the Oklahoma offense too much because they only had 8 possessions in this game and scored 4 touchdowns. But, those last 2 drives in the fourth quarter were brutal. First, they had fourth and goal at the Army 1 and couldn’t convert and before the end of regulation they made it down the Army 16 only to miss a game winning FG. Luckily, they got their act together in OT or else it would have been a disastrous day. Give Army credit because they held the ball for over 44 minutes in the game and Oklahoma couldn’t keep them off the field as the defense wore down because the Black Knights rushed for over 300 yards. It wasn’t pretty, but they got the win. PS: I caught the last few minutes of the game and overtime thanks to a periscope of someone recording the game on their phone. I was desperate since this was a pay per view game.

I don’t know what else to say about this Kansas State team anymore. They have been on my ugly list 3 times in the last 4 weeks. I can’t see how anyone can take any positives out of this game for Kansas State. Offensively, this was a train wreck. Skylar Thompson wasn’t effective, nor was Alex Delton. Yet, for some reason Bill Snyder thought Alex Delton played much better. Both quarterbacks had a QBR rating below 45 and neither guy was consistent. The run game wasn’t there, and, in this offense, that means trouble because this offense is not built to throw the football. Plus, the wide outs besides Isaiah Zuber aren’t very good when it comes to catching the football or getting separation. This offense is a complete mess and the defense isn’t much better. If the Wildcats don’t show something against Texas next week, Kansas State is in some serious trouble. This looks like a team that won’t make a bowl game right now. Are the wheels finally falling off for this program under Bill Snyder? It certainly looks like it now.

Another shocker here. Wow! Oklahoma State looked like a completely different team Saturday than the one we saw against Boise State. It certainly wasn’t the best day for Taylor Cornelius and this Cowboys offense. Justice Hill had only 12 carries, but he averaged 9.3 yards per carry! Take his longest run of 37 yards and that is still over 6 yards per carry. FEED HIM! Mike Gundy mentioned after the game they couldn’t block up front in the run game, but Justice was able to create and make stuff happen on his own. I don’t care, GET HIM MORE THAN 14 TOUCHES! Justice Hill and WR Tylan Wallace were truly the only bright spots for this offense that went scoreless in the second half. On defense they couldn’t stop the run as they allowed Tech to rush for over 200 yards and nearly 400 through the air. This loss feels like the one they suffered against Kansas State at home last season where they got blown out. It’s back to the drawing board for Mike Gundy who said after the game, “No smoothie today just water. When you get your ass kicked you don’t get a smoothie.” He’s right.

Do I really need to say much more here? This was Kansas’ best chance to win a Big 12 game and they get blown out by a struggling Baylor team who will likely finish ninth in the conference. Outside of a 72-yard run by RB Pooka Williams, the offense was pathetic, and the defense wasn’t much better. I think Kansas AD Jeff Long better start looking for his next head coach.