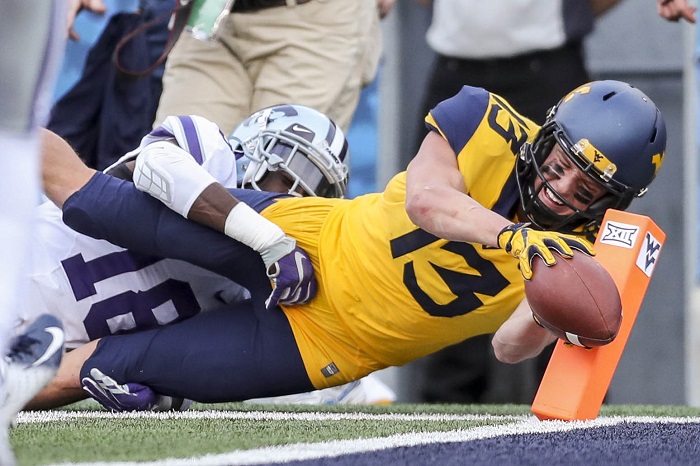 For the first time in the 2018 season, the Sooners are out of the top spot in the Big 12 Power Rankings. It was a close race amongst the HCS staff, but WVU won out by a single point because they’ve looked better and more complete thus far than OU. Granted, the Sooners have played one more game and probably some stiffer competition, but this is why we get paid the big bucks to make these decisions. OU’s defensive performances the past two weeks against Iowa State and Army are fairly concerning, while Tony Gibson has his WVU defense looking like the 2016 version, but unlike that team, this team has a Heisman contending quarterback and a plethora of skill position weapons. The Mountaineers look like they might actually be able to live up to the hype.

Once again, OU fans are ticked off at Mike Stoops. How do I know? Because this article we wrote back in February was trending on the website late on Saturday night. Go figure. And you can’t blame them. Stoops was playing two high safeties for much of the game against Army. WHY?! They run the triple-option! OU only had eight offensive possessions all night because the defense could not get off the field. The offense looks just fine, but considering the Sooners needed overtime to beat a team they were favored by 30+ points against, some of the good will from the first two weeks has faded away over the last two weeks. That being said, this is still the Big 12 favorite in Vegas, but in our Power Rankings, they’ve slid one spot.

What a difference a couple weeks can make, huh? Two weeks ago this team was coming off a loss to Maryland and a hold-on-for-dear-life win over Tulsa. Since then, Texas has won back-to-back games over Top 25 teams at home in USC and TCU. Now, it remains to be seen if this say more about UT than the teams they beat who are both no longer in the Top 25, but regardless, let’s give Tom Herman and the Longhorns credit where it is due. Sam Ehlinger is getting more comfortable by the week, the O-line is holding up, and Lil’Jordan Humphrey and Collin Johnson are becoming legit threats on the outside, while the defense is finally resembling what Todd Orlando did last season. This team has been rising in recent weeks.

Raise your hand if you saw this coming? Don’t lie. After starting off 1-1 with a 20-point loss to Ole Miss and a blowout win over Lamar, Texas Tech found itself as underdogs against Houston and Oklahoma State. But the Red Raiders won both games. Saturday’s win over Oklahoma State, their first in Stillwater since 2001, was shocking as the two-touchdown underdog held Mike Gundy’s offense scoreless in the second half. The balance is there between the pass and run game (46 attempts of each) and true freshman QB Alan Bowman passed his first Big 12 road test with flying colors. Kliff Kingsbury’s seat is still warm, but a couple more of these and it will start to cool down significantly.

TCU has now lost two-straight games for the first time since 2016. And for a second straight week, the Horned Frogs unraveled in the third quarter, getting outscored by Texas 14-3 on Saturday. Shawn Robinson also had three more turnovers against the Longhorns, with two interceptions and a lost fumble. While he’s certainly able to shrug off these mistakes, they are becoming a trend, which is concerning. Gary Patterson will get this team back on track, but it’s not playing typical TCU football these past two games, so they had to slide.

Iowa State edged out Oklahoma State for the 6th spot by a single point. Why? Because a single HCS voter picked Iowa State third in his Power Rankings, while everyone else had the Cyclones at 7th. I will protect this person’s identity. Anyway, Iowa State beat Akron on Saturday 26-13 for its first win of the season, but the Cyclones have not looked like their 2017 selves, at least not yet. Sure, there is plenty of football to be played. But issues such as untimely penalties and turnovers, two things Matt Campbell hates, has nagged this team so far this season. Now, the Cyclones go on the road to face TCU, a team they upset at home last season, in a match up that has big implications for both teams this fall.

From No. 3 down to No. 7. It was that kind of performance on Saturday night for the Pokes. All the good vibes from the Boise State win came crashing back down to earth after the wholly uninspiring loss to Texas Tech at home on Saturday, their first against the Red Raiders in ten years and first home loss to Texas Tech since George W. Bush’s first year in the White House. The Cowboys defense didn’t build on last week’s dominance over Boise State, allowing Alan Bowman to throw for 400 yards, while also giving up nearly 250 rushing yards. On offense, Taylor Cornelius took a step back, and while Mike Gundy puts a lot of that blame on the offensive line for not protecting him, that might bring up a new problems moving forward, with Iowa State, TCU and Texas still on the schedule, teams with better pass rushers than Tech.

Baylor is now 3-1 on the season after beating up on Kansas on Saturday. The Bears defense looked improved, especially the run D, which held Kansas to zero rushing yards in the first half. Granted, it Kansas, but considering how many people were calling for the ridiculous upset over the weekend, maybe there’s more value there than we realized. Charlie Brewer threw three touchdowns as he appears to have solidified the starting quarterback job. He’s comfortable with his weapons, as he completed passes to eight different players on Saturday. Jalen Hurd is still being used at wide receiver, but Baylor is also wise to line him up at running back, where he racked up over 2,000 yards during his career at Tennessee. The weapons are there and this team is improving by the week, but now it just needs to prove that against a better opponent. And just like that, “hello Oklahoma” this weekend.

If it wasn’t for the team below them, K-State would be last in our Power Rankings. In fact, one voter said he was putting KU and KSU in a tie for last place. The Wildcats are a mess right now, not just on the field but off the field as well. Bill Snyder’s postgame press conference after the 35-6 loss to WVU was difficult to watch, when he pushed the blame to the players and said Alex Delton played “extremely well”. Regardless, this team is on the verge of having its season unravel, while finishing under .500 and missing a bowl game for the first time since the Ron Prince era. That would be ugly, huh?

After talking smack for much of last week, at least a few, the Jayhawks played their first Big 12 game of the season and lost 26-7 to Baylor. It wasn’t the equivalent of some of the thrashings KU suffered last season, but David Beaty can’t go 0-9 in the Big 12 if he wants to keep his job, and yesterday was one of his better chances to pick up one of those conference victories. It didn’t happen, so KU sits in the basement until proven otherwise. Oh, and Rutgers’ 42-13 loss to Buffalo didn’t help KU’s cause any.

Big 12 Week 4: The Good, the Bad, and the Ugly
Big 12 Football Mailbag: Contenders, Pretenders, Snyder Sizzles and More!
To Top