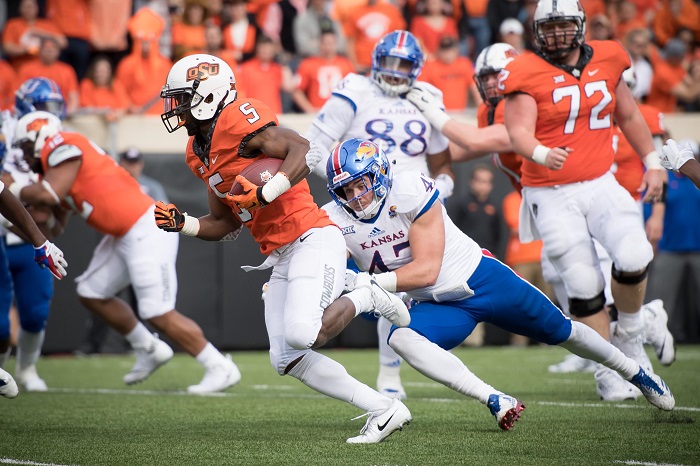 Here is everything you need to know in our Kansas vs. Oklahoma State preview and prediction.

There’s only so many time I can mention Taylor Cornelius and Justice Hill as key players so this week I’m going with the coordinators.

Welcome to the Big 12, Coach Knowles!  After an impressive showing against Boise State the new look Oklahoma State defense got shredded by Kliff Kingsbury and the Texas Tech Red Raiders.  Knowles scheme was unable to get consistent pressure against Tech’s quick passing attacking with Alan Bowman, a true freshmen, picking apart the blitzes and hitting receivers in the void left by attacking defenders.  The Jayhawks aren’t even on the same planet as the Red Raiders when it comes to offensive talent and scheme but Big 12 teams know offense, and Jayhawk OC Doug Meachem will be looking to exploit the same weaknesses that reared their heads last week.  When he was hired Jim Knowles said he was excited to go against the powerful offenses in the Big 12 but right now he’s sitting at 0-1 staring down a gauntlet of elite play callers with more experienced quarterbacks. Knowles needs a good showing from his squad to get their confidence back up before they get into the meat of the season.

Over Yurcich’s tenure in Stillwater Oklahoma State has won a lot of games on the strength of his offense, but gone is gunslinger Mason Rudolph.  The new starter is cut from a different cloth but can still be capable when given the chance to succeed. For OSU to have a chance in games this season Yurcich has to realize that Taylor Cornelius isn’t Rudolph, and the bread and butter plan from the last three years of throwing the ball 35 times a game has to go out the window. Cornelius has legs, and his ability to run the ball was a significant factor in the win over Boise.  The use of the zone read also helped Justice Hill find room to run. Wholesale changes to the offense aren’t needed, but tweaks are. Extra blockers in the form of Cowboy Backs are needed for pass protection behind a shaky offensive line and also as lead blockers for Hill. With the surprise departure of inside receiver Jalen McCleskey making the shift to a more power based plan should be easier. If Mike Gundy isn’t on board with dusting off the Diamond Formation made famous by Dana Holgorsen in his time at OSU or a similar change Yurcich needs to insist it is needed. Cornelius can’t win with the scheme they used against Texas Tech and that’s not a knock on the young man it’s just that’s a square peg/round hole scenario. Yurcich is more talented as a play caller than a lot of Cowboy fans give him credit for, and he needs to realize he needs to try to fit the scheme to his players, not vice versa.

After not playing in the opener Williams became the first Kansas freshmen to have consecutive 100 yard games to start his career.  He only had 14 carries for 89 yards against Baylor but he has the speed to take runs to the house if the defense is out of position.  He should have a big day against Oklahoma State’s defense with starters Calvin Bundage and Malcom Rodriguez getting dinged against texas Tech last week.  With the Cowboys best linebacker and safety not at 100% Williams should find success when he breaks into the second level.

The Jayhawks may not be he most talented team in the Big 12 but there aren’t many players better than Dineen.  So far as a senior he is averaging 13.3 tackles a game which is good for tops in the conference. His opponent this week doesn’t do much to think his production won’t continue along that line. The Cowboys are weak along the offensive line so expect Dineen to have free shots at Justice Hill and also come free often to pressure and sack Taylor Cornelius.  If he can have a big day and force negative plays and turnovers he’ll give his team a great shot to get the victory.

There’s no nice way to put it, Kansas has been atrocious for a long time now.  The good news is they are showing signs of improvement this season. Kansas Coach David Beaty is 0-3 against Oklahoma State but the Cowboys look vulnerable this season and he has his Jayhawks playing with more confidence.  If his defense can have success early against a shaky OSU offense and Peyton Bender can make the right throws to beat the aggressive defense aimed at stopping Pooka Williams the chance for the first Big 12 win since Texas in 2016 is a definite possibility.

Oklahoma State has been Dr. Jekyll and Mr. Hyde the last two games, beating up a good Boise team in all three phases of the game to looking inept against Texas Tech and getting out scored 17-0 in the second half.  With the grumblings around the Cowboy fan base about wanting a quarterback change and the sudden transfer of senior wideout Jalen McCleskey it seems like maybe there is a growing disfunction in Stillwater. Mike Gundy issuing a warning to the media that anyone asking members of his team questions about McCleskey’s move would lose the privilege of interviewing players just added fuel to the fire that maybe not all is okay inside the locker room.  Was last week poor play just a case of a team having a bad game against a good opponent or is something more disastrous brewing in Stillwater?

Despite being embarrassed last week the Cowboys are a better team than Kansas.  Under Gundy OSU has a history of dropping an early game and then making the required changes to be a good team.  The last three seasons they have lost their Big 12 opener, and in 2016 and 2017 the went on to win 10 games. While I don’t see double digit wins for them this year I don’t think they play as poorly again this season, especially not the week after having their pride stepped on.  Kansas has the guys to make this a closer game than Cowboy fans will like, but OSU will pull away at the end. Pooka Williams will have a huge game for the Jayhawks against a leaky OSU defense as they run him all game looking to keep the Cowboy offense off the field.