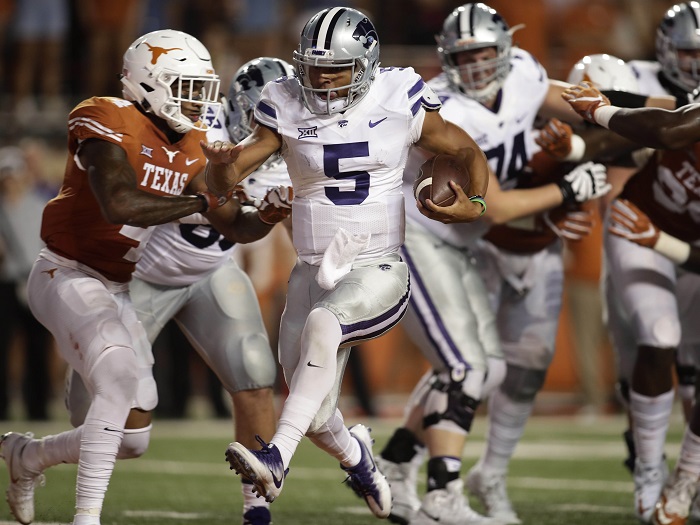 Here is everything you need to know about the upcoming Big 12 Conference game in our Kansas State vs. Texas preview and prediction.

Fun Fact: The Longhorns are looking for their first winning streak longer than three games since the 2013 season when Mack Brown and UT won six consecutive games after starting the year 1-2. But the Wildcats have lead the all-time series, 10-8, including a 9-5 margin since the two became Big 12 foes.

He’s averaging over five catches per game and nearly 90 receiving yards per game and leads the team in catches and receiving yards. Quickly, Humphrey is becoming one of the most feared wide receivers in the Big 12 Conference. He has caught a TD pass in three straight games, including his 38-yard touchdown against TCU. His three straight games with a TD is tied for seventh-most all- time. John Harris was the last Longhorn to have a longer streak, catching a TD in four straight games in 2014.

Johnson is the key cog of the front seven, which will be incredibly important against a Kansas State team that will want to run the ball first, second and third. Johnson is currently second in the Big 12 Conference in tackles for loss (6.0). He’s second on the team with 25 tackles as well. The senior will be expected to lead this unit in a tough road environment.

So Skylar Thompson is out, Alex Delton is in, per Bill Snyder’s orders. In limited time this season, he is completing 48% of his passes for 259 yards, one touchdown to two interceptions. As a runner, he’s piled up 116 yards. Delton came in last year during the team’s bowl win over UCLA and saved the day, leading the team to a 35-17 win in the Cactus Bowl thanks to 158 rushing yards and three rushing TDs.

As noted above, Texas has a pair of junior studs at WR in Humphrey and Collin Johnson. Shelley is going to have to go up against one of them, with Parker trying to defend the other one. Both Parker and Shelley are 5’11” and 5’9” respectively, while Johnson and Humphrey are 6’4”. Kansas State’s secondary has had its issues so far this season and the pressure will be on them again this season.

The Longhorns have strung together two-straight wins over Top 25 teams and are feel good heading to Manhattan. But Texas can not get caught looking ahead to OU or playing down to competition. Tom Herman’s teams have had a tendency to do that in recent years. The Longhorns defense needs to be prepared to see some things with Alex Delton they have yet to see from the K-State offense under Skylar Thompson. More of the run game, less of the pass game, which is more of Bill Snyder’s style anyway. On offense, Sam Ehlinger needs to continue his forward momentum from recent weeks and use his wide receivers to open the field and then set up the running game. The offensive line has been improving each week under Herb Hand and if that continues this weekend, Texas will roll.

Kansas State has struggled on both sides of the ball this season. If they can get the front seven of the defense going, that would be a good start. Texas’ offensive line is improving but still a work in progress. However Kansas State currently ranks last in the Big 12 Conference in sacks. But the Wildcats will need to get some pressure on Sam Ehlinger, create a tough road environment for the Texas offense, and then methodically move the ball on the ground under Alex Delton. Kansas State doesn’t have a very good stable of wide receivers and Texas has an excellent secondary, so the Wildcats will have very little luck moving the ball through the air. K-State needs its offensive line to play the game of its season to date, win the time of possession by a wide margin and keep the ball out of the Longhorns’ hands.

Prediction: Texas 31, Kansas State 17. The Longhorns are playing some damn good football right now, while the Wildcats are, to simply put it, not. K-State’s offense was anemic last week against WVU and now has to go up against a better defense in the Texas Longhorns. K-State is a team in disarray, while Texas has found itself on the sudden upswing. Sure, Bill Snyder can always shock you when you least expect it, while Tom Herman’s team can play down to competition, but I don’t see that happening in this one. Texas rolls and improves to 4-1 ahead of the big match up against Oklahoma.