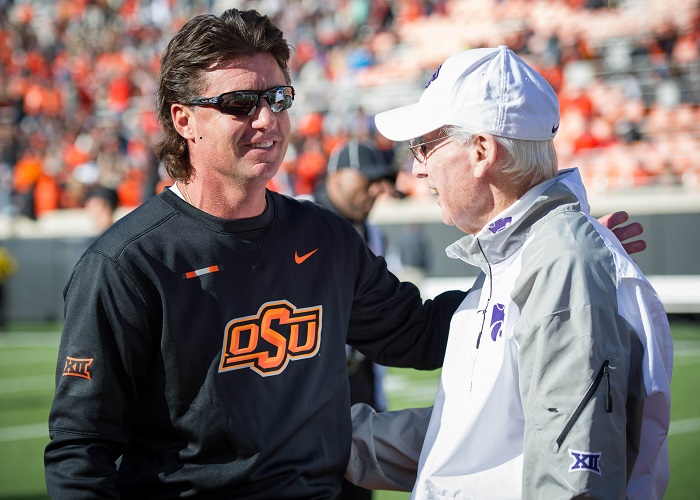 There are probably some that don’t give a rats you know what about how my weekend was. If you do care or even if you don’t, I am going to tell you anyways. Friday, I went to bed early because I was heading to Lubbock Saturday morning for the West Virginia/Texas Tech game that kicked off at 11 AM. I ended up leaving my house at 2 AM to make the 6 hour drive up. After the game I stayed in a hotel to rest up and catch up on some more Big 12 football. I ended up falling asleep on my laptop during the USC/Arizona game and when I woke up, I called it a night and caught up on some sleep. Sunday, I made the fun drive back home to wrap up the weekend. On to the mailbag!

@FitzDaddy85 asks: Judging by one game, does Carter Stanley (Kansas QB) look better than Delton and Thompson at KSU?

Duke: To be honest, yes. Carter threw for 247 yards and 3 touchdowns through the air against Oklahoma State this past weekend. Do I think Skylar Thompson or Alex Delton can put up numbers like that? I don’t after watching the way both guys have played up to this point. Don’t get me wrong the Kansas offense has been a mess at times but K-State has somehow been even worse offensively. Carter Stanley isn’t going to put any fear into defenses but at least I know he can throw the football a bit. I can’t say the same for the crap show that is currently the Kansas State offense.

@Shroudedllama asks: Was that you that called into the coach’s conference call to troll Gundy?

Duke: If that was me, Pete would have still been yelling at me at this very moment if I would be dumb enough to claim I was from HCS and asked a question like that. In case you are living under a rock, a couple pranksters found their way onto the weekly Big 12 coaches conference call and took a few shots at Gundy after the whole Jalen McCleskey transfer deal last week. Even though it probably wasn’t a good look (Especially for the people running that thing), I thought it was hilarious. You could tell Gundy was thrown off a bit just like everyone else who heard that. It was more interesting than anything else I heard on that conference call though. So, kudos to the folks who were able to pull that off. Deserving of a beer or two on me.

@PeittFarms asks: WVU is ranked 3rd in the nation for TFL this season, compare this Mountaineer D-Line to previous years. What’s the difference?

Duke: Back when I really first started covering football (2016), WVU had a fantastic year under DC Tony Gibson. Last season obviously was a disappointment as the defense gave up over 200 yards per game on the ground and overall, they looked very undersized. I thought WVU did a great job adding in some key pieces up front that to me, pass the eye test. Ezekiel Rose, Reese Donahue, Jabril Robinson, Kenny Bigelow Jr. and Dante Stills have all played key roles in making that possible. Right now, the Mountaineers are allowing 131 rushing yards per game which is around a 70 yard improvement from last season. That’s huge! For me, that was the biggest question mark for this defense and they have certainly answered it with authority thus far. I really like the way this defense is playing (I’ll give them a pass against Tech with the QB change) and if the defense keeps playing like this, you will see this team in Jerry World playing for a Big 12 title.

@jonkev50 asks: Are there any other Big 12 coaches on the hot seat besides David Beaty at Kansas?

Duke: At this very moment, I have one coach in mind besides David Beaty. Maybe it is best for some of you to remain seated for this, but I am looking right at you Bill Snyder. Kansas State appears to be getting worse every season since 2016 and the negative trend appears to be true for this season as well the way things are going for the Wildcats. Here are the regular season finishes since 2016. 2016: 8-4, 2017: 7-5 and so far in 2018 they are 2-3. Does anyone think that this team will win 4 more games in conference play to get bowl eligible? Because I don’t see it. Every week it seems like we are talking about Kansas State in a negative way on the field and even off the field with Bill Snyder’s post-game comments. Bill Snyder wants Alex Delton in at QB and the rest of the staff wants Skylar Thompson in at QB. The staff can’t even agree on at QB for crying out loud. I truly believe that Snyder has lost a few steps and like I said a few weeks ago, father time catches up with all of us and I think that time has come for Bill Snyder when it comes to coaching this program. I doubt Bill ever gets fired because I believe he will retire when he wants, and I think the time is coming after the season ends.

@RPTexan asks: Were you more surprised by Tech’s no show in the 1st quarter or great effort in coming back to make it a game in the 2nd half?

Duke: I will say the first quarter because I though entering the game, Tech would be able to score points. A top 25 team comes to your house and you come out flat. I mean absolutely no energy on either side of the football. Texas Tech was down 28-7 at the end of the first quarter and WVU had 279 yards of offense. I wanted to just walk out of the stadium and find the nearest tailgate to start drinking the way that game started. I just wanted a good game is all. Is that too hard to ask for? Luckily the last 3 quarters were much better but the first quarter is still a head scratcher for me.