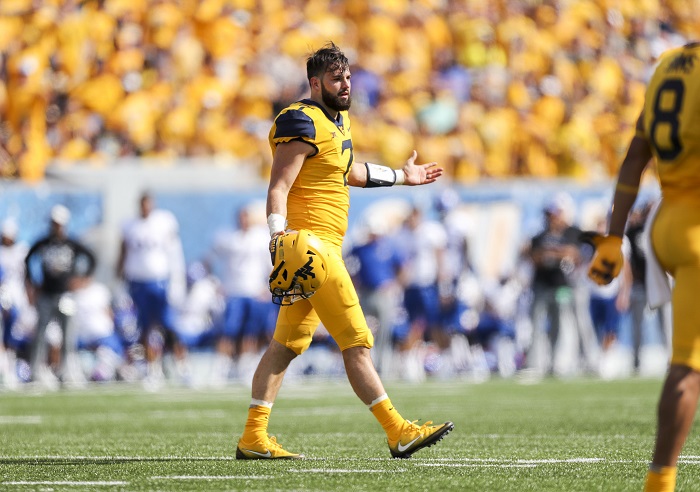 West Virginia quarterback Will Grier has been in the 2018 Heisman discussion since the odds came out shortly after the 2017 season came to an end. The Mountaineers welcomed back as explosive a wide receiver corps as any team in America with Gary Jennings, David Sills, T.J. Simmons and Marcus Simms. With Grier at the helm of the offense, and Dana Holgorsen and Jake Spavital’s offensive minds, this offense was going to be able to do just about whatever it wanted.

For the most part, that’s been the case this season, but Saturday’s 38-22 win over Kansas was a step back for Grier and his Heisman hopes moving forward.

A win is a win, but Grier threw three interceptions in the red zone in the first half. WVU was up 21-7 at halftime, but it could have very well been 42-0 had Grier done a better job taking care of the ball. The quarterback’s mistakes allowed the Jayhawks to hang around in this game, and he knew it, saying after the win, “We’ve got to be better in the red zone. I got to be better on not forcing things. It will be fixed going forward.”

It needs to be, because as West Virginia’s schedule toughens up, these mistakes will only be amplified against defenses like Iowa State’s next week in Ames, then also against the likes of the Texas Longhorns and TCU Horned Frogs.

Head coach Dana Holgorsen seemed less concerned after the win, saying, “He has the confidence to make any throw and every throw. That’s why he’s a hell of a quarterback, but those windows become small. I thought their defenders did a better job of attacking the ball than our receivers did.”

That may partially be the case, but to not put any of the blame on Grier is inaccurate. He was forcing into double and triple coverage at times down near the goal line, which were all unnecessary risks based on how WVU was dominating the game. Also, it felt like each time Grier had one of his three interceptions, a score would’ve demoralized the Jayhawks. However, with each interception, the Jayhawks were re-energized and came back to life.

Also, the playcalling down near the goal line by Spavital is fair to be questioned. The second and third interceptions from Grier were thrown in the middle of the field with the ball marked yards from the goal line. The first interception came on a third down at the 6 after Leddie Brown had a loss of four yards. WVU went pass, run (loss of four), and then interception. On the third interception, the Mountaineers lost three yards on first down on a run attempt, then came the interception, again in the middle of the field. Neither time did West Virginia work the edge or corner of the end zone on the ground or through the air. Let your team speed and athleticism dominate the game.

It also doesn’t help WIll Grier’s Heisman chances considering Alabama QB Tua Tagovailoa now has only seven more incompletions (25) than he has touchdown passes (18) for the No. 1 ranked Crimson Tide. He’s clearly the heavy favorite as we enter the middle of October.

But maybe Dana Holgorsen said it best after the game. “We’ll take the sloppy win and go home.”