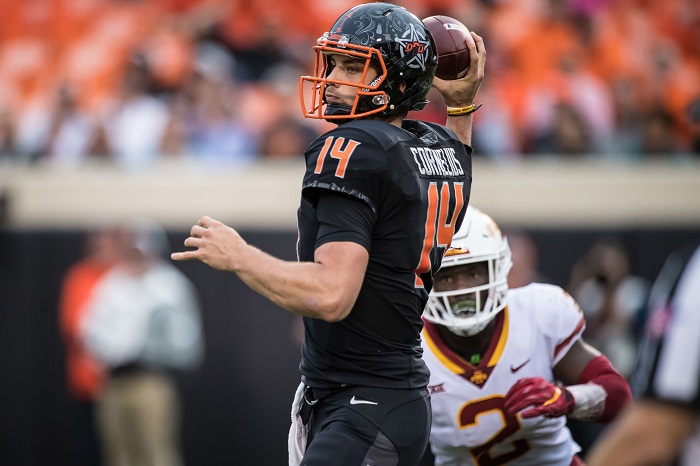 What to do in Stillwater?

Mike Gundy has a problem. His team isn’t very good.  After three-straight seasons of double-digits wins, his 2018 Cowboys sit at 4-2 with three of the victories coming against over-matched teams, while both losses were frustrating, embarrassing or both.

The Boise State win was solid, I give them that.  It showed what the team can be if all the pieces are clicking in all three phases of the game, but you can’t count on an A+ performance like that again.  And even if you get one, can they beat OU, Texas, or West Virginia? Reasonable thought would say “no”, and with the remaining list of conference games, it’s difficult to find many of those “guaranteed wins” on the schedule.

And that brings us again to the question. What to do in Stillwater?

There’s a laundry list of problems with the Cowboys every Saturday. The defense got shredded versus Texas Tech and Iowa State, and broke down in coverage multiple times against Kansas. The special teams has been anything but special after shining against Boise. A roughing the punter penalty against the Jayhawks extended a drive that lead to a touchdown, and a dropped punt early against the Cyclones that ended up a safety seemed to be the point in which the game turned against OSU.  The offensive line was believed to be better than last year’s going into the season, but has been exposed as still a work in progress with Justice Hill’s abilities alone saving the running game and making it at least respectable most games.

But most of the blame seems to get placed on the shoulders of quarterback Taylor Cornelius.  Not by the team or the coaches, but by the the fans. I get it. Mason Rudolph is a hard act to follow. Especially when his forte, the deep ball, is your weakness. Cornelius has a stronger arm than Rudolph, which is evident on his short and medium passes.  He can throw a 25 yard out route across the field while on the run. But he struggles with accuracy on his deep passes where he seems to overthink, hesitate, and then under throw the ball.  He’s been bailed out by his receivers a lot on those long bombs, especially Tylan Wallace who has made defensive backs look silly every game this season. He also tends to hold the ball too long and seems to have trouble sensing pressure. All of this adds up to some frustrating performances.

But I’m not going to argue whether Cornelius is good or not, I’m going to talk about how swapping him out for Spencer Sanders, something I’m seeing called for more and more, would be a bad idea.

Yes, Sanders looks like the real deal.  A four-star dual-threat quarterback out of Texas power Denton Ryan, Sanders also excelled at track and field and was the district offensive player of the year in basketball.  His high school highlight videos are electric. He’s an athlete and a competitor and will almost assuredly raise the level of play when he steps on the field for the first time as a Cowboy.  The fact that Texas Tech and Iowa State beat OSU while playing true freshmen quarterbacks has just made the rumblings louder.

But playing him right now would be a mistake by Mike Gundy, who for the first time in a long time is suddenly chasing bowl eligibility instead of trying to compete for a conference championship.

This week’s game versus Kansas State is winnable even with the problems. If the Pokes play like they did against Iowa State, the Wildcats and Bears are the games left on the schedule that Oklahoma State should win.  The Cyclones’ defense is better than what either of those squads field and OSU managed to score 42 points, even in its dysfunction. Repeat that performance against KSU and BU and the Cowboys get to six wins and bowl eligibility.  Play a little better and you have a chance to beat TCU as well to end the season.

I understand that’s not exactly the year Cowboys fans hoped for, but it’s probably a realistic expectation as we approach mid-October.  Going 3-3 in the final six games should be the goal. Does making a quarterback switch to Sanders change the season enough that its worth burning his redshirt year by playing him the rest of the season?

Absolutely not. Unless you think Sanders can run the table and get OSU to 10-2 playing him now is more risk than reward.

Oklahoma, West Virginia, and all of a sudden Texas, are on a different level than the rest of the Big 12 right now and a change at quarterback isn’t going to put OSU up there with them this season.  Would a more mobile passer with a quicker trigger help mask the offensive line problems? Probably a little, but it also opens up what you hope is a stud quarterback for the next few season to chance of injury, something Gundy mentioned as a reason he doesn’t want to play the true freshmen QB. Gundy has experienced that before with true freshman Wes Lunt who looked the part of a decent gunslinger replacement for Brandon Weeden until a dislocated kneecap derailed his season. He ended up transferring to Illinois and never looked the same as he did in those first five games when he showed so much potential.

Sanders is fast, but he’s not fast enough to never get hit or sacked.  Cornelius was sacked seven times against Iowa State, who only had 6 sacks for the year coming into the game.  But at 6’6” and 230lbs he can absorb the punishment. The fans are mad at Gundy right now, but they would be absolutely LIVID if a defensive end bent Sanders’ knee backwards and he never had a chance to become the player they hope he becomes.

Also, let’s not forget that playing Sanders isn’t going to make the defense any better. Remember, OSU scored 42 on Iowa State and lost because the Cyclones, who hadn’t scored more than 27 points in a game this season, scored 48.

No, in my opinion you stay the course, at least for one more game.  If the offense is highly questionable against a pretty bad Kansas State team or OSU walks away with a loss (or both!) you make the switch then, but not to Sanders.

Sanders is the future in Stillwater, Brown is a band-aid.  A one-year rental either this season or next. If Oklahoma State falls to 4-3 in Manhattan, you give the reins to Brown and hope he can spark the team to 2 more wins.  He has game experience as a two-year starter at Hawaii. Specifically his experience is behind a porous offensive line as well, so he’d be thrown into a fire he’s dealt with before. The bye week would let the Cowboys tweak the offense bit to what they think he can handle before Texas rolls into town on Homecoming.

The hope here would be of course getting two more wins, presumably against Baylor and TCU, to get the team to a bowl and that all important extra month of practice that would greatly help all the youth the Cowboys have.

If it comes down to it, Gundy has experience with being forced to play his prized recruit earlier than he wants to. He pulled the redshirt off of Rudolph for the final two games of 2014 after starter JW Walsh and then backup Dax Garman both got injured behind a questionable line.  Rudolph went 2-1 to fishing the season, losing to Baylor and famously beating OU in Norman with an assist from Bob Stoops and Tyreek Hill before beating a decent Washington team in the bowl game. But Gundy waited until the he had no other choice in the matter and would’ve played Garman the rest of the season had he not got concussed against Texas.

But playing Rudolph only ended up being the right call only because of the miracle in Bedlam.  Had that turned out differently and OSU ended the season 5-7 with no bowl, the fans would have roasted Gundy about burning one of his years while watching Rudolph win double digits games and rewrite the OSU record books.

The only way Sanders should see the field would be if the Cowboys, led by Dru Brown, fail to beat Baylor.  At that point they would most likely be on a three-game losing streak, be 4-5 and reeling. The risks associated with playing Sanders suddenly don’t weigh as much against the pros of giving him a chance the last three games and hoping he can pull an upset and save the season.  In this scenario neither Brown or Sanders will have played in four games and thus saved their eligibility for next season and compete for the starter job.

I’ve seen a lot of fans say not switching from Cornelius is throwing the season away but that’s not true, at least not yet.  But playing Sanders right now IS throwing away one of his seasons with very little chance of changing the trajectory this year.  The time may come where that changes, but right now Gundy is making the right choice by sticking with The Corndog.

Oklahoma LB Shane Whitter Out For Season With Shoulder Injury

According to OUInsider’s Parker Thune, Oklahoma junior linebacker Shane Whitter has suffered a left shoulder injury that will require surgery and force...

The Texas Longhorns crushed West Virginia on Saturday night, but now, it’s all about the Red River Rivalry. Join Greg Schnos as...