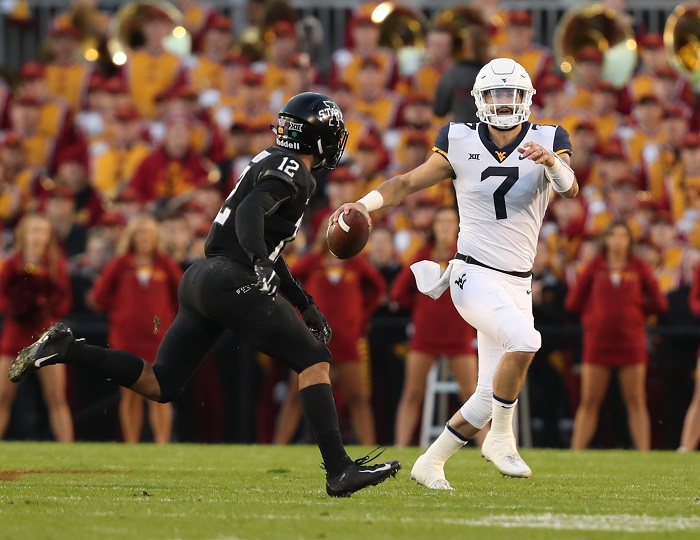 I hear it all the time, “Who has the best conference in college football?” SEC? Big 10? ACC? What about the Pac-12? Very rarely are you going to hear the words “Big 12” coming out of someone’s mouth in that conversation. Whether you do it or not, there are plenty of folks out there who love to bash the Big 12 conference (cough, Paul Finebaum, cough). Another week of football is in the books. In the Big 12, there is never just a normal weekend and that once again proved to be true this past weekend. What a crazy weekend of college football. From upsets, to eye sores, there was some good, some bad and some downright ugly.

No Alan Bowman? No Problem. It’s not often that you will see Texas Tech run the football more than they throw it. But that’s exactly what they did on Thursday night because they rushed the football 43 times and just threw 27 passes. QB Jett Duffey wasn’t spectacular with his passes, but he was very effective running the football as he led his team with 83 rushing yards. He also had a key rushing touchdown that put Texas Tech up with about 7 minutes left in the game. Give RB Tre King some credit too, rushing for 60 yards on 10 carries. Most importantly, HOW ABOUT THAT DEFENSE? Tech held TCU in check running the football as they allowed just 121 yards on the ground to force TCU QB Shawn Robinson to beat them with his arm. They gave up some yards through the air but mostly importantly, they kept TCU out of the endzone for most of the game. Holding a team to 14 points in the Big 12 in this conference is damn impressive so kudos to DC David Gibbs.

Kansas State only threw the football 22 times and beat Oklahoma State by 19 points. That’s classic Kansas State football under Bill Snyder. This may not be a classic Bill Snyder team, but they got a win which is all that matters here. 130 passing yards isn’t anything good, but you know what is? How about rushing for 291 yards? That’s exactly what Alex Barnes, Skylar Thompson and Dalvin Warmack did to the Oklahoma State defense. 291 rushing yards is going to win you some ball games. The Wildcat defense kept OSU RB Justice Hill quiet all game long (He had just 11 carries) which was key because they made Taylor Cornelius try and beat them with his arm. They held Oklahoma State to just 12 points and allowed just one touchdown. This was probably the best game Kansas State has played all season outside of the USTA game. Now, the Wildcats still have a decent shot at making a bowl game.

The bad news is that starting QB Sam Ehlinger went down early in the game due to a shoulder injury. He sat out the rest of the game and Texas was forced to play backup QB Shane Buechele. The word is that Sam Ehlinger will start throwing next week in practice and should be ready to go for their October 27th matchup at Oklahoma State. Now, back to the game. Buechele was below average against Baylor as he went 20/34 for 184 yards with 1 touchdown and 1 interception. However, WR Collin Johnson and RB Keaontay Ingram came to play leading the Texas offense. Ingram rushed for 110 yards and WR Collin Johnson caught 11 passes for 132 yards and a score. Without those two, I am not sure Texas wins this game. I thought the defense for Texas played well and that’s probably what won the game for the Longhorns. They held Baylor to just 88 rushing yards on 34 carries and held the Bears offense scoreless in the fourth quarter and eventually came up with the stop to win the game. Next up is Oklahoma State but they have a much-needed bye week to get healthy before their trip to Stillwater.

That was a Purdy performance Saturday night from this Iowa State team. You see what I did there? All bad jokes aside, Iowa State QB Brock Purdy is a rising star not only in the Big 12 but in the entire country. Brock went 18/25 for 254 yards and 3 touchdowns. Oh yeah, did I mention he is a true freshman? He had an excellent game and when he connected with WR Hakeem Butler, it was a thing of beauty. For me, the most impressive player on offense was none other than David “The Machine” Montgomery. Montgomery rushed for 189 yards and a touchdown as he made WVU defenders look silly all game long breaking tackle after tackle. The real MVP of this game? Defensive Coordinator Jon Heacock. He had a great game plan and this ISU defense held WVU to just 152 total yards. WOW. Not only that, the Cyclones were able to get to QB Will Grier 7 times and got good pressure all game long. This was by far the best defensive performance I have seen in the Big 12 all season long. This team is a force to be reckoned with.

Let me start by saying this, defensively TCU played well enough to win this game. They held Tech to just 17 points at home. That should be more than enough to win the game. I don’t care what they gave up yards wise because if you hold a Big 12 opponent to just 17 points and you play at home, you should win that game 10 times out of 10. Why they didn’t win this game is easy. They played like crap on offense. Wide outs KaVontae Turpin and Jalen Reagor had good performances, but outside of that, the TCU offense was an eye sore to watch. They had 3 turnovers in Texas Tech territory and 2 of those came from QB Shawn Robinson interceptions. Until this offense gets fixed, TCU will struggle to win ball games. Luckily their defense will be able to keep them in games. Not sure what they can do this season, but I don’t think Shawn Robinson is the answer at quarterback. Maybe he will be down the road, but right now it looks very bleak.

This was a tough one for the Bears. When Texas QB Sam Ehlinger went down, I thought Baylor had a good shot at winning this game. They came close but couldn’t pull it out in the end. QB Charlie Brewer played his tail off throwing for 240 yards and when Baylor struggled to run the football, Charlie had to put even more of the offense on his shoulders. He was able to connect with wide receivers Jalen Hurd and Denzel Mims a few times but outside of that, this offense couldn’t do much. Defensively, the Bears struggled in the first half, but they turned things around in the second half as they shut out the Texas offense. Unfortunately, it wasn’t enough to win the game. The Bears fought hard in this game, but ultimately fell short. Either way, there were some positive things to take away from this one and Baylor just needs to win 2 more games to reach a bowl. The season goal is still very much in tact for this team.

Boy oh boy, where should I start here? How about the defense. They got bullied up front all game long and allowed 291 rushing yards and got beat by a bad Kansas State team that only completed 11 passes. Yikes! In the second half, OSU got outscored 28-6 and I am not sure what happened at halftime, but it wasn’t good. Offensively, QB Taylor Cornelius struggled throwing for 184 yards and 2 picks. He couldn’t connect with his receivers and on top of that, RB Justice Hill was a non-factor. Before you say “Derek, they had to throw the ball because they were down all game.” No, they weren’t down all game, as they were up 6-3 at the half, and in the first half, they didn’t even try and get Justice Hill the football. If I remember correctly he only had five total touches in the first half. How? How does that happen?! I don’t understand. When Taylor Cornelius has as many rushing attempts as Justice Hill, that’s a problem. Justice Hill by far is the best player on this offense and they don’t even try to get him involved at times. In fact, he has been used as a decoy more than anything. This team is going south quickly and after this loss, they look like the ninth best team in the Big 12.

I thought this game would be close and I was dead wrong. West Virginia got dominated by Iowa State at Jack Trice Stadium. There were no excuses for the way this team performed. The defense gave up 244 rushing yards and almost 500 total yards of offense. You’re not going to win many games doing that on the road. As bad as the defense was, the offense was worse. Will Grier and company were only able to gain 152 total yards of offense and went scoreless in the second half. On top of that, Will Grier only had 100 yards passing and was sacked 7 times. This was by far the worst offensive performance of the season. There isn’t much to say about this game besides Iowa State DOMINATED this game. I am not sure what the deal is about this team, but they better wake up because there is still PLENTY to play for this season.