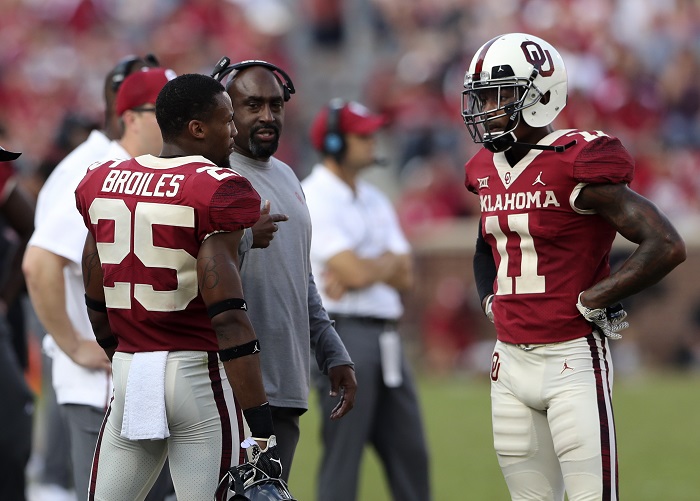 The Oklahoma Sooners still control their own destiny in the Big 12 and an opportunity to make it back to the College Football Playoff is still in front of them. Despite what you’ve heard (from Joel Klatt among others) the road to the Big 12 Championship stills runs through Norman, where the three-time defending champions reside. It’s also where 11 Big 12 trophies sit shining in the trophy case. However, if Oklahoma would like to remain in the mix for their aspirations of capturing their 8th national championship the Sooners must improve on defense.

After the Sooners 48-45 loss to rival Texas on Saturday, head coach Lincoln finally pulled the trigger on long time defensive coordinator Mike Stoops. Since 2015, when Oklahoma had the No. 5 ranked efficiency defense the Sooners have been well worse than average, it was believed that with Oklahoma finally turning the corner in recruiting that Stoops could regain some of that lost magic. After a fast start, the Sooners were unable to maintain consistency this season. In other words, the Oklahoma defense has become much the same as the previous two seasons. Not all of this is scheme related, as the Oklahoma defensive line, which had been a strength through the first five games was pushed around by the Texas offensive line, opening rushing lanes normally for Sam Ehlinger to exploit. Parnell Motley has the bad case of not being able to track a football in the air, and Sooners have seemingly forgotten how to wrap up and take them to the turf.

With all that said, it is safe to say Mike Stoops was no longer the guy Oklahoma needed, he expressed issues relating to players in an interview with the Sports Animal, seemingly refused to recognize the strengths and weaknesses of his unit.  According to a former Sooner player I spoke with Stoops was “outdated”. According to that player, Stoops ran the same plays from the early 2000s when he played. “The exact same, with less Brent Venables”. He simply did not connect with players anymore, and he stubbornly remained the same in an ever-changing game.


So, the next question is: Where do the Sooners go from here? Of course, the answer: anything must be better than before, right? Oklahoma named Ruffin McNeil the interim defensive coordinator and promoted former Broyles award winner Bob Diaco from analyst to Linebackers Coach. Oklahoma currently ranks 96th in total defense, dead last in red zone defense, 99th in 3rd down conversion defense, and 102nd vs the pass. While that is awful, and the Sooners have a lot of things they need to do to improve, there are more than a few silver linings that point to potential success for the Sooner defense down the stretch of the season.  Now, lets look at what each of those things are.


The cupboard is far, in fact very far from being bare. Few people know this, but the Oklahoma defense has more five star players, and blue chippers in general, in their two-deep rotation than the Oklahoma offense does. While in recent seasons, Oklahoma has had to make do with three-star projects and spare parts, that is not the case for the University of Oklahoma in 2018. In fact, Oklahoma has so many highly-touted defensive backs its not funny, from 5-star Robert Barnes and Brenden Radley-Hiles, to Tre Brown, Justn Broiles and more. This unit has been, by far, the Sooners weakest this season, but also seems like it could be the unit with the most potential. If the Sooners can have things click even remotely on the back end it could change everything for the rest of the season. Tre Brown has shown flashes all season long, and many reports indicate he has finally supplanted Parnell Motley as the starter at cornerback. Radley-Hiles has been moved around as well, he has played some safety, nickel and corner since Stoops’ dismissal.

The defensive line will finally get healthy. Oklahoma’s defensive line has played pretty well through the first six games of the season, however this unit was stretched thin with injuries to Tyreese Lott, Kenneth Mann, and Marquise Overton. All of these players are supposed to be back healthy, in addition the Sooners will likely have five-star DE Jalen Redmond back for TCU, who was supposed to be out for the year with blood clots, but is now cleared to play. Suddenly, a unit who played virtually the same 4-5 guys for a three-week period facing nearly 300 plays will get rest and gain some guys back to help them on the back nine of the season.

Also, it hasn’t been all as bad as some might make it appear to be. This Oklahoma defense has shown flashes throughout the season that show you what they can be, like the game vs FAU, and the first half of Baylor as a few examples. In fact, Oklahoma has the Power 5’s two leading tacklers, Curtis Bolton (75 total 12.5 per game), Kenneth Murray Jr (74, 12.3 per game). Also, they have the leading tackler in the nation among defensive linemen as defensive end Mark Jackson Jr has 40 tackles on the year.

Plus, interim defensive coordinator Ruffin McNeil was made for this. In 2007, after the fourth game of the season, the Red Raiders dismissed their DC, allowing Ruffin McNeil to take over as the interim. Texas Tech defense was lethargic at best, allowing three 100-yard rushers against Oklahoma State, and ranking in the double digits in all major Big 12 defensive statistics. By season’s end, Texas Tech was first in total defense, first in passing defense and fourth in scoring defense among Big 12 teams.

Oklahoma has a very young team, a team that needs inspirations, and simplicity, two things McNeil excels at. He has been known to throw out parts of game plans simply because a player is confused about it. He lives by the mantra “players that think are slower than players who don’t”. This is the exact opposite of Stoops, who is a scheme guy, brings exotic blitzes from everywhere, and overall just has a complex scheme that requires players at times to be super human to work out. Also known as a master motivator, McNeil seems built for this moment. But to be fair, I’m not sure Oklahoma can statistically make up that kind of ground in the statistics department this year as he did in 2007 in Lubbock. But if they can simply get average or above average on defense they will be extremely difficult to overcome. McNeil will keep it simple and get the Sooners back to playing with great fundamentals first and foremost.