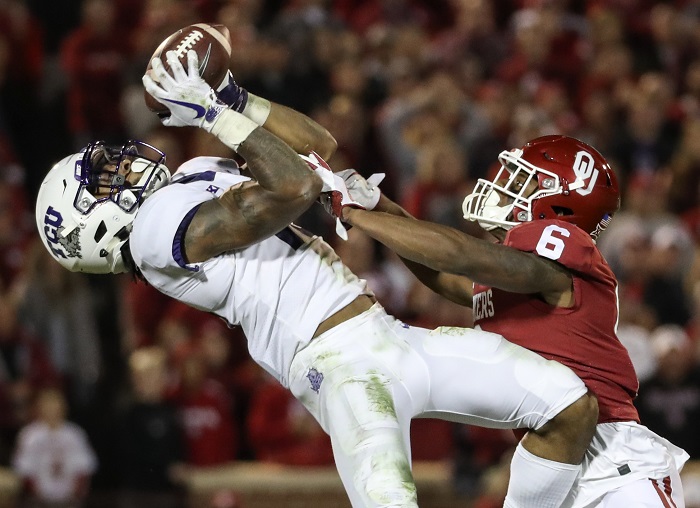 As we gear up for Week Seven of the college football season, several Big 12 teams are getting into the thick of conference play, including one of the best rivalries in the sport. Also, we’re getting a better idea of who the contenders and the pretenders are in the conference. So here are the top five storylines I’m watching in the Big 12 Conference heading into Week Eight.

This is OU’s first game without Mike Stoops as defensive coordinator since 2011. Stoops was fired last week and Ruffin McNeil takes over on an interim basis. What new looks do we get? Any drastic changes? My hunch says not off the bat and that any changes will come slowly over time, but it’ll be interesting to watch and follow on Saturday against TCU. Maybe the team will be more inspired? Considering some of the since-deleted tweets we got from certain players alleging as much, it’s entirely possible. Also, the Sooners have some players who are healthy for the first time in several weeks on the defensive side of the ball.

I’ll be watching Robinson closely in this one. Ever since the Ohio State game, he’s struggled drastically with five touchdowns to seven interceptions. He also had three fumbles, which is tied for second most of any player in the nation. Robinson needs to avoid the big mistake, especially against the Sooners, for TCU to have a change to pull off the upset at home. But are we at the point in Fort Worth where Penn transfer Michael Collins starts getting a more serious look? Robinson’s careless with the ball would strongly make me consider it.

David Beaty fired offensive coordinator Doug Meacham last week. Now, he will be more active with the play calling and that side of the ball. So what does he do? Who plays quarterback? Will the team use the strong stable of running backs, led by true freshman Pooka Williams, more often? We will have more answers on Saturday in Lubbock, but seeing how David Beaty handles that side of the ball will be a interesting to watch for a coach who knows he needs another win or two (at least?) to keep his job beyond this season.

4. Who’s at quarterback for Texas Tech?

For a second straight week, Kliff Kingsbury has played it coy on who is going to be under center for the Red Raiders on Saturday. Is Alan Bowman healthy enough? Will it be Jett Duffey again? Could McLane Carter see some time. We don’t have the answer, but we’ll get a better idea as to what Bowman’s status is based on Saturday. If Kingsbury thinks he can get by without Bowman, maybe he doesn’t play the true freshman, because he will certainly need him coming up since Texas Tech plays Iowa State and Oklahoma the next two weeks.

5. The rest of the country

The Big 12 only has two games this weekend. It’s the quietest Saturday of the season for the conference, so many Big 12 fans will be looking around the rest of the country to see what happens. Texas and Oklahoma fans will be following #6 Michigan at #24 Michigan State, #3 Clemson vs. #16 NC State, #5 LSU vs. #22 Mississippi State, along with #2 Ohio State at Purdue. Those are the games that are likely to play a factor in the College Football Playoff picture. No, I’m not mentioned Alabama and Tennessee, because like every other game Alabama plays, it will be ugly very early.