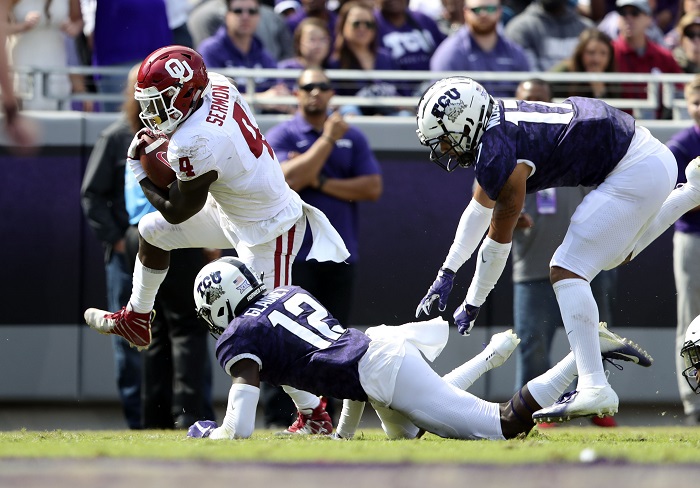 The sky was cloudy when this game kicked off, and just like the sky, the TCU offense was very cloudy to say the least, especially in the first quarter. Oklahoma on the other hand, was red hot on offense to start things off. The first four Sooner offensive drives resulted in four straight touchdowns and before you know it, Oklahoma was up 28-7 over TCU with 8:25 left in the second quarter. Oklahoma quarterback Kyler Murray threw touchdown passes to CeeDee Lamb and Lee Morris while running backs Kennedy Brooks and Trey Sermon both found the end zone as well. It looked like the Sooners were going to run away with this game but as the famous Lee Corso always says, “Not so fast my friend!”

Why? Because the TCU coaching staff decided to make a change at quarterback by putting backup quarterback Michael Collins in and taking Shawn Robinson out. Well, that decision paid off quickly because it only took Michael Collins three plays to find KaVontae Turpin for a 41-yard touchdown pass midway in the second quarter. That was the first offensive score for the Horned Frog offense because the first touchdown was a 99-yard kickoff return by KaVontae Turpin. Finally, the TCU defense stepped up and forced the Sooners to go three and out and when TCU got the ball back, the Horned Frogs hit pay dirt on the very first play of the drive when Michael Collins found wide out Jalen Reagor for a 33-yard touchdown. Suddenly, the Sooners lead was cut to just seven. The Horned Frogs defense forced another three and out and before the half ended, TCU kicker Cole Bunce knocked in a 41-yard field goal as the half ended with Oklahoma leading 28-24.

Both teams traded field goals the start the second half and then the Oklahoma offense took over the ball game. Kyler Murray found Lee Morris for a 27-yard touchdown pass to cap off a six-play drive. After that, the Sooners found the endzone two more times thanks to a Trey Sermon 33-yard run and a 1-yard touchdown pass from Kyler Murray to Carson Meyer.

In fact, the TCU offense did not scored a single point after their field goal with 7:15 left in the third quarter. Give credit to interim Oklahoma defensive coordinator Ruffin McNeill for making some adjustments in the second half because TCU only score three points in the final 30 minutes and looked like a completely different team compared to that second quarter. More importantly, the Sooners offensive stuck to what was working for them, which was running the football. Both Trey Sermon and Kennedy Brooks gashed the Horned Frog defense with big runs and even Kyler Murray had some key runs as well in this one.

The Sooners rushed for a whopping 323 yards and took the air out of the stadium in that second half. Defensively, Oklahoma was able to keep the TCU rushing attack in check and forced Michael Collins to beat them with his arm and eventually the magic ran out for TCU offensively. Oh yeah, that Kyler Murray guy? He’s pretty good too as he went 19/24 for 213 yards and 4 touchdowns. While the second quarter was rocky for Oklahoma, the Sooners absolutely dominated the second half and took care of business beating TCU 52-27. Oklahoma moves to 6-1 on the year and their hopes of reaching a Big 12 title remain intact. Meanwhile for TCU, their struggles continue as they drop to 3-4, and at this point, a bowl game would be a successful season. Moving forward, I expect Michael Collins to start next week when TCU travels to Lawrence, Kansas to take on the Jayhawks.