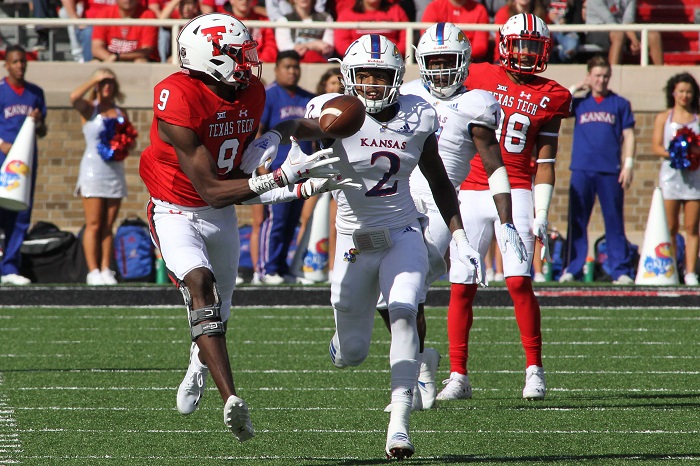 I hear it all the time, “Who has the best conference in college football?” SEC? Big 10? ACC? What about the Pac-12? Very rarely are you going to hear the words “Big 12” coming out of someone’s mouth in that conversation. Whether you do it or not, there are plenty of folks out there who love to bash the Big 12 conference (cough, Paul Finebaum, cough). Another week of football is in the books. In the Big 12, there is never just a normal weekend and that once again proved to be true this past weekend. Even though there were only two games this weekend, there is still plenty to talk about. From good games, to eye sores, there was some good, some bad and some downright ugly.

What a start this team had in this game. For the first quarter and a half, the Sooners played lights out in Fort Worth. Oklahoma was perfect on offense for their first four drives because they resulted in four straight touchdowns. Two of them were Kyler Murray touchdown passes and the other two were rushing scores by Trey Sermon and Kennedy Brooks. Before I knew it, the Sooners were rolling the Horned Frogs 28-7 with 8:25 left in the second quarter. I truly thought at that point that the Sooners would just run away with it but that wasn’t the case right away. Once TCU inserted QB Michael Collins, the Sooners struggled a bit in that second quarter as TCU roared back scoring 17 unanswered points and the Sooners went into the half leading by four.

I am not sure what adjustments were made but give new defensive coordinator Ruffin McNeill some credit because Oklahoma only allowed TCU to score a measly 3 points in the second half. Plus, the Sooners woke back up on offense as they were able to crank out 3 touchdowns of their own thanks to 2 more Kyler Murray touchdown passes and another Trey Sermon score. Overall, the offense ran wild over the TCU defense to a tune of 323 yards with Kennedy Brooks leading the way with 168 yards on the ground. Kyler Murray had a pretty good game too going 19/24 for 213 yards and 4 touchdown passes. Outside of that second quarter, the Sooners defense was outstanding because the Michael Collins magic ran out completely in the second half. This team moves to 6-1 and their Big 12 title hopes remain very alive.

Just 3 weeks ago, QB Alan Bowman was diagnosed with a partially collapsed lung. On Saturday, he went 36/46 for 408 yards and 3 touchdowns. That takes some serious guts right there and he gets a tip of the cap in my book. Once he came back, this offense picked up right where they left off when he was healthy. They weren’t great running the football, but the passing game was more than enough to wipe off the Jayhawks. Wide receiver Antoine Wesley had a monster game catching 9 passes for 155 yards and a score. The offense only scored 3 points before exploding for 3 touchdowns in the second quarter heading into the half up 24-3. While the third quarter was slow like the first quarter (Only scored 3 points), Tech once again kicked it up a notch adding 3 more touchdowns in the fourth quarter and eventually beating Kansas 48-16.

Now how about that Texas Tech defense? I can remember 3 occasions where Kansas had the ball inside the Texas Tech 10-yard line and this defense only gave up 3 points in those drives. Whether it was forcing turnovers or holding Kansas to a field goal, this defense got the job done on Saturday. They held the Kansas run game under 100 yards and forced QB Peyton Bender to beat them and as we all knew, he couldn’t. This defense is playing at an extremely high level and with Alan Bowman back at quarterback, this team is a force to be reckoned with. Up next is a HUGE matchup with Iowa State at Jack Trice Stadium.

I mentioned this in my recap of the game, but this team looked bleak in the first quarter. The offense was pathetic, and the defense gave up 4 straight touchdowns to start the game. Then BAM! Just like that TCU was down 28-7 before they decided to make a quarterback change. QB Michael Collins was able to find KaVontate Turpin and Jaeln Reagor for scores as well as leading the offense down the field for a late field goal before the first half ended. The deficit went from 28-7 to 28-24 in about half a quarter. At that time, I thought, we have a ball game again but as usual I was wrong. The Michael Collins magic ran out and the Oklahoma offense took off once again as they outscored TCU 24-3 in the second half and when the final whistle blew, it was 52-27.

While the Michael Collins experiment was nice for a half a quarter, it’s not enough to cover the fact that this team played terribly for the other 3 and a half quarters. In fact, both Shawn Robinson and Michael Collins combined went 10/25 for 163 yards and 2 touchdowns along with a pick. Completing 10 passes against Oklahoma isn’t going to cut it offensively. Meanwhile, the defense gave up over 300 yards rushing and let Oklahoma QB Kyler Murray have his way with them. Overall, if you give up 52 points and complete 10 passes, your probably on the wrong side of the scoreboard. This team is still searching for answers and a bowl game seems like a good season at this point for TCU if they can get there.

Wow, I am really at a loss for words at this point. Kansas is well, Kansas as we all know. Let’s start with the offense. QB Peyton Bender played the entire game and went 18/41 for 221 yards with 2 touchdowns and an interception. I am no math wizard, but he completed under 50% of his passes in this game and it was obvious he had accuracy issues. Yet Head Coach David Beaty never made a quarterback change. RB Pooka Williams Jr. had some nice runs but other than that, the offense was horrible and even worse to watch. Kansas fired offensive coordinator Doug Meacham for this? What? That must be the most Kansas football mover ever.

Kansas had the football with 10 seconds left in the first half down by 21 on the Tech 41 yard line and called their final timeout before they even tried an offensive play. They followed that by an incomplete check down pass and a run to end the half. WHAT?

The defense wasn’t much better, but they did manage to get 3 turnovers and put the offense in great field position a few times, but it didn’t matter because the offense was so bad. This team is a sinking ship right now and if I am AD Jeff Long, I am looking for a head coach ASAP. I have seen enough of the David Beaty era and it’s time to move on.