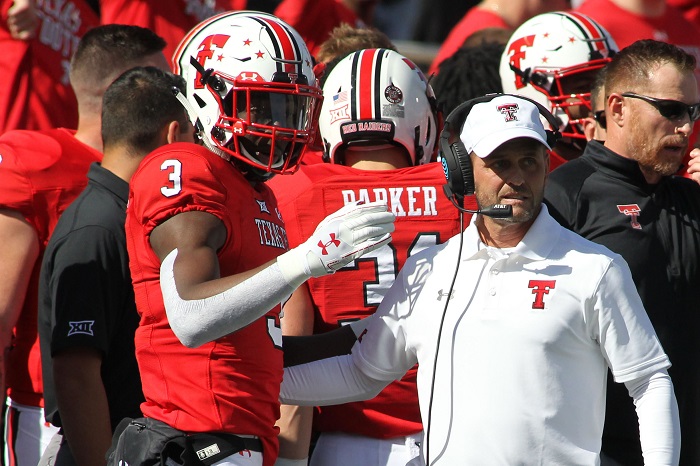 There are probably some that don’t give a rats you know what about how my weekend was. If you do care or even if you don’t, I am going to tell you anyways. Friday, I relaxed and rested up for another great weekend of college football. Even though there were just two Big 12 games this past weekend, I got my work done early for the site and was able to watch games and enjoy them without being on twitter every second of the game. I wrapped up the weekend watching some NFL games before heading back to work for the week. On to the mailbag!

@mlevere asks: Is Texas Tech’s defense really that good or is it just a byproduct of their schedule to this point? Now that we know who TCU and OSU are alongside Kansas.

Duke: I saw someone comment on this question and I would agree with that person had to say. Although I am not sure why he answered a question in my mailbag but that’s a totally different conversation. So, looking at the numbers here it is very interesting. If you look at total defense, Texas Tech ranks ninth in the Big 12. They are dead last in passing defense (In the Big 12) and third in rush defense. I think if you watch them play it holds true to what you see. I don’t think it’s any secret that Texas Tech struggles against the pass. Go watch the Ole Miss and Houston game but I will say they have improved since then. Does lower competition boost those numbers a bit? Sure, but I would go with what your eyes are telling you. Here are some interesting stats to counter those defensive numbers. Tech is allowing opponents to convert just 30.8% on third down which ranks second in the conference. They are also third in the Big 12 in red zone defense. So, this tells me while teams may have some success moving the football, the Red Raiders are doing a solid job getting off the field on third down and tightening up in the red zone. This is the classic “Bend but don’t break” defense. While this defense may not be at an elite level yet, they are improved.

@RPTexan asks: Through this weekend’s games, Tech has given up the fewest points in conference games and Tech has more rushes than any other team all season. In this alternate universe, should Tech’s remaining opponents just go ahead and surrender and not even show up?

Duke: In an alternate universe, Kansas would win national championships in football but unfortunately for Jayhawk fans, the only chance that would happen is if they just woke up from a dream. HOWEVER, let’s get back to reality here. Tech still must travel to Iowa State this weekend and will host Oklahoma and Texas in back to back weeks. That’s a gauntlet! Not to mention, they will play Baylor to end their year which is no cake walk either. Texas Tech still has plenty to accomplish this season, but this schedule doesn’t let up one bit.

@GTCat_EMAWdio asks: No way Beaty makes it beyond Sunday following the Kansas State game would he as a worse case scenario? I mean with Oklahoma and Texas left on the schedule at that point, wouldn’t you suspect them to get out in front of the carousel? An embarrassing loss to TCU might do it too.

Duke: I just wrote an article regarding the Kansas coaching situation. Anyone that follows me or reads my work knows that I am not the biggest David Beaty fan as a head coach. He’s a great guy but he just isn’t getting the job done in Lawrence. If it were up to me, he would have been gone yesterday. My biggest issue is if you are AD Jeff Long and you already know you won’t keep him, why wait? With the new early signing period in December, the quicker you decide the sooner you can go out and recruit. Right now, Kansas ranks 169th in the 2019 class rankings according to 247 with just ONE commit on board. What are you waiting for Jeff Long?

@perry_stan asks: Will Turpin play again this season? Why is Texas only a -2.5 favorite in Stillwater? Which Big 12 Team will go to the inaugural Cheez-It Bowl?

Duke: I’ll go in order here with my answers.

@mister_brain asks: Am I crazy for thinking that Pooka Williams on Oklahoma or Texas is probably a Heisman candidate?

Duke: Pooka is a special player for the Jayhawks. Right now, he is fifth in the Big 12 in rushing yards and is averaging around 80 yards a game on the ground. But he does so much more for this football team. Look at the all-purpose yards. He is third in the conference just behind Alex Barnes and KaVontae Turpin. There is no denying his talent and he is by far the best offensive play for Kansas. Now, if he was wearing burnt orange, I don’t think he would be a Heisman contender. However, if he was in a Sooner uniform, I would like his chances much more than at Texas. Why? Because Lincoln Riley is a freaking offensive genius. He would find more than just one way of getting the football to him in open space. The only thing that would hurt him is the fact that Oklahoma QB Kyler Murray is having an out of this world type of season. While I think Pooka would greatly benefit from being on another team in the Big 12, I don’t think I would put him at Heisman level quite yet. Give it some time and then we shall see.

@StrawnBob asks: Who is the Big 12’s Purdue?

Duke: I think there is only one obvious choice here. It’s got to be Iowa State. I don’t know much about Big Ten football, but I can see that Purdue was 3-3 before they knocked off the Buckeyes. They kicked Ohio State’s ass. Much like Purdue, Iowa State has 3 losses and just like Purdue, they can beat any team in their conference. Iowa State is a completely different team than they were a month ago. They play great defense and their offense is coming to life thanks to freshman QB Brock Purdy. There is a reason why I think the Cyclones are a top 3 team in the Big 12 and who knows, by the season’s end they could be playing for a Big 12 title if the cards fall right.

@cychas87 asks: Can Iowa State’s defense get any scarier? The last two games they made good quarterbacks look bad.

Duke: I am not going to call Oklahoma State quarterback Taylor Cornelius a “good quarterback” but what this defense did to West Virginia the other weekend was scary. They held Will Grier to 100 yards passing and only gave up one touchdown to the Mountaineer offense. Also, they sacked him 7 times in that game and absolutely dominated Dana Holgorsen’s team. Right now, this defense ranks first in the Big 12 in rush defense and number two in pass defense. You know what the numbers say? They say that Iowa State statistically has the best defense in the Big 12 and I must say, I agree with that 100%. This defense has 20 sacks in just six games and I have been blown away by the job that defensive coordinator Jon Heacock has done in Ames. Can it get scarier? I am not sure it can but if DT Ray Lima comes back this weekend against Texas Tech, watch out.