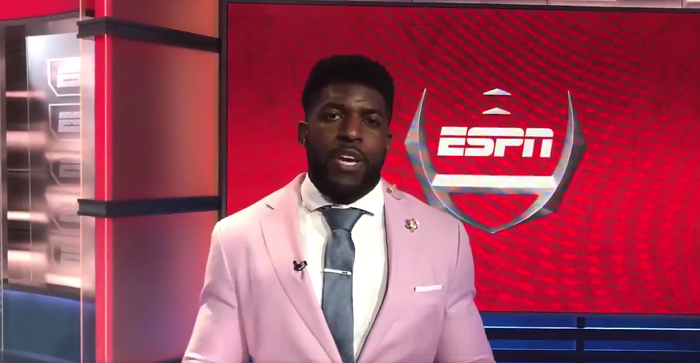 When a team sees it’s chances at reaching the College Football Playoff go up in smoke the final week of October, emotions are going to run high, and that’s what happened after the No. 6 Texas Longhorns went into Boone Pickens Stadium and lost to Oklahoma State 38-35 on Saturday night.

A storyline throughout the game was the first quarter suspension of cornerbacks Kris Boyd and Davante Davis. The two seniors were reportedly late for a meeting and as a result, Tom Herman made both sit for the opening quarter, a quarter in which Oklahoma State’s offense built its confidence and scored 17 points. They Pokes would only score 21 points the next three quarters.

One person who was very upset after the loss was ESPN analyst and former Texas Longhorn Emmanuel Acho. He said on ESPN, “I question Herman’s decision like I’m sure a lot of people did. The two players were suspended, but you hurt the whole team by benching them. Texas allowed 260 yards in the first quarter, the most Texas has allowed in a quarter in the last 15 years. You just can’t do it if you expect to win.”

He doubled down on his thoughts on Twitter as well.

There’s a reason Baker mayfield gets suspended for 2 plays against WVU last year. Or Saban doesn’t suspend Da’shawn hand for a DUI last year before FL State. A freaking DUI!!
Suspend ur veteran players if you want to, just know, it might cost u.

But there was a triple down as well, or maybe a back track. I have no idea what Acho is really getting at, but he’s still being critical of Tom Herman’s decision, but now for the “length of time” of the suspension. Acho said in a video on Twitter, “Davis and Boyd, as seniors, they cannot be late to the meeting, it’s inexcusable, there’s no place for it. Yes, they should be punished, my issue is with the punishment.” He cites the rough first quarter for the Longhorns, and then added, “when you bench those players you’re trying to make a statement or a culture shift, but in all honestly, an 18-22 year old kid is not thinking about the repercussion of his actions when he acts. When you’re in college and you sleep in and miss class, you’re not thinking about how you might miss the pop quiz, you’re thinking about how you’re tired and you don’t want to go to class. The brain is not even fully developed until you’re 25. You’re hoping to affect 18-22 year old kids, for the most part it’s something intrinsic, it’s not going to chance by them missing a quarter of the game.”

Let’s be very clear, Tom Herman did not hurt his team. The two seniors, grown men, hurt their team.

Acho then goes on to cite Charlie Strong, who kicked off a lot of players from the team, but his program went 6-7 and Strong ended up losing his job. One of the players Acho referenced was Desmond Harrison, who went to West Georgia after Texas, but he’s now the starting left tackle for the Cleveland Browns.

Acho asks, “who really suffered?” His implication is that Texas football suffered. Maybe so, but give credit to Charlie Strong, who’s decision to kick Harrison off the team may have resulted in the young man maturing, turning his life around, and now being able to play in the NFL. Strong put his own job at risk for the good of the young men he was coaching the culture of the program he was trying to change. He deserves credit for that.

Tom Herman is doing that as well. There was a lot of excuse making going on by Acho. By his logic in his third strange defense of his odd opinion, if no one’s brain is developed until 25, then why do we bother with any sort of punishment for any person until their brains are fully developed. It’s all pointless then, right? If he thinks the punishment should’ve been, say, one series instead of one quarter, why would that matter if the brain isn’t developed anyway? Boys will be boys, right? If young men can’t process wrong from right, then I guess we should just let everyone do what they want, when they want, repercussions be damned, until the golden age of 25 years old.

I gained a ton of respect for Tom Herman after he ended up sitting Boyd and Davis for a full quarter, and in full disclosure, I’m far from the biggest Herman fan. Yes, there is accountability and responsibility when you’re part of a team, and there are repercussions when you don’t listen to the rules. Comparing this to a college kid sleeping through class is ludicrous. That affects one person, you. There is no “team” there. Others are not counting on you. The repercussions in that situation are missing a quiz, hurting your grade in your class, affecting your GPA, which could affect job prospects.

I remember learning about these basic concepts like right from wrong, basic elements of “team”, one for all, all for one, when I was in elementary school, so to think an 18-22 year old can’t process that is a ridiculous cop out.

Tom Herman deserves credit for not allowing his No. 6 ranking and undefeated record in Big 12 play to affect his decision to suspension two of his best defensive players for the first quarter. If anything, there are several coaches around the country who could learn a thing or two from what Herman did on Saturday night. If they were to listen to Acho, the enabling of young people would only continue.

Tempers Flare, Oklahoma State Upends Big 12 with Upset of Texas
Big 12 Week 9: The Good, the Bad and the Ugly
To Top