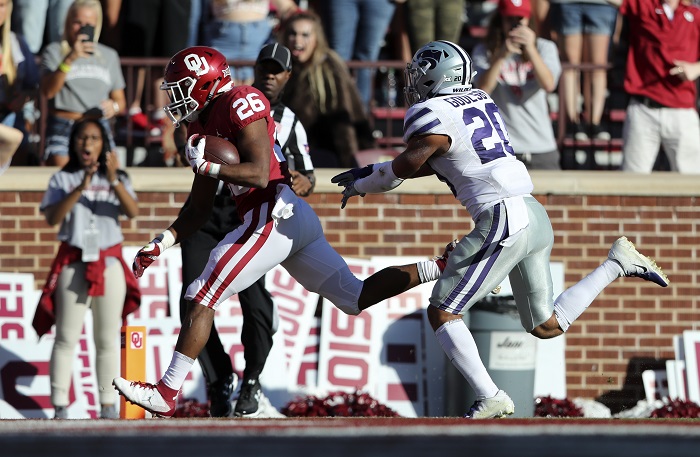 OU had six offensive drives in the first half and put points on the scoreboard on each one. The party started on the very first drive when quarterback Kyler Murray found tight end Grant Calcaterra for a 35-yard score. Then after forcing Kansas State to a quick three and out, the Sooners were able to knock in a field goal on their next drive. Soon the flood gates started to open when Kyler Murray found wide out CeeDee Lamb for an 82-yard touchdown giving the Sooners a 17-0 lead at the end of the first quarter.

But the Wildcats were able to respond, albeit briefly. Thanks to a fourteen-play drive that went 75 yards and took 6:32 off the clock, Kansas State did cut the lead to 10 points. But any drama in the game ended shortly thereafter. The Sooners added two more touchdowns due to runs by Kyler Murray and Kennedy Brooks. Right before the half ended, Kansas State kick returner Isaiah Zuber fumbled a kickoff and the Sooners were able to make the Wildcats pay for it by adding a late field goal. It wasn’t a pretty sight as the first half ended with the Sooners leading 34-7.

As the final score indicated, the game kept going south for Kansas State as they went three and out on their very first drive of the second half. The Sooners, once again, wasted no time finding the end zone as running back Kennedy Brooks darted for an 82-yard touchdown run down the sideline. While Kansas State kept punting the football away, the Sooners kept chewing the clock with backups starting midway through the third quarter. The Wildcats were able to score one touchdown in the second half when running back Justin Silmon scored on a 9-yard touchdown run, but that was all the scoring for the Wildcats in the final 30 minutes.

When the final whistle blew, the Sooners had racked up 322 rushing yards and quarterback Kyler Murray continued his dominance going 19/24 for 352 yards and had 4 total touchdowns. Also, Oklahoma wide receiver CeeDee Lamb had a field day catching just 4 passes but racking up 160 receiving yards and 2 scores. Overall, Kansas State could never find any sort of rhythm offensively and when your defense gives up 702 yards, your chances of winning on the road are slim to none. I can’t remember the last time Kansas State looked this bad all around, and FOX Sports analyst Joel Klatt pointed out as much during the broadcast.

Kansas State’s performance, or lack thereof, was inexcusable, and the score of 51-14 told the entire story for this game. Oklahoma dominated this game and give credit to head coach Lincoln Riley and interim defensive coordinator Ruffin McNeill for getting this team ready to play. Riley, in his typical humble fashion, said afte the game, “Our team played a really complete game and made some improvements from the last week… we put a few things in front of them this week that we really felt that we needed to do to against Kansas State and take the steps we needed to as a team.”

That’s one way to put it.

With the win, the Sooners move to 7-1 on the season as their hopes of reaching a Big 12 title game remain very much intact. As for the Wildcats, they drop to 3-5 and will need to win three of their next four games just to reach a bowl.