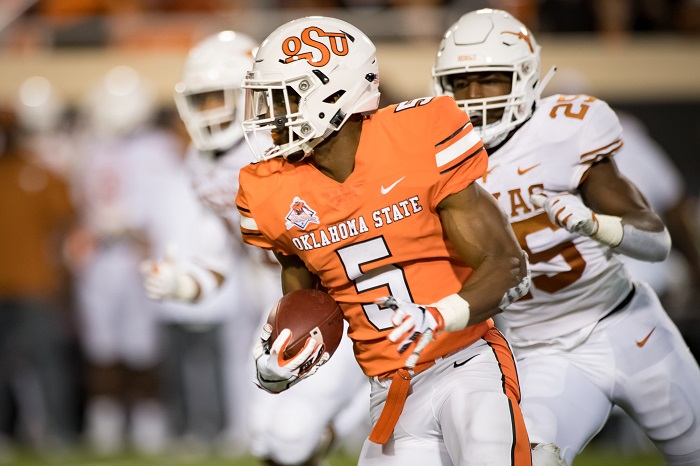 No. 6 Texas entered Stillwater for Homecoming Weekend and the Oklahoma State Cowboys capped off the weekend in the best way possible, a 38-35 win. The victory adds even more chaos, confusion and options to the Big 12 Conference as we get prepared to turn the calendar to November.

The Cowboys got the scoring started on the fourth play of the game when Taylor Cornelius hit Tylan Wallce for a 40-yard touchdown. Texas answered with a touchdown of its own, as Sam Ehlinger, back from injury, ran the ball in from five yards out, and the extra point tied the game at seven. But Oklahoma State responded with a nine-play, 75-yard drive and the Cowboys went up 14-7 and never looked back.

Sure there was a scare in the second half, when Texas scored 14-unanswered points and trailed 31-28 in the fourth quarter, but Mike Gundy relied on his most criticized player so far this season, quarterback Taylor Cornelius, to seal the win. On third and goal from the ten with under six minutes left and the Pokes up three, the Cowboys ran Cornelius around the right edge where he barely got into the corner of the end zone. Then, after Texas scored, Oklahoma State clinched the victory thanks to Cornelius’ eight-yard scamper on third and six.

What followed should have been a kneel down or two and a friendly hand shake or two. Alas, a heated and emotional night was not meant to end like that. Cornelius went for a kneel down, but Breckyn Hager had another idea, as the Texas defensive end got chippy in the backfield, which caused tempers to flare. That caused Mike Gundy to run out on the field to try and make sure his guys didn’t get into a fight, and then on the other sideline, Tom Herman saw the ruckus and ran onto the field and started yelling at Mike Gundy. In the end, it was all smoke and mirrors as Oklahoma State won the game and sent the Big 12 into a bit of upheaval, as there is now a three-way tie atop the conference standings between Texas, Oklahoma and West Virginia, all 4-1 in conference play.

As the final seconds ticked off, Gundy and Herman did have a long embrace to clear the air, and Gundy told ABC after the win, “When I went out, I was concerned about a fight. I was trying to get my guys back, he [Herman] thought I was trying to get in it, so it’s just competitiveness you know. I told him I don’t want him to think that and he said the same thing. So I didn’t want it to get ugly. It’s all good.”

But more importantly, Gundy denied being surprised by how well his guys played on Saturday night, saying, “We’ve had two really good weeks of practice. We’ve got a lot of quality young men on our team. Our coaches did a really good job ignoring the outside… but we were able to reach down and make a play.”

Cornelius had himself a flawless night, just as the noise, which Gundy referred to, reached a fever pitch over the past two weeks followed the loss to Kansas State. But his performance against the Longhorns will make fans say, “Spencer Who?” or “Dru Who?”

The senior finished 23 of 34 for 321 yards and three passing touchdowns, plus 12 rushing yards for 23 yards with two rushing touchdowns.

Tylan Wallace had a breakout performance the nation deserved to see, with 10 catches for 222 yards and two touchdowns. If he wasn’t on the radar of folks outside the Big 12, he is now.

Suddenly, after suffering three losses in the previous four games, Oklahoma State’s season feels like it has life again. The Cowboys play three of their final four games on the road, but two are very winnable against Baylor and TCU.

As for the Longhorns, the first quarter suspensions of Davante Davis and Kris Boyd clearly played a role in the outcome. Oklahoma State got off to a hot start passing as Texas had its issues in the secondary, and then Boyd struggled the rest of the night against Wallace. Both players let down themselves and their teammates.

The College Football Playoff is likely a distant memory for Texas, but the Longhorns can still win the Big 12. However this weekend’s match up against West Virginia could very well be an elimination game for the Big 12 title.