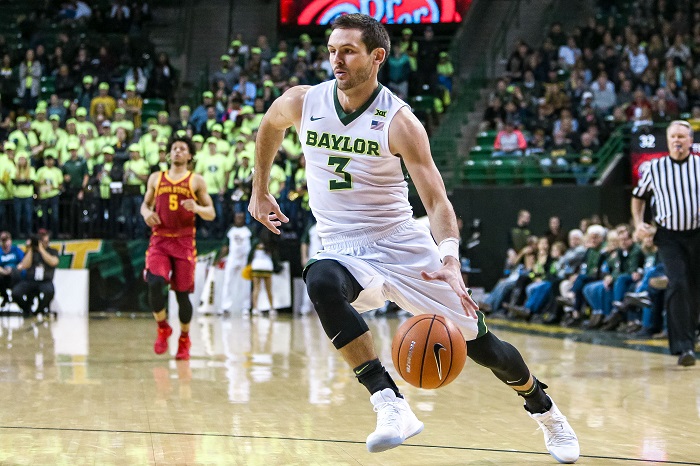 Leading up to the opening of the Big 12 season in Heartland College Sports will analyze each of the Big 12 men’s basketball teams. Today it’s the Baylor Bears.

Looking ahead to 2018-19: Baylor lost its Top 4 scorers from last year’s team, which comes to about 52 points per game. That will be difficult to replace. Plus, the Bears only return three lettermen from a year ago, the lowest of any Power 5 program. The core of their veteran returnees would be described as role players a year ago. Clark, Lindsey, McClure and Vital all filled solid roles for the Bears, but which of these high-effort players takes the next step in 2018-19? My bet is on Vital, who worked between the starting lineup and the bench last season. By the way, Lindsey was rehabbing an injury during October workouts. Take those four core players and combine them with the three eligible transfers — Kegler, Gillespie and Mason — and you have a good seven-player rotation, but not a great one. Kegler averaged nearly 10 points per game in his one season at Mississippi State, while Gillespie averaged 10 points per game at a Division III school. Drew is high on Gillespie, saying he has a “Big 12 body.” Mason, meanwhile, lit up the Bears for 31 points in the NCAA Tournament three seasons ago and the Bears actively recruited him when the graduate transfer was looking for a new program. But Mason has missed two years due to injuries and his potential impact is unknown. The Bears will sorely miss Acuil’s length inside and Lecomte’s ability to score and pass. Drew believes the Bears are in better shape to compensate for the loss of Acuil than the loss of LeComte. Freshman recruit Flo Thamba is the only player on the roster that can duplicate Acuil’s length inside, but he’s likely to need development. It’s unclear if any of the guards on this roster can fill Lecomte’s role this season. Player development is big at Baylor, and how this young group develops is going to define the season (Drew called this season a “teaching year” at Media Days). If it grows in a way where it can take the place of Baylor’s departing seniors, then Baylor will be competitive. If this group struggles to improve, Baylor may find itself struggling just to get back to the NIT. Additionally, with 16 players on the roster, but two expected to sit due to transfer rules, it will be interesting to see how Drew uses his redshirts with his recruiting class.

Media Day quote: “Well, the reason we’re in this predicament, you had some guys leave early and some guys transfer and that’s common with everybody in college basketball. With us it hit is more this year than in any other year we’ve had.” — Baylor head coach Scott Drew.