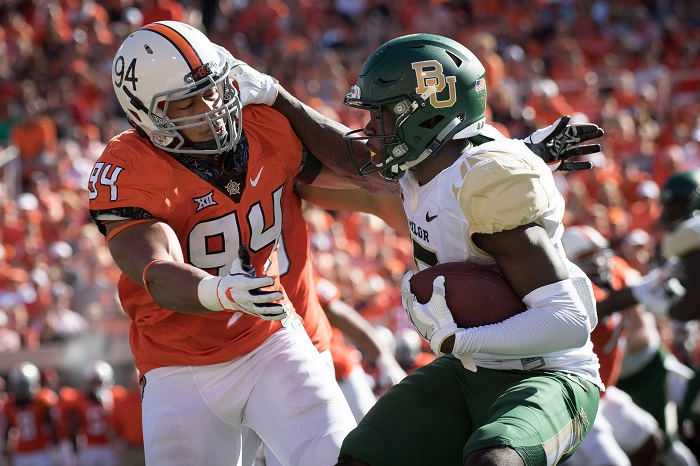 Here is everything you need to know about the upcoming Big 12 rematch in our Baylor vs. Oklahoma State preview and prediction.

Justice Hill is still Batman in Stillwater but against Texas last week Hubbard became Robin.  Oklahoma State used Hill and Hubbard a lot in the backfield together and it worked wonderfully.  Hubbard only got 10 touches to Hill’s 26 but he gained 80 yards on his nine rushes. His speed has to be respected and his presence in the backfield along will Hill creates matchup problems and spreads the defense thin.  Add in that he’s a reliable outlet receiver for when the protection breaks down and I expect him to see the field a lot for the rest of the season.

A lot of OSU’s offensive struggles this season have been blamed on quarterback Taylor Cornelius but in reality most of the issues have been caused by poor offensive line performances,  When it comes to technique and just doing what they are supposed to do the line has been decent they just lack the talent and depth to really compete at a high level. That has made things hard for Cornelius, not really giving him time to go through his reads. It’s also limited the effectiveness of the run game which boasts one of the best running backs in the nation in Justice Hill.  Against Texas last week the Pokes’ blockers played their best game of the season which allowed Oklahoma State to have the kind of success fans are used to seeing, especially in the first half where they ran up 31 points and almost 400 yards. More of those kinds of performances are needed to give them a chance in the last quarter of the season starting this week against a well coached Baylor team.

The Tennessee running back transfer turned wide receiver has worked out well both for Hurd and for the Bears.  He’s taken well the his new role and leads the team in catches (50) and yards (660), but he is also a first down machine currently ranked 6th in the nation in both first down receptions (39) and catches of 10+ yards (35).  His ability to find the sticks and move the chains will be invaluable against a Cowboys team that wants to bring pressure and force quick throws.

After being the starter all year and playing well Brewer was replaced in the blowout loss to West Virginia after going 1-8 for only 22 yards and three interceptions.  Matt Rhule said that Brewer “looked at little out of it” and he is in concussion protocol so its uncertain if he’ll be able to play this weekend. Whichever quarterback plays they need to play sharp and make quick and more importantly correct decisions.  After a mid season slump the Cowboys run defense showed it fangs again against Texas but that comes at the expense of pass coverage. With linebackers and safeties crashing the line of scrimmage there are always quick passes to be had (hello, Jalen Hurd!) and the corners are often left one-on-one against the outside receivers.  Against quality opponents the Cowboys have played only two good games defensively (Boise State, Texas for a half) while the others (Iowa State, Texas Tech, Kansas State) have pushed them around. if Baylor has success early and the doubt creeps in the OSU defensive Rhule’s squad could run up and down the field.

The same storyline applies to both teams this week:  which team shows up?

Both teams have done a Jekyll and Hyde routine the last two games playing well one of their games and getting embarrassed the other.  The good games are very similar with Baylor nearly beating Texas in Austin and Oklahoma State wrangling the Longhorns in Stillwater although narrowly. The losses aren’t as equal with the Bears getting thumped by a West Virginia team that’s one of the best in the conference while the Cowboys were pounded by Kansas State, one of the worst. Which versions of each team comes to play?  The ones that stood up against mighty Texas or the ones that’s looked lost against WVU and KSU?

I had a good feeling about Oklahoma State against Texas but I ignored it and picked UT to win because all signs pointed to it.  This week I have a bad feeling about OSU against Baylor and I’m sticking with it. There all all kinds of factors going against the Pokes.  After playing so well against Boise State they got absolutely embarrassed the next week versus Texas Tech. Following an emotional win against a top 10 team and going up against a Baylor team that has lost it’s last two contests I’m worried about them being focused.  Add in that Bedlam against the hated Sooners looms next week and this is a classic trap game. Matt Rhule will have Baylor fired up after the debacle in Morgantown and with an extra two days of rest the will be ready to go. I have a feeling their will be a Texas hangover on the other sideline and the Cowboys will fall behind early before getting it together but won’t have time to recover.