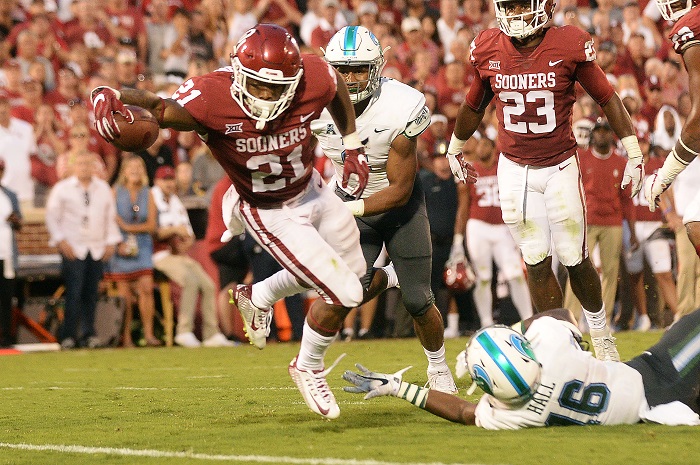 The Sooners depth in the backfield took another hit on Thursday. Heartland College Sports has exclusively learned that running back Marcelias Sutton suffered a leg fracture in a freak accident in practice.

Sutton has 29 carries this season for 152 yards and two touchdowns. He’s primarily played a back up role to Trey Sermon and Kennedy Brooks, along with Rodney Anderson. But with Anderson also out for the season, this leaves the Sooners with just three scholarship running backs in Trey Sermon, Kennedy Brooks and T.J. Pledger, none of whom are upperclassmen.

Sutton came to OU as part of the Class of 2017 and was the No. 2 ranked JUCO running back in the country and was a four-star recruit by ESPN. He was an honorable mention NJCAA All-American in 2016 as a sophomore, rushing for 907 yards on 130 carries. Last season he played in 13 games with 22 carries for 130 yards and two touchdowns.

OU is coming off a dominant win over Kansas State last week and now hits the road to face Kliff Kingsbury and the Texas Tech Red Raiders in Lubbock on Saturday night.

Texas Head Coach Tom Herman should be thanking his lucky stars tonight. What we witnessed in Lubbock between Texas and Texas Tech...

With just over one minute left in the game and Oklahoma State trying to seal the win for the Cowboys over the...