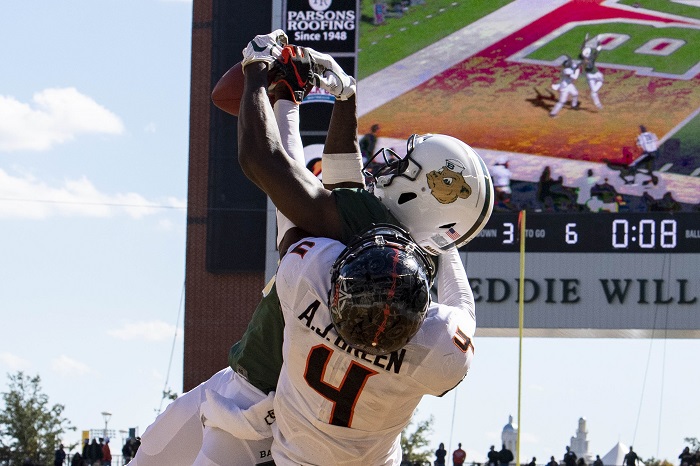 If there was a game to define the Big 12 this season, the game in Waco between Baylor and Oklahoma State was it. After getting demolished last week against West Virginia, I wasn’t sure how Baylor would respond. Meanwhile, Oklahoma State came into this game riding high after their big prime time win against Texas. On homecoming day in Waco, there was plenty to talk about on and off the field.

Even with Jalan McClendon getting the start today at quarterback for Baylor, the Bears marched right down the field on their first drive but came away empty handed because Oklahoma State cornerback Rodarius Williams picked of McClendon in the end zone. The Cowboys were able to capitalize off the turnover as quarterback Taylor Cornelius capped off an eleven-play drive with a 6-yard touchdown run. But once again for Baylor, it was déjà vu because they marched down the field and came away with nothing thanks to a missed 26-yard field goal by Connor Martin.

After a few punts and an OSU missed kick, Baylor finally broke through offensively thanks to some costly penalties by the Cowboys defense. Baylor would pull to within three, but soon enough the Bears would come up with a huge blocked punt deep into Cowboy territory and turned it into a touchdown by Trestan Ebner. Suddenly, Baylor went into the break leading 14-10.

At halftime, whatever adjustments were made clearly benefited the offenses. In the second half, this game turned into a true Big 12 slugfest. Oklahoma State scored twice in a span of about four minutes, with another Taylor Cornelius short run and a Cornelius pass to Tylan Wallace from eight yards out. When it looked like the Pokes might pull away, Baylor running back John Lovett quickly answered with a 75-yard touchdown run down the sideline.

It then appeared that Oklahoma State would try and slow the game down a bit. They ran the ball successfully on their last scoring drive of the game as running back Justice Hill capped of the long drive with a touchdown. However, Baylor had a trick up its sleeve all along as they brought in quarterback Charlie Brewer, who was cleared to play after passing concussion protocol and led his offense down the field to answer right back.

With about six minutes left in the game, Oklahoma State was up 31-28 and found themselves with a fourth and two on the Baylor 36-yard line with 1:37 left to play. With the kicking game not working due to the crazy wind in Waco, the Pokes had no choice but to go for it, but it came back to bite them in the rear as Chris Miller sacked Taylor Cornelius to give Baylor a final chance to tie or win the game. Baylor chose the latter, as Charlie Brewer hit Denzel Mims for a touchdown pass with just 7 ticks left on the clock and the Bears pulled of a huge homecoming win 35-31 over the Cowboys.

Baylor moves to 5-4 on the year and will face Iowa State next weekend in Ames. Meanwhile, the Cowboys will drop to 5-4 and will take on their in-state rival, Oklahoma, in Norman on Saturday.