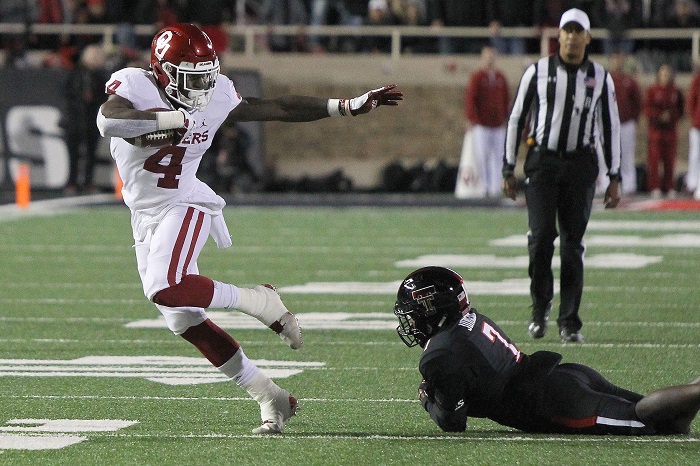 Here’s what you need to know. This game was in Lubbock … at night. Texas Tech players and fans wore black. That alone should let you know that weird things are going to happen, and boy they sure did. With a sold-out crowd of 60,000+ on hand, this game had shootout written all over it. While it wasn’t as entertaining as the 2016 match up between Patrick Mahomes and Baker Mayfield, this game stood tall in its own right. Oklahoma entered the game trying to not only keep their Big 12 title hopes alive, but their playoff hopes as well. The same went for Texas Tech, of course, minus the playoff part.

This game had a very odd begging to it but again, Lubbock at night, so I guess it’s normal under those circumstances. Tech went three and out to start the game, but luckily, Oklahoma quarterback Kyler Murray threw a pick right to Vaughnte Dorsey who took it all the way to the Oklahoma four-yard line. The Red Raiders were able to capitalize off the great field position thanks a six-yard touchdown pass from Alan Bowman to T.J. Vasher. Then the unthinkable happened when, once again, Kyler Murray threw another pick to guess who? None other than Vaughnte Dorsey who returned it deep into Oklahoma territory. Tech turned it into another touchdown when Bowman found running back Ta’Zhawn Henry for the score and suddenly, Tech took an early 14-0 lead.

Then, the wild west shootout began as both teams would combine for seven scoring drives on eight possessions. Kyler Murray was able to find Lee Morris and Carson Meyers for touchdown passes as well as adding one a score on the ground along with running back Trey Sermon. Oklahoma scored touchdowns on four straight possessions, but it still wasn’t enough because Texas Tech led 31-28 at the end of the first half. During that scoring stretch, Texas Tech running back Da’Leon Ward was the go-to option as he scored not only running the football, but catching it as well after taking an Alan Bowman pass 45-yards to the house on a screen play.

The big news coming out of the half was that quarterback Alan Bowman was injured on a second and goal play where he scrambled towards the corner of the end zone with around a minute left in the first half. After the game, I was able to see the hit and it looked like he took a shot right in his midsection and coming off a partially collapsed lung, I knew it wasn’t good. There was a rumor that he was hit in the head with a football wearing no helmet and that was what I and many others were hearing but that turned out to not be true. Alan Bowman was checked back into a hospital late Saturday night/early Sunday morning for further treatment.

With that news, quarterback Jett Duffey was the option at quarterback for Texas Tech and through his first three drives, he went three and out. This is where the Red Raider defense stepped up as they held the high-powered Oklahoma offense to just seven points, which came on a 45-yard touchdown pass from Kyler Murray to Lee Morris. But, much like the second quarter, there was plenty of scoring before the game ended.

Texas Tech kicker Clayton Hatfield was able to knock in a field goal to bring the Red Raiders within one (35-34) but Oklahoma roared right back with a 20-yard Trey Sermon touchdown run to extend their lead 42-34 with twelve minutes left in the game. But somehow, out of nowhere, Jett Duffey was able to put together a twelve-play drive that resulted in a touchdown pass to Zach Austin. Now down two, Kliff decided to go for two there and on a trick play, Seth Collin’s pass was picked off by Robert Barnes who took it the other way for a long two points. It was a four-point swing as the Sooners now had a 44-40 lead.

With the way Oklahoma was running the football, you had to know that they were going to chew some clock and they did that by stringing a seven-play drive that took over four minutes. The drive ended thanks to another Trey Sermon touchdown run, this time from 30-yards out to give Oklahoma an eleven-point lead. Tech was able to score once again but with it being a two-possession game, they had to kick an onside kick and it didn’t work. The Sooners were then able to run out the clock and go on to win 51-46.

Without even looking at the box score, I knew Oklahoma had some serious rushing numbers but when I saw them after the game, I was really impressed as the Sooners racked up 323 yards on the ground which now makes three straight games where the Sooners have rushed for over 300 yards. Trey Sermon led the way with 206 yards and three scores while Kyler Murray added 100 and a touchdown as well.

For Tech, this offense just wasn’t the same without Alan Bowman in the second half because in that first half, the offense was red hot without any lulls. One guy I do want to mention is Tech wide out Antoine Wesley who continues to be a stud and caught 12 passes for 199 yards. He was their guy all night in the passing, game.

With the win, Oklahoma moves to 8-1 and remain in the driver’s seat in the Big 12. It also keeps OU’s playoff hopes alive for another week. Meanwhile, Texas Tech will fall to 5-4 and with host Texas next week for senior night.

TCU Keeps Bowl Hopes Alive With Win Over Kansas State
A Big 12 Fan Takes on Austin, DKR and the Game of the Year in the Conference
To Top