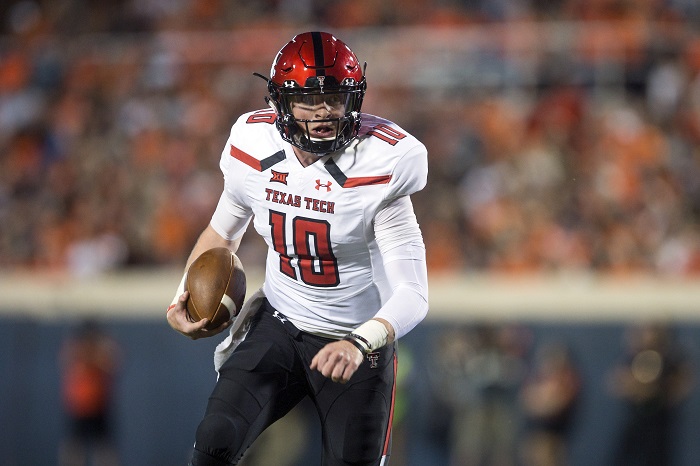 The Texas Tech Red Raiders had themselves a tough night on Saturday. They went toe-to-toe with the Oklahoma Sooners during the “Black Out” in Lubbock, but were unable to do enough to stop Kyler Murray and the Oklahoma Sooners, losing 51-46 and falling to 5-4 on the season.

Quarterback Alan Bowman didn’t play at all during the second half and it was unclear what he injured. Jett Duffey was serviceable in relief, completing 9 of 17 passes for 139 yards and two passing touchdowns, along with 13 carries for 47 yards and one score. But Bowman’s steadiness in the pocket was clearly missed.

Bowman took a big hit in the first half near the goal line, but that was not the reason the telecast or media was given for why he missed the second half.

So it has been confirmed that Alan Bowman was hit with a football without his helmet on which caused the injury. Probably the strangest injury I have ever heard at a football game.

The news got worse early Sunday morning when Bruce Feldman reported that Bowman was being transferred back to the hospital to have the collapsed lung that he suffered against West Virginia be reevaluated.

#TexasTech QB Alan Bowman has been transported to Covenant Medical Center to be evaluated for a reoccurrence of his previous injury (partially collapsed lung) that occurred in the #WVU game. He will be held overnight for observation.

We’ll keep tabs on this, but any time an injury as serious as a collapsed lung has to be reevaluated for the second time in a few weeks, it’s clearly a concern. With Bowman back in the hospital as of Sunday, the likelihood of him taking the field next week is in doubt. The Red Raiders cap off a tough three-game stretch in Week 11 against the Texas Lognhorns in Lubbock.