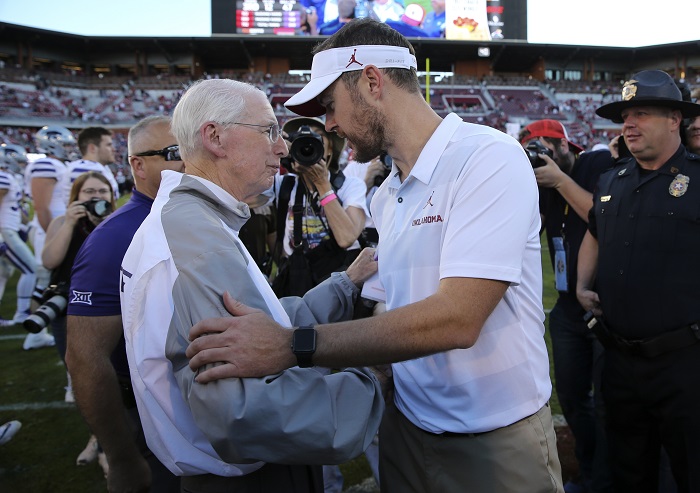 Around Dallas, on occasion, we get earthquakes that have nothing to do with whether the Dallas Cowboys win or lose. They’re not fault lines. They’re fracking.

But the earthquakes these days feel like they’re coming from the Big 12 offices in Irving, Texas, as the league prepares for what could be one of the most seismic coaching shifts in recent memory. All the signs are there. Not that all will come to pass. Some are familiar. Some could be painful. But it all starts in Lawrence, Kansas.

Yeah, sure, because that’s where all football talk starts in this conference, right?

The Kansas job is open, of course. We know that. Athletic director Jeff Long has already fired David Beaty. Hey, look, I think I speak for everyone here at HeartlandCollegeSports.com when I say that we all like Beaty. His relentless optimism in the face of one of college football’s hardest jobs was admirable. But the Jayhawks aren’t much better than when he started, the program is recruiting at an FCS level right now and Long has bills to pay (and he needs donors to pay them. That stadium renovation isn’t going to pay for itself).

Long doesn’t look like he’s playing around, either. Les Miles has reportedly talked with Kansas. So has former Arizona State boss Todd Graham. Long looks like he’s waiting to see what other potential head coaches hit the market later this month. Long’s last hire at Arkansas was Bret Bielema. The hire before that was … oh, that Bobby Petrino guy. OK, so maybe that’s not an option. But Long’s history shows he’s not looking for the next young buck. He’s looking for an experienced hand who doesn’t mind managing a rebuild. It doesn’t mean it’ll work. But I think that’s what he’s looking for.

There’s experience, and then there’s EXPERIENCE. Not that his “all caps” experience is doing Bill Snyder many favors at Kansas State right now.

By overall tenure, no Big 12 coach has more time on the job than Snyder. He’s a Hall of Fame coach. He’s a legend. He did what couldn’t be done in Manhattan, Kansas. And now he may be in serious trouble.

A former contributor, Xander Schneider, wrote about what could be the end of the Snyder era on Tuesday. I saw the Wildcats in person against Texas in September, at home, and I was kind of stunned at the low level of play on offense. The defense proved solid, but the play of this team has declined this season. Schneider pointed out the recruiting is at a low point right now (ninth out of 10 teams in the Big 12 per 247sports.com). And, thanks to reporting at GoPowercat.com, there’s a growing sense that Snyder’s playing with different sets of rules for things as trivial as bowl championship rings.

Nothing feels right at Kansas State right now. Snyder is 78 and legends almost never get to tailor their own exit. Snyder signed a long extension before the season, but that can easily be converted in something like a personal services contract because no one wants to see Snyder leave Manhattan. No one wants it to get ugly, either. But it could quickly. And I’m almost certain no one wants to see Sean Snyder, his son, become the head coach. But elevating him to the lead job, in the short term, might be the price K-State has to pay to keep the peace. Because the elder Snyder has leverage. That leverage is Ron Prince. When Bill Snyder retired the first time Prince took over and lasted three seasons, went 17-20 and was fired. Who rescued the Wildcats?

But at least the folks in Manhattan know that the end is coming at some point, even if it isn’t after this season. The folks in Norman, Oklahoma may have to prepare for the idea that a new beginning is on the horizon.

Those aforementioned Cowboys, reportedly, have OU head coach Lincoln Riley on their shopping list (CBSSports.com called it an “affinity”), should owner and general manager Jerry Jones decide to fire Jason Garrett. That report came out on Sunday. On Tuesday Jones did his usual radio show (yes, the team owner has a radio show because, well, Jerry’s gonna Jerry) and said of the Riley rumors, “That would be total drawing it out of the air. … Totally speculation,” according to the Dallas Morning News’ Jon Machota.

Now, the Cowboys have to fire Garrett first, and the Cowboys can’t decide if they want to be good or not. With every win, the case to keep Garrett gets stronger. If you want a new coach in Dallas, you’re hoping for the Cowboys to fall off the cliff. If you’re a Sooners fan, you’re hoping the Cowboys suddenly figure it out. Because, well, it’s Jerry and no one buys anything he says around here.

Of course, that implies the Cowboys are the Sooners’ biggest problem in keeping Riley. It’s not. The biggest problem is the Cleveland Browns. The Browns already have an open position at head coach and offensive coordinator because the team fired both a week ago. And they have something the Cowboys don’t — Baker Mayfield. The synergy is magical. Reunite Mayfield with the coach that made him a Heisman winner? The Dawg Pound will be all over that. As much money as OU has in the coffers, the Browns can still money whip the Sooners because Cleveland doesn’t need a board of trustees to approve the deal.

Who knows if Riley has NFL aspirations. He’d be wise to keep his mouth shut about the potential during the season. The Sooners are still in the hunt for the Big 12 title and a College Football Playoff berth. I would imagine the Riley-to-Cleveland talk would kick into overdrive after that.

But at least the Sooners have the ammunition and reputation to go find a top-flight head coach that could smooth any transition (after all, isn’t Bob Stoops still around?). Imagine the trouble Iowa State would be in if it were to lose Matt Campbell?

With each passing season Campbell’s reputation grows. He has the Cyclones bowl-eligible for the second straight year. The Cyclones are still in the hunt for the Big 12 title game. He’s improved recruiting. He’s improved reputation. Programs sniffed around Campbell last offseason before ISU gave him a fat extension. You can be certain other programs will do it again in December, especially if he navigates the Cyclones to Arlington, Texas, on Dec. 1.

Campbell has executed a big-time turnaround job and you’d be foolish not to notice. Las Vegas bookmaker Bovada has Campbell with the sixth-best odds to get the Louisville job. I would consider that to be a lateral move for Campbell and not worth his time. But jobs with better potential could come along this offseason. Jobs that offer more money and more resources. Will he be tempted? It’s hard to say. In my opinion, there is one job Campbell truly wants — Ohio State. I base that on Campbell being an Ohio native and him spending most of his coaching career at jobs in Ohio (Mount Union and Toledo) before venturing to Ames, Iowa. Urban Meyer seems unmovable, but this has been a crazy season at OSU this season (and you know why). If Meyer ever leaves, consider Campbell gone if the Buckeyes want him.

But any other job? It’s hard to tell if Campbell has a wish list. When he was hired at ISU he said he wanted to be there. Taking the extension instead of a job at, say, Tennessee, last offseason validated that. Campbell is a straight shooter. But we all have ambition. The day he leaves Ames is the day ISU is dreading because who knows if the Cyclones can attract another coach like Campbell?

If there is an exit for Campbell, it’s sure to come with little drama. He doesn’t seem the type. If you want drama, drive a few hours down the road to Stillwater, Oklahoma.

Mike Gundy shouldn’t be job-shopping. He has the cush gig to end all cush gigs. He’s an Oklahoma State alum. He’s done more with that job than anyone had a right to expect when he took over for the 2005 season. I mean, six 10-win seasons? An Iowa State loss away from a probable Bowl Championship Series title game berth? He should have lifetime immunity because homecomings almost never go this well.

The luxury of being successful means that you don’t have to go job-hunting. The jobs hunt you. And Tennessee hunted Coach Mullet pretty hard last year before Gundy opted to stay in Stillwater. I’d like to stay that’s the exception. But it’s not the first time Gundy has been the focus of a job search and opted to stay with the Cowboys. It’s happened more than once. And those thwarted searches almost always come attached with more money to stay with OSU.

Such as last December when Gundy’s flirtation with Tennessee was rewarded with an addendum to the extension he signed early in 2017 that allowed him to make $5 million in 2018. Funny how that works. He’s like that guy you know at work that knows just when to entertain a job offer to leverage his current employer to give him more money.

But, at some point, that gets old. And I’m not saying that happens after this season, even though he’s getting pranked by radio show hosts and ranting about snowflakes. But Gundy is attractive to other programs because he’s built something unprecedented at Oklahoma State and his marketing acumen in terms of running his program is unmatched in the Big 12. I mean they don’t call his hair the “Million Dollar Mullet” for nothing.

Dang it. I think I just found the next head coach of the Dallas Cowboys.

Any way you look at it, this offseason is going to be very interesting.

The Bill Snyder Era: Ready or Not, the End is Near
Big 12 Mailbag Part 2: Conference Race, Iowa State vs. Texas, and Matt Rhule Cop Out?
To Top