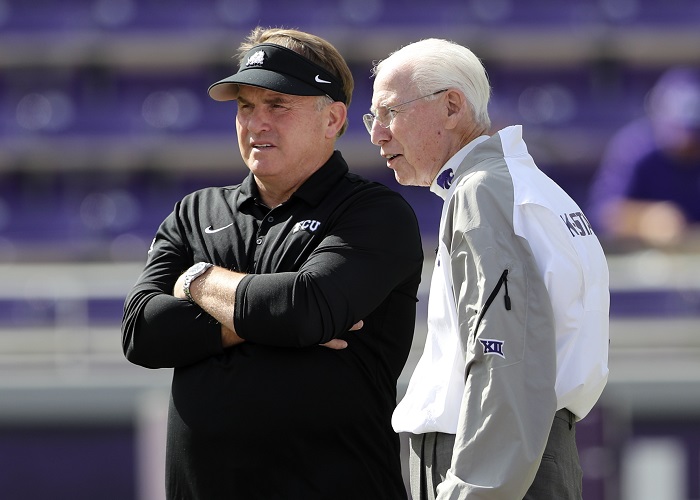 As we gear up for Week 12 of the college football season (where is this season going?!), the Big 12 has come down to four teams: Oklahoma, West Virginia, Iowa State and Texas. Saturday is a huge day with two of these teams meeting (Texas, Iowa State). But there will be other implications around the rest of the conference. So here are the top five storylines I’m watching in the Big 12 Conference heading into Week 12.

1. Bowl Eligibility in Baylor vs. TCU

If Baylor wins, the Bears will be bowl eligible one season after winning just one game. That would be a huge step for Matt Rhule’s program and would give his young players another three weeks of practice, which would be invaluable for 2019. Meantime, Gary Patterson needs his Horned Frogs to win their final two games to get back to bowl eligibility. If they lose, it will be TCU’s first season since 2013 that they are not bowl eligible, and just the third time under Coach P. This game has also turned into one of the best rivalries in the Big 12 Conference, as these two teams genuinely despise each other.

We don’t know if this is it, but Saturday against Texas Tech could be Snyder’s final home game roaming the sidelines as the head coach of the Wildcats. There is plenty of speculation surrounding it. If so, it will wrap up one of the greatest coaching careers in college football history. It’s sad it’s ending this way with Kansas State struggling (it should’ve ended 3-5 years ago), but Snyder still needs to be respected and appreciated, because without him, there may be no Kansas State football. If this is it for Snyder, I highly recommend this article from our friend Tim Fitzgerald of GoPowerCat. It does a great job realizing and explaining why it’s time, but also how we can forever be grateful for what Coach Snyder has accomplished.

Reports began surfacing on Friday afternoon that Les Miles will be the next head coach of the Kansas Jayhawks. This comes days after Kansas tried to send David Beaty off on a high note with one more win in his KU career, but came up short against Kansas State. Now the Jayhawks end the season with Oklahoma and Texas. We all know what happened two years ago when KU met UT, but let’s be honest, their odds of winning either game are not good. So, what is left in the tank? There are a lot of prideful seniors on this team, however there is also a lot of noise around the program right now that can be distracting.

4. Can Oklahoma State do it again?

The Cowboys pulled off a huge upset over No. 6 Texas a few weeks ago on Homecoming Weekend to change the Big 12 landscape. They almost did the same last week against the Sooners. Could they do that again by beating West Virginia this weekend? The Mountaineers should not be caught looking ahead to the Sooners, but you never know. It seems like just when Dana Holgorsen starts turning us all into believers again, he lets us down in a big way. Here’s to hoping that is not the case on Saturday and it sets up a fascinating Black Friday with Oklahoma taking on West Virginia. Oklahoma State has been a tough team to figure out this season, but I’m never counting out Mike Gundy in a spot like this.

The loser can’t make the Big 12 Championship Game. The winner still has a shot. It’s the biggest game in the weekend, by far, and unfortunately, it’s only going to air on Longhorn Network. But the implications of this game are enormous. Since Texas is home and has lost a couple games over the past few weeks, the pressure clearly resides in Austin. Iowa State was 1-3 to start this season and Cyclones fans would have never believed you if you told them that they’d be preparing for the Texas game in Week 12 with a real chance of reaching the Big 12 Championship Game in a couple of weeks. But if you told Texas fans heading into the Oklahoma State game they’d be knocked out of the Big 12 race by Week 12, they’d have thought something went drastically wrong.

Kansas State vs. Texas Tech: Preview and Prediction
Behind Third-String QB, TCU Pulls Off ‘Gutsy’ Win Over Baylor
To Top