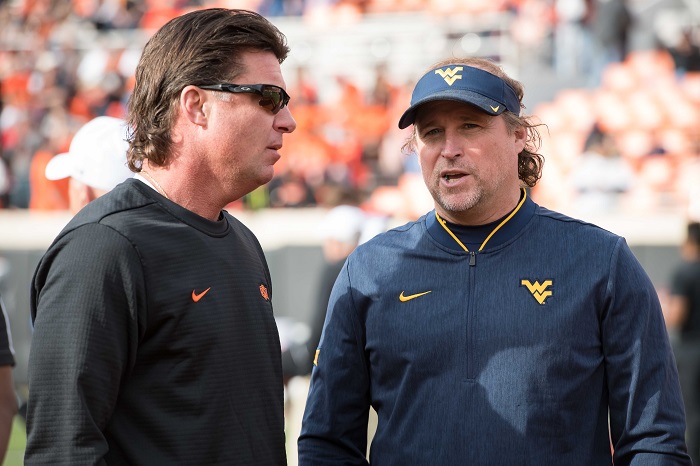 The Sooners find themselves in a position to win the Big 12 Conference and just maybe reach the College Football Playoff. However an undefeated Notre Dame puts a wrench into these plans, along with OU’s horrible defense. The Sooners allowed KU to rack up 524 total yards when no other team in the Big 12 had allowed the Jayhawks to total more than 368 yards. OU’s defense remains a massive liability and the committee with punish them for that side of the ball. If the Sooners’ defense can play respestfully and help the team win the next two games against West Virginia and (likely) Texas, then they might have a shot.

The Longhorns have won two straight games against Texas Tech and Iowa State and are now one win away against Kansas (insert Kansas beat Texas jokes here) from getting back to the Big 12 Championship Game. Texas can’t make the College Football Playoff, as only OU has a chance in the Big 12 to reach it, but even getting to the Big 12 Title game would be a massive success and step forward for Tom Herman’s program in Year 2. Texas’ defense took a big step forward as well in allowing just 10 points against the Cyclones and holding Brock Purdy in check, something no one else had done during Iowa State’s five-game winning streak.

Iowa State came up short against the Longhorns on Saturday in Austin, but they have two games left against Kansas State and then Incarnate Word (possibly, game still TBD) for a chance to reach eight wins. Unfortunately, the Cyclones can’t reach the Big 12 Championship game, but Matt Campbell and Cyclones fans have to still be thrilled with the progress this program has continued to make under his tutelage. Iowa State doesn’t commit any penalties, typically wins the turnover battle and has the best defense in the conference. It’s still a very exciting time for the folks in Ames.

The Mountaineers dropped this week after their loss to Oklahoma State in Stillwater. Dana Holgorsen should be losing sleep after blowing a 10-point second half lead and having Mike Gundy continue to have Holgorsen’s number. West Virginia’s College Football Playoff chances are gone, but they can still reach the Big 12 title game with a win over Oklahoma on Friday night. The Mountaineers gave up over 250 rushing yards against the Cowboys and will need to clean that up to have any chance against OU.

How about dem Cowboys?! This team is unbelievable. It loses to Kansas State and Baylor, but beats Texas and West Virginia? The Pokes are as confusing as any in the country. Taylor Cornelius had himself another very solid game, overcoming two interceptions to throw for 338 yards and five touchdowns, while rushing for over 100 yards and a score. The defense got some stops late when it was necessary and is now bowl eligible for a 13th straight season under Mike Gundy.

Suddenly, Texas Tech’s losing streak has reached four and now the Red Raiders need to win on Saturday against Baylor in order to reach a bowl game. This is exactly where Texas Tech was last season before beating Texas in their final game of the season and likely saving Kliff Kingsbury’s job. The losses to Oklahoma, West Virginia and Iowa State were tough and forgiving considering the margin of defeat, but getting held to under 200 yards against Kansas State on Saturday was very disappointing. But who knows how this season might’ve been different with a fully health Alan Bowman all season.

The Horned Frogs have dealt with a slew of injuries this season, but give Gary Patterson a ton of credit for beating his biggest rival on Saturday on the road with a third-string quarterback. After losing four of five games, TCU has now won two of three and has a chance to become bowl eligible with a win over Oklahoma State at home on Saturday. Jalen Reagor may be the most underrated offensive weapon in the country considering how little fanfare he has received this season.

If Saturday was it for Bill Snyder, the Kansas State Wildcats sent him out on a high note with a dominating win over Texas Tech. The Wildcats ran the ball well, won the turnover battle and played classic Snyder football. Suddenly, this team has won two straight games and can reach a bowl with a win over Iowa State on Saturday. Is it possible Snyder could hang onto his job with a win this week over Matt Campbell and company? I’m not sure, but it creates a fascinating storyline heading into the final week of the regular season.

The Baylor Bears were 5-4 needing to win one of their final three games to reach a bowl game, which would be huge for a young team that won just one game in 2017. However, after losing to Iowa State and TCU, the Bears now need to beat another team desperate for a win, Texas Tech, in order to become bowl eligible. In fairness, Baylor was outplayed, outmaneuvered and outhustled on Saturday against TCU, which falls back on Matt Rhule. But Rhule will get the benefit of the doubt here for what he has done in turning around this program in only two years.

Hey, the KU players appeared to be auditioning for their new boss Les Miles, who was officially announced on Sunday as the next head coach of the Jayhawks. KU put 40 points up on the Oklahoma Sooners and racked up over 500 total yards, by far their highest total of the conference schedule. The Jayhawks will try to send David Beaty out on a high note with a win over the Texas Longhorns, something this team, led by this coach, did two years ago, which was the unofficial end of Charlie Strong’s tenure in Austin. But for the Jayhawks, the far more interesting storyline remains off the field, where we get to see what staff Miles puts together and how he tries to recruit over the next few weeks.

Big 12 Football Week 12: The Good, the Bad, and the Ugly
Oklahoma State RB J.D. King to Transfer
To Top