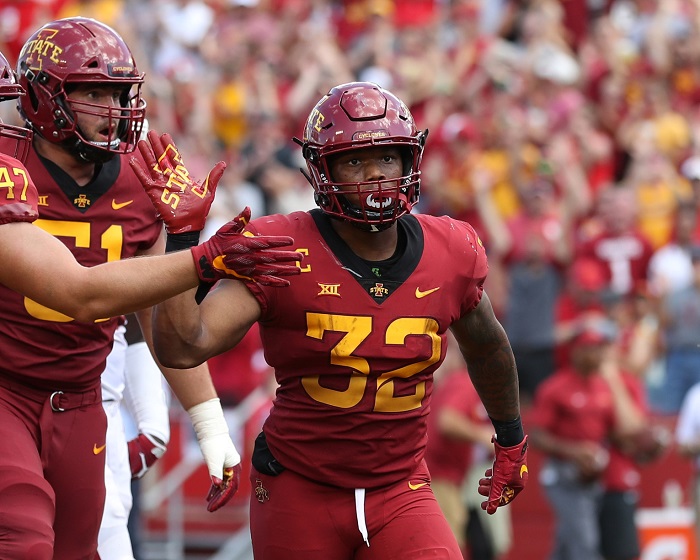 Here is everything you need to know about the upcoming Big 12 game in our Iowa State vs. Drake preview and prediction.

Warner has been as good of a ballhawk as there is at the FCS level. His eight interceptions are the most in the nation and he also leads the FCS level with 223 interception return yards. He was named a finalist for the STATS FCS Buck Buchanan Award, given to the nation’s top defender. He had three of his interceptions in one game against Marist.

Butler was arguably one of the biggest snubs from the All-Big 12 first team. His season did get off the a slow start, but he came on strong once Brock Purdy became the starter, finishing with at least 99 receiving yards in five of his final six games. Against Kansas State last week, Butler had five catches for 144 yards and a touchdown.

The Big 12 Defensive Newcomer of the Year is one of the many veterans in the secondary. Drake prefers to throw the ball, so Eisworth will be busy once again. He leads the team with 84 total tackles, along with four tackles for loss, showing his ability to play in the box as well. He led ISU in tackles in five of their 11 games this year.

Play great defense. The Bulldogs need their defense to keep them in this game. They have one of the best units at the FCS level, ranking eighth nationally in scoring defense (18.3 PPG), 13th in total defense (198.3 YPG), sixth in rushing defense (95.1 YPG), eighth in interceptions (16) and seventh in tackles for loss per game (8.3). If Iowa State comes out a little sleepy in this one, Drake’s defense might be able to be the difference maker early, try to force a key turnover, and maybe catch the Cyclones off guard.

Care. I hate to say it, but that’s what this game comes down to for Iowa State. In many ways, this is a very awkward situation. The Cyclones are coming off a thrilling comeback in Farmageddon, now it’s time to take on a Drake team that had a nice season at the FCS level, going 7-3 and 6-2 in conference, but it’s not going to be an easy one to get up for. It’s not like early in the season when it’s your opener or second game and everyone is motivated and wanting to improve. Yes, there’s still a bowl game to go to, but the Big 12 awards have been given out, there is the conference championship game also being played at the same time. The fan base will be sleepy as well. Care. And Iowa State rolls.

Iowa State might have a bit of a hangover effect, but they’ll take care of business. Drake is not one of those FCS teams that plays up… ever. The Bulldogs haven’t played an FBS team since September 20th, 1997, when they beat South Florida 23-22. Drake has a very good defense, but they haven’t seen anyone like Hakeem Butler or David Montgomery this season. And while their offense has experience, led by fifth-year senior QB Grant Kraemer, he has not even sniffed a defense like Iowa State’s. The Cyclones bring quite a bit more firepower than Valparaiso, Missouri S&T and Morehead State.