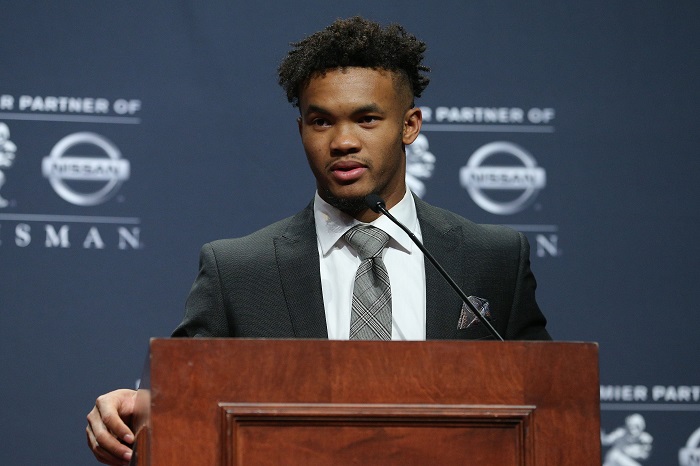 It should have been one of the greatest nights of Kyler Murray’s life when he won the 2018 Heisman Trophy, becoming the seventh Oklahoma player to win the award. Instead, it turned into a night resulting in him having to apologize for four or five tweets he wrote to his friends as a 15-year-old using anti-gay slurs.

No, here is what really happened. Some grown man loser (Scott Gleeson is his name) spent his Saturday night going through Kyler Murray’s 4,733 tweets trying to find something that would embarrass him on the biggest night of his life.

Sound familiar? It should.

USA Today pulled the same stunt on Donte DiVincenzo, the former Villanova player who had the game of his life in April’s NCAA National Championship game to help the Wildcats beat Michigan. It was the same playbook, as USA Today wrote then that these tweets “re-emerged” of DiVincenzo writing some not-so-nice rap lyrics on his Twitter page. They also didn’t re-emerge. They were dug up by guys with nothing better to do than find regrettable things 14 and 15-year-old kids once said to embarrass them on the most accomplished night of their lives.

But now, back to Murray, who released an early-morning tweet apologizing for what he once wrote.

I apologize for the tweets that have come to light tonight from when I was 14 and 15. I used a poor choice of word that doesn’t reflect who I am or what I believe. I did not intend to single out any individual or group.

I understand why Murray apologized. OU was feeling the pressure from a major media outlet and felt this would put a hopefully rapid end to this little fire. However, Murray shouldn’t have caved to the PC Police. He should’ve ignored it. And what makes him different from DiVincenzo and others, Murray already has a multi-million dollar deal signed with the Oakland A’s to play baseball. He is not looking for a pay day. It would’ve been a beautiful thing to watch USA Today and others never get the apology they believe they deserve.

A reminder: What a 15 or 16-year old tweets is not news. These stories are not going to stop teenage boys from being crude to each other. It’s in their DNA, it’s immature, it’s part of the growing up process and who they are. Does a now 21-year old Kyler Murray realize he shouldn’t use that language, especially on social media? I’m sure he does. Most adults do. Hence why Gleeson had to go back to when Murray was 15 years old to find this nonsense.

This is not the kind of story that is going to make someone who is actually a bigot look at themselves in the mirror and say, “You know what, I’m going to stop being such a piece of crap because Kyler Murray got caught on Twitter as a teenager saying inappropriate things.” If you are perpetually offended by things teenagers say, I’d suggest you walk around with a permanent pair of ear plugs.

Do we need to stand up to bigotry in society? Of course. Is this legitimate bigotry or is it a teenage boy being a dopey teenage boy? I’ll argue it’s the latter. And I don’t think it’s much of an argument.

There is no justifiable reason, other than to say these media members, if you really want to call these hacks such, are looking for clicks and to cater themselves to an uber-PC sports media environment that not only applauds this kind of nonsense, but thrives on it.

If anyone needs to take a look in the mirror, it’s not Kyler Murray. It’s everyone who’s supporting this type of “journalism”.