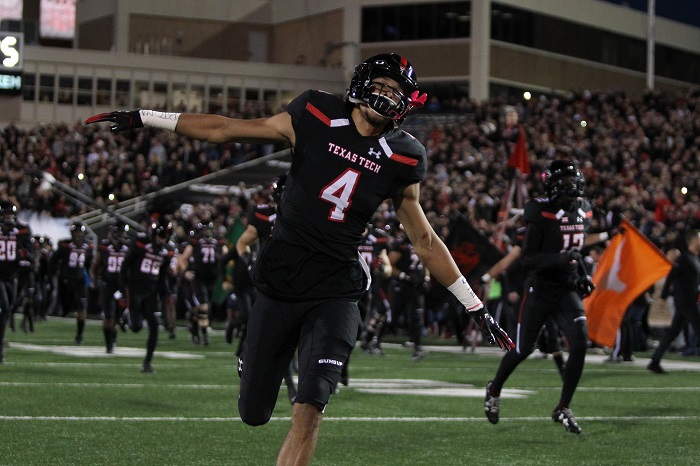 Texas Tech is losing its top playmaker from the 2018 season, as wide receiver Antoine Wesley announced he’s leaving for the 2019 NFL Draft.

Blessed for the past. Excited for the future! GUNSUP ALWAYS 👆🏽LOVE YOU TEXAS TECH RAIDERS & RED RAIDER NATION ⚫️🔴 pic.twitter.com/w3Xsobo3BO

Wesley came to Texas Tech from Cibolo, TX as a three-star prospect and was far from a household name in the national recruiting rankings. He was a two-time 25-6A All-District selection and was named to the San Antonio Express-News 6A All-Area second team as a senior.

His career got off to a slow start in Lubbock. Wesley played sparingly as a freshman, appearing in just four games and not recording a catch. His production improved slightly in 2017, when he played in all 13 games, but only had 10 catches for 137 yards.

But Wesley burst onto the scene this season with 88 catches for 1,410 yards and nine touchdowns. His 88 catches led the Big 12 Conference by nine and his 1,410 receiving yards edged out Oklahoma State’s Tylan Wallace by just two for the top spot.

His best game came against Houston, when he racked up career highs in catches (13) and receiving yards (261). He also had a four-game stretch from October to November with at least 100 receiving yards.

Wesley was named a First-Team All-Big 12 selection by Heartland College Sports and it’s unlikely his stock will ever be higher than it is right now. Also potentially factoring into Wesley’s decision is the fact that he will not be playing under offensive guru Kliff Kingsbury, who was fired following the season, and was replaced by Utah State’s Matt Wells.