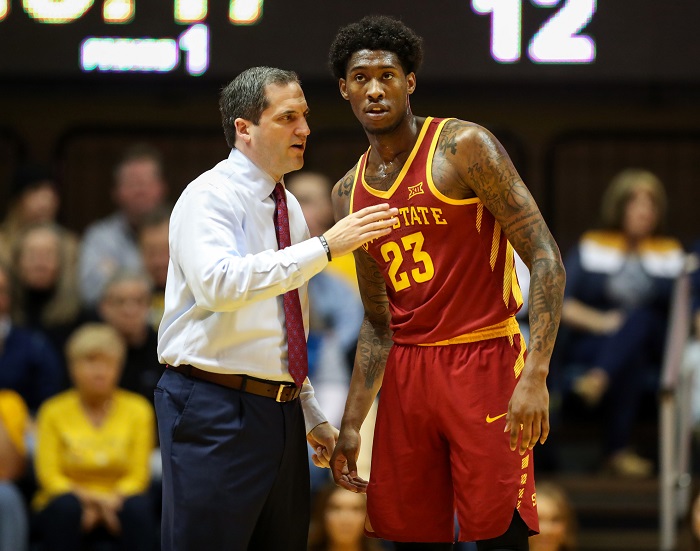 Between now and the beginning of conference action in Big 12 men’s basketball, HeartlandCollegeSports.com contributor Matthew Postins will watch at least one game for each Big 12 team and assess where each team stands in the final weeks before league action. Today it’s the Iowa State Cyclones.

The transfers were certainly worth waiting for

Cyclones fans waited a full season to see Marial Shayok and Michael Jacobson hit the floor, and the early returns are that it was certainly worth the wait. Shayok has been revelatory for the Cyclones, averaging 20 points per game and leading the Big 12 in that category. He drives to the basket with authority, has a good outside jumper, hits more than 80 percent of his free throws and grabs more than 5 rebounds per game. Against Iowa he poured in 19 points and had 3 assists while playing a 37 minutes. The injury to Wigginton has probably accelerated his development in this offense and once the sophomore returns Shayok may need to tap the breaks just a bit. But it’s clear he gives the offense a jolt. Same goes for Jacobson, the 6-foot-9 Iowa native who had 12 points against Iowa. He’s averaging 14.8 points this season and has a team-high 68 rebounds. While only 6-foot-9 he’s happy to mix it up inside and has enough range from outside to pull defenders away from the basket. The Cyclones had practically no depth last year, in part because Shayok and Jacobson had to sit out a year. Depth is not an issue anymore. They’re a perfect fit.

The Cyclones pulled in a substantial recruiting class, three of which came from the fertile Chicagoland area. The injuries and suspensions have forced the Cyclones to play the freshmen more often than they might have otherwise. But two — Talen Horton-Tucker and Tyrese Halliburton — have stood out. Horton-Tucker does not have a freshman build. At 6-foot-4 and 233 pounds (that weight is awfully precise) he drives the lane like a Mack truck and has emerged as one of the best rebounders on the team (5.9 per game). He’s averaging 15.4 points per game, second on the team, and had a team-high 21 against Iowa. His field-goal percentage must get better, though (just 41.5 percent). Halliburton is a far better shooter, both inside and outside the arc (42.3 percent from the 3-point line) and exhibits quickness up and down the floor. He’s averaging 8.4 ppg and had 10 against Iowa. These are the two players head coach Steve Prohm felt were closest to contributing during non-conference play and they haven’t disappointed. In fact, not having four veterans on the floor has accelerated their development.

I doubt there is a Big 12 team that has operated at such a talent deficit so far this season as Iowa State has. Guard Lindell Wigginton and forward Solomon Young have played one combined game due to injuries — Wigginton with a foot injury and Young with a groin injury. Wigginton scored 13 points in his only action, and neither played against Iowa. The good news is that both could be back as early as Saturday’s game with Drake. Meanwhile forward Cameron Lard and guard Zoran Talley Jr. have played three games since they each served a seven-game suspension. Talley is also playing with a face mask to protect a broken nose. Against Iowa, Lard scored 3 points and grabbed 3 rebounds in 11 minutes, while Talley scored 4 points in 11 minutes. The Cyclones have evolved into a different team in their joint absences, but Wigginton and Young should be immediately re-inserted into the lineup. As for Lard and Talley, their minutes may be dictated by the quality of play ahead of them on the depth chart.

All of the aforementioned losses led head coach Steve Prohm to move to a four-guard starting lineup — Horton-Tucker, Halliburton, Shayok and veteran guard Nick Weiler-Babb. Jacobson handled things in the middle. I like this type of alignment, especially once you get into Big 12 play where guard play is so key to success. It allows the Cyclones to be quicker in transition, allows them to take advantage of their ability to shoot and allows them to be quicker on defense. Additionally, it allows Wigginton to seamlessly move back into the lineup. I’m not wild about Jacobson in the middle, but the return of Young will rectify that. It might also mean the end of this four-guard alignment, as Jacobson’s play this season demands that he see the floor. But in spurts, I can see an alignment with Wigginton, Horton-Tucker, Halliburton and Shayok giving Big 12 defenses a lot of trouble. And then Prohm could toggle Young, Jacobson and Lard into the middle, depending on the situation.

If you remember the start of Big 12 action last season you could have made a case that Nick Weiler-Babb was the best overall guard in the Big 12. Only an injury midway through Big 12 action robbed him of what could have been an All-Big 12 First Team season. I saw a different Weiler-Babb against Iowa. Not a lesser one, mind you. But he was more facilitative at this point in the 2018-19 season than he was in the 2017-18 season. More assertive offensively last year, Weiler-Babb was more likely to call his own shot. Wigginton was still developing on the wing and the Cyclones didn’t have a lot of guard depth. This year the Cyclones have guard depth to burn, especially when Wigginton returns and Weiler-Babb can choose his spots offensively. They still need him to score — he’s one of the team’s best 3-point shooters. But at 9.0 points per game this season and 8 points against Iowa, one has to consider that might be his ceiling night in and night out this season. And that’s not a bad thing when you consider the weapons the Cyclones have on offense.

I asked Steve Prohm at Big 12 Media Days if the days of the lack of depth were over and he said he hoped so. He was hoping to have a 10-deep rotation by Big 12 action. The Cyclones are well on their way. Along with all of the other players mentioned, Terrence Lewis is a name to track as well. Assuming the team is healthy entering Big 12 action, a 10-man rotation is a lock. This is a better team defensively, a more versatile team offensively and a team hungry to erase the awful taste of last season. I felt they would be the biggest mover from the bottom to the top of the conference this season. Nothing I saw against Iowa, despite the loss, dissuaded me from that thought.

Next up: The West Virginia Mountaineers overwhelm the Pitt Panthers in the Backyard Brawl.