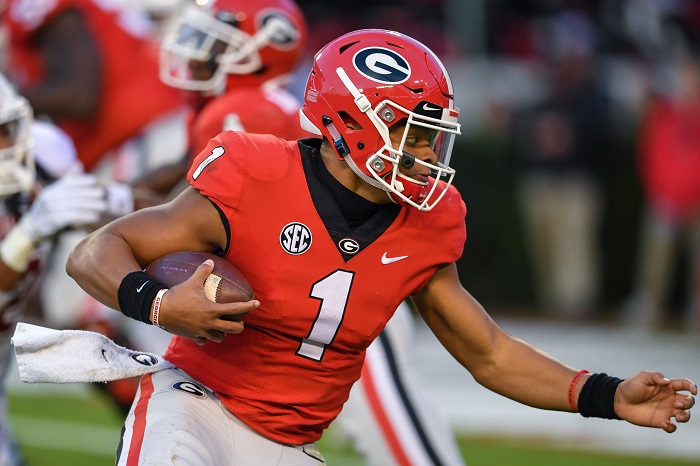 Huge news broke in the college football world on Monday night when it was reported that Georgia quarterback Justin Fields will transfer from the program after just one season, according to USA Today. The report cited an unnamed source close to Fields, since neither Fields, nor the university, have made an announcement. Following the USA Today report, the AP also reports that Fields has informed the Bulldogs of his plan to transfer.

Then, ESPN reported that the short list for where Fields may transfer included the Oklahoma Sooners, along with Ohio State and Florida State. But that report went on to add that Fields is only “exploring” a transfer and that he is likely to remain with the team through the Sugar Bowl and that his departure is “a possibility”.

If Fields ends up on the transfer market, he will end up as the hottest name by a mile. He was the top recruit in Georgia’s 2018 recruiting class as the No. 1 dual-threat quarterback prospect and No. 2 signal caller overall, ranking behind current Clemson QB Trevor Lawrence. He did play in 12 games as a true freshman with the Bulldogs, but was clearly the back up to sophomore Jake Fromm. He threw for 328 yards and four touchdowns while rushing for 266 yards and four scores.

If he does transfer, Fields would be the latest in a list of highly-recruited quarterbacks to transfer. Of the 18 other five-star quarterbacks since 2010, 10 have transferred at least once.

As for Oklahoma, it would be as appealing a place as any for Fields, considering Lincoln Riley has coached the previous two Heisman Trophy winners in Kyler Murray and Baker Mayfield, with the latter being selected No. 1 overall by the Cleveland Browns in this year’s NFL Draft.