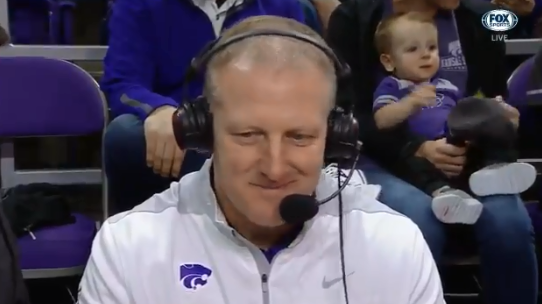 Kansas State head coach Chris Klieman joined the Fox Sports broadcast team on Wednesday night during the team’s win over Southern Miss. During his sit down, he talked about why he took the job with the Wildcats.

Chris Klieman on the Wildcats’ fan base: “That’s one of the reasons that attracted me to this job is the fan base. They’re crazy.”@KStateFB | @kstatesports pic.twitter.com/AzBjALK6R9

Klieman said, “That’s one of the reasons that attracted me to this job is the fan base. They’re crazy. It’s North Dakota State, just double or triple the amount. I’m so excited about getting out in the community, getting out and meeting as many fans as I can… it’s a special thing, they’ve really been receptive to me. I don’t spend much time on social media, I try to stay off it, but I’ve heard it’s been a home run so far.”

He added about meeting his team, “I had one meeting with them and I thought it went dynamite… I’ll start building those individual relationships and having those meetings [at the end of January].”

Klieman was hired earlier this month. He has a career coaching record of 70-13 in his six seasons as head coach, including a 67-6 record at North Dakota State. Klieman has agreed to a six-year contract with a base salary of $2.3 million in 2019 with a $200,000 increase each year.

Who Was the Best Big 12 Coaching Hire of the Offseason?
Alabama Suspends Three Players Ahead of College Football Playoff
To Top