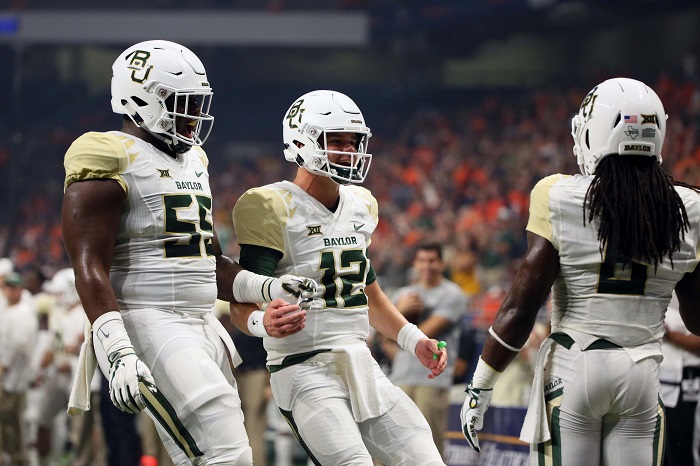 Here is everything you need to know about the Texas Bowl in our Baylor vs. Vanderbilt preview and prediction.

Charlie has been a little sporadic this season. He will have some solid performances and then will have a bad game here or there. This offense will go as far as Charlie can take them. This season, Charlie has thrown 17 touchdowns to 8 picks and is averaging 219 yards passing per game along 61.5% of his passes. He will need to have a big night if Baylor is going to win this game.

With Jalen Hurd out, Denzel Mims must step his game up against Vandy. While he has caught 8 touchdown passes this season, there are way too many times where he gets lost in the field of play. There are times where he makes big plays and times where he is almost no where to be found. The Brewer-Mims connection will have to come to life at the Texas Bowl.

When facing a typical SEC style offense, you better be prepared to stop the run game. Who better to do that than stud linebacker Clay Johnston for Baylor? Clay leads the team in tackles with 95 total tackles and the next closest person has 61. Oh yeah, did I mentioned he only played 11 games this season too?

Kyle does exactly what this offense expects him to do. He manages the offense well and doesn’t turn the ball over much. He has thrown 23 touchdowns to just six interceptions and has completed 63.9% of his passes this season. There is nothing wrong with being a game manager if you do it well and Kyle is more than capable of doing just that.

Ke’Shawn really came on strong in the final seven games of the season. After a slow start, he was able to string together four 100 plus yard performances in those final seven games. In fact, when he gets 15 plus touches per game, he averages 156.7 yards on the ground. The more they feed him, the better off the offense is.

Much like Baylor LB Clay Johnston, Jordan is the heartbeat of this defense. So far this season, Jordan has racked up a team high 110 tackles and you can find him around the football all the time.

Which Offense Can Step Up?

Look, it’s not like both defenses are that great. In fact, both Baylor and Vandy are very similar when it comes to defensive numbers not only in the running game, but the passing game as well. Both offenses average under 28.5 points per game and when you look at some of the scores from both teams you will see some numbers that make you scratch your head a bit. So, with neither defense being that great, who can take advantage of it? Baylor is without top wide out Jalen Hurd and it seems like in games they struggle to run the ball, the offense really gets stuck in the mud. The same goes for Vanderbilt. They were held to 17 or less points 4 times this season and if they can’t establish any sort of running game, I am not sure that QB Kyle Shurmur can win the game with his arm. I truly believe that if you can put 30 on the scoreboard, you can win this game.

If Baylor wide out Jalen Hurd was playing in this game, I would feel a lot better about the Bears offense. But with him being out, I don’t know if I can trust WR Denzel Mims to be that guy consistently in this game. Also, the Bears run game doesn’t make me feel any more confident in this offense. With that being said, I think the Vandy offense will take care of the football and really control the game. Give me Vandy by four.