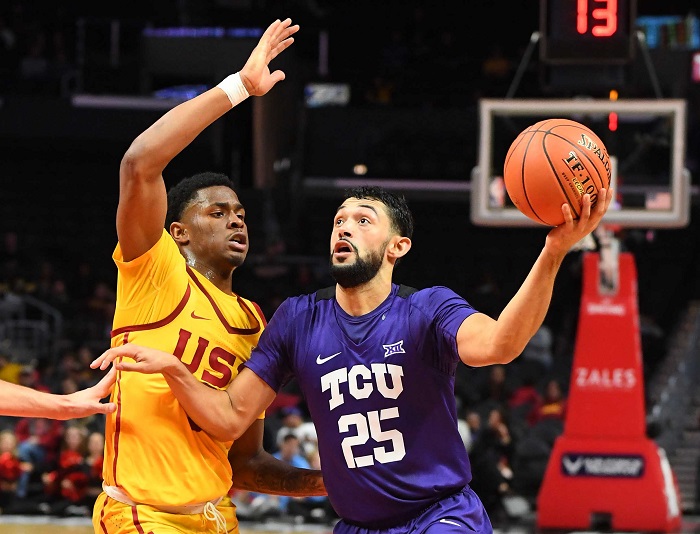 Between now and the beginning of conference action in Big 12 men’s basketball, HeartlandCollegeSports.com contributor Matthew Postins will watch at least one game for each Big 12 team and assess where each team stands in the final weeks before league action. Today it’s the TCU Horned Frogs.

TCU started its game with Indiana State with a three-guard alignment — Alex Robinson, Jaylen Fisher and Desmond Bane — and I loved it from a game-flow standpoint. Last year at this time Robinson had primarily a bench role while Fisher and Bane started. That was, in part, because of the multi-faceted senior, Kenrich Williams, who could also play guard. Robinson assumed a starting spot in Big 12 play last season when Fisher left with an injury. So I was interested to see how they would integrate all three once Fisher returned from that injury. Well, all three are regular starters and all three are averaging double figures this season — Bane with 13.8 ppg, Robinson with 13.1 ppg and Fisher with 12.1 ppg. Robinson has now emerged as one of the most productive point guards in the country (he’s been among the nation’s leaders with 8.6 assists per game). That takes pressure off of Fisher, who was last year’s point guard. Fisher is playing about 8 minutes less than Bane and Robinson, but against ISU he was effective, pouring in 14 points, including four 3-pointers. Despite getting a late start to the season — he missed the first three games — Fisher is the team’s top 3-point shooter by percentage. Bane, meanwhile, has grown into his role as a spot-up shooter with the bonus of being a good penetrator. But he’s also a great on-ball defender with and has tremendous ability as a double-teamer of the ball because of his 6-foot-5 frame. This appears to be the starting alignment head coach Jamie Dixon is committed to and, based on the Indiana State game and their production this season, TCU could have one of the best guard combinations in the Big 12 this season. They’re certainly one of the most experienced.

Kouat Noi and JD Miller were the likely starters in the frontcourt entering this season, especially when you consider Dixon is committed to the three-guard alignment. But only one of them — Miller — is starting. And in terms of improvement, Miller has certainly made strides. He could bring energy and defense off the bench last year, knowing that Vladimir Brodziansky would bring the offense. To be the starter this year Miller needed to emerge as a more consistent option on the offensive end, and that’s exactly what he’s done. He only had 7 points against Indiana State, but he’s averaged 11.4 ppg this season, a 3-point improvement over a year ago. He’s also doubled his rebounding production from a year ago (he’s averaging 6.3 rebounds per game). Noi is basically the team’s sixth man. He’s missed three games this season and he scored 10 points against ISU. But, still, coming off the bench he’s the team’s second-leading scorer at 13.7 ppg. So why mess with that rhythm? Noi seemed to press a bit against ISU and his biggest asset is still his outside shooting (37.5 percent from 3-point land). But his length means he’s a player that can’t be ignored and as the first player off the bench he brings immediate offense. And, like Miller, his offensive and rebounding numbers are up from a year ago. The frontcourt was the part of this team that had me concerned entering the season. The development of Miller and Noi assuages those concerns.

Entering the season Dixon talked about how this team was unique in his experience as a head coach. He had a group of players that had a ton of experience in college basketball. And then he had a ton of players that didn’t, most of which were freshmen or redshirt freshmen. Part of non-conference play, to him, was sorting that out. Based on the Indiana State game the youth movement is coming along nicely. Redshirt freshman center Kevin Samuel, at 6-foot-11, started from the opening game and gives the Horned Frogs a wide body inside they lacked a year ago. He’s averaging 8.3 points and 6.8 rebounds per game in less than 20 minutes per game, which is a highly efficient line for a young player. I thought freshman forward Kaden Archie brought a ton of energy and had a couple of really exciting plays against ISU, but he’s only average 2.1 ppg. Yuat Alok, the sophomore juco transfer, is logging some solid minutes as frontcourt depth, though he’s not as skilled as the players in front of him. Freshman guard Kendric Davis and redshirt freshman guard RJ Nembhard both had flashes against ISU and both have seen quality minutes this non-conference season. What will be interesting is how Dixon works his rotation once Big 12 play begins. Samuel is a lock to remain in the lineup. Archie, I believe, will get more minutes once he harnesses his pure athleticism. Alok figures to get 15 minutes a game to give Miller and Noi a rest. Davis and Nembhard could get lost in the shuffle. But overall their development serves two purposes. First, they’ve received quality minutes in non-conference and should be better ready to contribute in Big 12 action. Second, Dixon is craftily setting the table for next season when Miller and Robinson are out of eligibility.

Kenrich Williams was one of the most versatile players in the Big 12 last year. Listed as a 6-foot-6 guard, he could score and rebound like a forward and then run the floor and defend like a guard. That, coupled with the departure of forward Vladimir Brodziansky, is nearly impossible to replace and head coach Jamie Dixon acknowledged that at Big 12 Media Days. He said several players would need to play those roles. That’s how it’s worked for the Horned Frogs. Bane, Miller and Noi have picked up their scoring. The three-guard alignment with Robinson, Fisher and Bane has proved stifling defensively on the perimeter. Samuel has picked up the post play (Williams was as good a post-up player as Brodziansky was last year). And four players are shooting 34 percent or better from the 3-point line. That has made the Horned Frogs a bit more balanced. The only thing TCU missing is Brodziansky’s patented low-post slip screen, which at times was indefensible last year. Well the Horned Frogs don’t have that in their arsenal — at least not yet. But Dixon has found efficient ways to mitigate the losses of Williams and Brodziansky.

Of all the teams I’ve watched to this point, the Horned Frogs look the most like a finished product. That’s amazing when you consider how much youth Dixon had to integrate with his experience this season. But the Horned Frogs have bridged the gap remarkably fast. This is a complete team. The guard alignment will be hard to defend because all three can penetrate and shoot from distance. The frontcourt has a solid four-player rotation. Samuel can play with his back to the basket and he isn’t nearly done learning the game at this level. Miller’s improvement on offense makes him more dangerous, and Alok is a wider body inside than I expected. Noi’s outside shooting is still his best asset, but he’s one of the best hustlers among frontcourt players in this conference. The defense against Indiana State was incredible. The Horned Frogs created 20 turnovers in that game. This team does just about everything well and, barring injury, the Horned Frogs will be a player in this Big 12 Conference race.

Next up: Kansas State takes on Vanderbilt without Dean Wade.