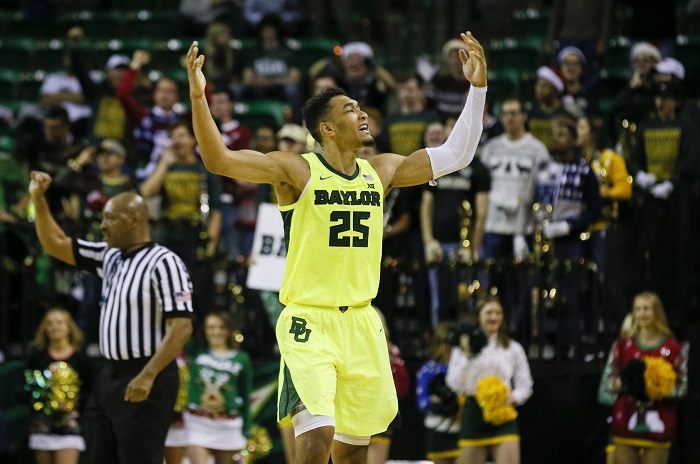 Between now and the beginning of conference action in Big 12 men’s basketball, HeartlandCollegeSports.com contributor Matthew Postins will watch at least one game for each Big 12 team and assess where each team stands in the final weeks before league action. Today it’s the Baylor Bears.

I was incredibly impressed with Tristan Clark against Oregon. Last year, as a freshman, he cracked the starting lineup and scored 6.8 points and grabbed 4.5 rebounds per game. But he wasn’t the focal point of the offense inside. That role belonged to Jo Lual-Acuil, the lanky center and veteran force inside. This season Baylor needed Clark to graduate to a larger role and he has done just that. Against Oregon he showed off his entire, improved game. He’s better with the ball away from the basket. He’s improved his skills with his back to the basket. He’s improved passing the ball out of the post and he’s improved his defense. And, incredibly, he’s improved his field-goal percentage from 60.8 percent last year to 85.7 percent going into the holiday. As of the Oregon game that FG percentage was the best in the country. That’s incredible when you consider that Clark takes practically all of his shots in traffic. Against Stephen F. Austin he was perfect from the floor. Entering the holiday he averaged 14 points and 6 rebounds per game. He doesn’t have to be a high-volume rebounder, as Mark Vital is handling that role in spades (he’s averaging more than 8 rebounds per game). That frees Clark up to be Baylor’s vital offensive force inside going into Big 12 play.

Baylor took a double hit at guard this offseason. First, there was the expected loss of point guard Manu Lecomte. Then Baylor found out Jake Lindsey would miss this season due to hip surgery. That left Lindsey’s roommate, King McClure, as the top returning player on the perimeter. Baylor needed him to step up this season and he has, improving his scoring average from 8.1 ppg last season to 11.1 ppg through the Oregon game, third-best on the team. What I was more impressed with, however, was McClure’s overall feel for the game. He’s dishing out more assists per game this season than last, and he’s taking on more ball-handling duties even though transfer Makai Mason is running the point. McClure looks like the off-guard that Baylor was hoping Lindsey would be this season. As for Lindsey, he’ll redshirt this season.

Much was made of Makai Mason’s transfer to Baylor. The former Yale product is the first graduate transfer Baylor has taken in under head coach Scott Drew. But, of greater significance, Mason was the devil three years ago when Yale beat Baylor in the NCAA Tournament. Mason’s transfer to Waco seems a little ironic given those circumstances, but it’s also well-timed. The Bears needed guard help and Mason has provided that. He’s the Bears’ leading scorer with 14.1 ppg, but he’s only dishing out 2.8 assists per game. He seemed tentative in the first half, primarily working the perimeter for baskets and pick-and-roll action. In the second half he let loose, drove to the basket more and kicked out to teammates. As a result he ended with 14 points and 4 assists against Oregon. He missed two seasons due to foot injuries, and Baylor eased him in by letting him miss a few games. But he logged 34 minutes against Oregon and if he’s durable enough to play in the Big 12 the way he played in the second half against Oregon, then he can really fuel this offense. Meanwhile, forward Mario Kegler, the Mississippi State transfer, is a full-time starter who is averaging 8.8 ppg and 5.8 rpg per game (in just five games). He knows how to move around inside, both with and without the basketball. Freddie Gillespie, the Division III transfer from Carleton (MN) has been no factor to this point.

Baylor continues to run its staple 1-3-1 zone defense. They’re the only Big 12 team that relies on a zone defense consistently in the halfcourt, though they will mix in some man-to-man on occasion. The biggest advantage to this defense, for me, is that it’s easy to learn the roles at each position and allows Drew to transition players quickly into the defense. For transfers like Mason and Kegler, that’s extremely helpful to their defensive development, as there is less thinking about the role and that leaves more time to read and anticipate. That 1-3-1 zone held Oregon — which was without its double-double machine, Bol Bol — to just 47 points. As of Christmas, the Bears are No. 3 in the league in scoring defense, giving up 61.9 ppg. They do a great job of converging on the basketball on the perimeter, but the interior part of that zone will have trouble with Big 12 teams with serious beef inside like Kansas.

Assuming a starting lineup with Mason, Clark, McClure, Kegler and Vital — which is how Baylor was aligned against Oregon — then it’s logical that Devonte Bandoo, Jared Butler and Matthew Mayer would be the primary players off the bench. The good news for Baylor is that all three of them are averaging better than 6 ppg, which means each has value beyond just playing a role. They can bring some offense. Bandoo is a juco transfer who has started five games this season and hasn’t shot well from the 3-point line to this point (less than 30 percent). But he was a volume scorer in junior college (16.8 ppg) and shot 43.8 percent from the arc. So he has instant offense in him. Butler was a Top 100 recruit who, curiously, enrolled at Alabama in the summer, unenrolled, transferred to Baylor and somehow is eligible this season. He’s carving out about 20 minutes a game and is a terrific free throw shooter. Mayer is the only big man among the three, coming in at 6-foot-9. Like Butler he was a Top 100 recruit and the Bears stole him out of the Austin area. He needs to bulk up to bang around inside, but he showed me a nice shot against Oregon and can give Clark and Vital some rest night in and night out. But that’s the extent of the quality of Baylor’s bench right now, and that’s a bit concerning when you look at the grind of the Big 12.

I had Baylor pegged as the No. 9 team entering the season. The Bears may still end up as the No. 9 team, but they’re a better team than I expected them to be at this point. The development of Clark and McClure has been key to getting the Bears to a point where I think they can be competitive in the Big 12 night in and night out. That 1-3-1 zone will always give Big 12 teams some fits (because Baylor is the only team that uses it) and Kegler has a higher ceiling than I thought coming into the season. Mason has to stay healthy for these Bears to be a real factor. Plus, the bench has to develop at least one more player in order for the Bears to stay energized for this Big 12 gauntlet.

Next Up: We wrap up the series with a look at Kansas.