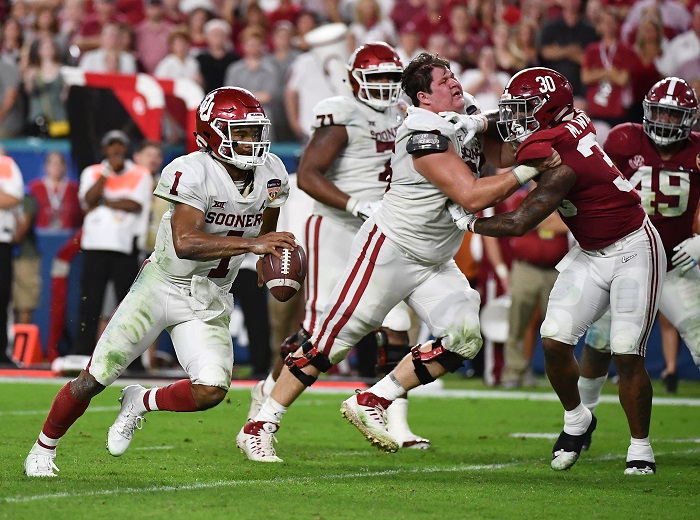 Just like that, the Big 12’s chances of getting into the national title game are gone. Big 12 champion Oklahoma represented the conference in the College Football Playoff against the almighty Alabama program led by Darth Vader himself, Nick Saban. While Oklahoma lost the game, we still need to go over what exactly happened. Where things went right, wrong and everything else in between. As always, there was some good, bad and downright ugly from the Orange Bowl.

Kyler Murray and the Comeback

After being down 28-0 early in the second quarter, I thought Oklahoma would just roll over and play dead with not only the way the defense was playing, but the offense as well. However, this wasn’t the case. After being down 28-0, Oklahoma went on to outscore Alabama 34-17, but unfortunately you can’t take away that dreadful start. But give credit to Oklahoma and Kyler Murray for chipping away at the Alabama lead. Despite the play of the defense, the Sooner offense finally found their footing, but it was too little too late. Whether you’re an Oklahoma fan or not, we saw why Kyler Murray won the Heisman a few weeks ago. He put the offense on his back throwing for over 300 yards as well as rushing for a team high 109 yards on Saturday night. Did he look a little rattled at first? Sure, but like I said, once he got going, there was no looking back for him. Also give credit to wide out CeeDee Lamb for stepping up when Marquise Brown was ineffective. I know I have said this before but without a guy like Kyler Murray at quarterback, imagine how this game could have went offensively. This team wouldn’t have even sniffed the playoff without Kyler Murray at the helm. For anyone arguing “Oklahoma shouldn’t have been in the Playoff”, did you see the Cotton Bowl score?

I am not even sure where to start with this topic. Look, we all know this defense couldn’t stop a nosebleed most of the time during Big 12 play, but somehow, they were able to make big plays defensively to make up for it in those final two games (West Virginia, Texas) to get them here. Unfortunately, that didn’t happen in this game. This defense didn’t get any turnovers and Alabama did just about anything they wanted to offensively. Alabama put over 500 yards of offense on this defense and quarterback Tua Tagovailoa lit them up like a Christmas tree. When Oklahoma needed crucial stops in the fourth quarter, this defense couldn’t do it. If you take away Alabama’s last possession (They kneeled the ball in the red zone), the Oklahoma defense was able to hold Alabama scoreless on two out of nine possessions. It doesn’t take a rocket scientist to figure out that is not how you win a game let alone one against a team like Alabama. Although, I am still scratching my head on how this defense held Alabama scoreless in the third quarter. One thing I must wonder is if this program played any sort of defense these past two seasons, would Lincoln Riley be a two-time national champion head coach?

I had no intentions of covering this game for the site besides writing this article on Sunday. So, I think Pete will allow me to say this, but I was planning on spending this past weekend with a few friends out of town and the “Take a shot for every Oklahoma touchdown” idea was highly discussed. Well, I ended up spending Saturday night at a family Christmas party, but it didn’t matter. Why? Because in the first half, Oklahoma was only able to score ten total points and one touchdown. So, if I did experiment with my little “idea” I would have been as sober as the person running your local AA meeting. The grass had a better chance at slowing down the Alabama offense than the Oklahoma defense in that first quarter. There is no other way for me to label it other than a complete sh*t show for Oklahoma on both sides of the ball to start the game. The Oklahoma offensive line (which is a very good offensive line) was dominated by the Tide defensive line early on and Kyler Murray was rattled like I have never seen him before. Did anyone really think that Alabama would get to a 28-0 start? Because I sure as hell didn’t. Either way, the poor start for Oklahoma ultimately cost them the game.

In this week’s show I discuss the Big 12 wrapping up a bad non-conference slate, why the conference should call the Nebraska...

Interview: The Oklahoman’s Berry Tramel on a Tough First Two Weeks in the Big 12

I’m joined this week by The Oklahoman’s Berry Tramel who discusses a tough first two weeks for the Big 12 Conference, plus...

The Big 12’s conference slate gets underway this weekend, and while it’s an unusual season, one thing every coach knows is that...

Here is everything you need to know about the upcoming Big 12 football game in our TCU vs. Iowa State preview and...

Oklahoma vs. Kansas State: Preview and Prediction
To Top