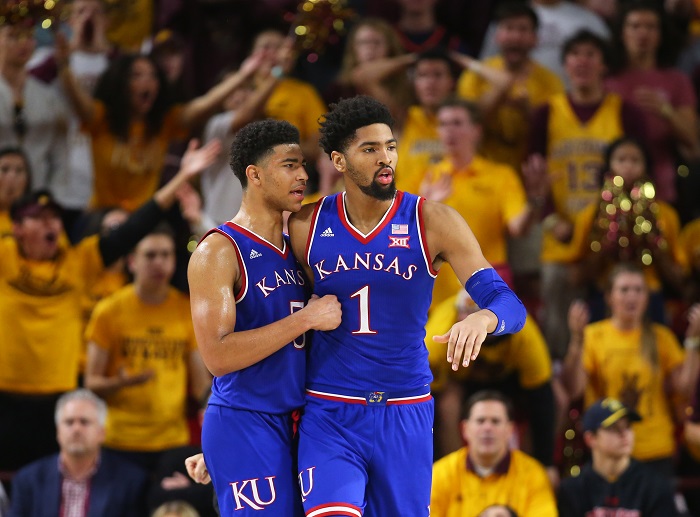 Between now and the beginning of conference action in Big 12 men’s basketball, HeartlandCollegeSports.com contributor Matthew Postins will watch at least one game for each Big 12 team and assess where each team stands in the final weeks before league action. Today it’s the Kansas Jayhawks.

The rise of Dedric Lawson

I was taken aback by head coach Bill Self’s statement at Media Days that Lawson was the “best passing big man he had ever coached.” That seemed like a pretty bold statement, given how good Kansas has been under Self. But let’s just say I agree with it and then some after watching Kansas’ loss to Arizona State. Lawson — who sat last year after transferring from Memphis — was averaging a double-double going into that game (19.7 points, 11.1 rebounds). Against ASU he scored 30 points and grabbed 14 rebounds. Along with the great passing, the Jayhawks have a complete player who could be on his way to the NBA after this season. The Jayhawks ran a lot of their offense through the 6-foot-9 forward. He has a quality turnaround jumper, baby hook and can spin and drive to the basket in close quarters. Seventeen minutes into the game Lawson had as many field goals as the Sun Devils. He’s an accurate high-volume scorer that you can’t foul because he’s about 80 percent from the stripe. He’s bought into playing defense the Bill Self way, too. He was most assuredly worth the wait for Kansas fans. He could be the nation’s Player of the Year if he continues to play this way in the Big 12.

I wasn’t surprised at all that Malik Newman chose to leave for the NBA after one season. I was surprised that guard Lagerald Vick flirted with the possibility. He talked with scouts, went through the process and got some feedback that led him to return to Lawrence for his senior year. Well Vick took that feedback and has developed into a different player this season. He’s more assertive with the basketball, which I felt was a problem last year. He’s developed into the one of the nation’s top 3-point shooters (50 percent through 11 games). He’s better at finishing drives to the basket and his man-to-man defense has improved too. He’s the complete player on the wing that teams are looking for and he’s averaging 16.8 ppg so far this season. The NBA will be waiting for him next summer. He’s rounding into a first-round pick.

Udoka Azubuike’s game is still evolving. We have to remind ourselves that he only started playing the game at 13 years old. He didn’t play against ASU as the Jayhawks are trying to get him prepped for Big 12 play after his foot injury against Wofford. But on the floor he’s averaged 12.9 ppg and 6.1 rpg this season. Statistically that’s not an improvement over last season, and I was hoping to see that this season. Now, Lawson has certainly siphoned off part of those opportunities. But what’s interesting to note is that without Azubuike the team’s 3-point percentage and points per game have actually gone down. His real value to this team is the fact that he’s so big that teams have to commit additional resources to defend him once he has the ball. That creates inside-out opportunities to score. So he’ll continue to get minutes once he’s healthy and he’ll continue to average about 10-12 points per game because his game is so close to the basket. But he’ll remain a liability at the free throw line (32 percent so far this season). The good news is that Self has the depth to replace Azubuike in key moments and avoid the “Hack-a-Shaq” treatment the junior endured at times last year.

The Jayhawks had their characteristic great recruiting class going into this season. Of the six, three of them are already logging quality time on the floor — 6-foot-5 guard Quentin Grimes, 6-foot-2 guard Devon Dotson and 6-foot-9 forward David McCormack. In fact, Dotson and Grimes have been so good they cracked the starting lineup from Day 1. Dotson has slid into the point guard role occupied by Devonte Graham last season, and he’s fit right into what Self wants out of a point guard. Dotson is averaging 10.8 ppg and against ASU he scored 12 points and dished out 5 assists. Now, he’s making some freshman mistakes (he had five turnovers against ASU, including a key one late). But I saw a player whose instincts with the ball are already upperclassmen level. He may not be the team’s leader, but he’s a quality passer and facilitator. Grimes, meanwhile, had experience with Self on the USA Under-18 team and he’s settled into an off-guard role. He scored 8 points against ASU and for the season that’s a bit above his average of 7.4 ppg this season. He has the potential to be an explosive scorer and Self’s experience with him means he knows how to use Grimes effectively. McCormack has logged more time with Azubuike’s injury and he had 2 points and 4 rebounds off the bench against ASU. He has a solid foundation of skills to build on for the future. But right now he’s going to be good depth behind Azubuike and Lawson in Big 12 play.

How deep are the Jayhawks?

Remember last year when the Jayhawks were basically a 7-deep team for a good portion of the season because of all the transfers they had taken in that had to sit? Well there is no such issue this year. Right now the Jayhawks look like a nine-deep team, including Azubuike. I’m not even including Mitch Lightfoot in that rotation, since he’s fallen back into being a spot player this season. But even he’s had an impact. Plus, Silvio de Sousa is still out with NCAA issues. The bonus of this recruiting class and this group of transfers is that when a player like Azubuike goes down, there isn’t as much stress on the roster as there was a year ago.  That should allow Self to keep his roster fresher.

Kansas is the best team in the Big 12, and it’s a much more significant gap than it was a year ago when the Jayhawks lost five league games. Their status as one of the nation’s Top 5 teams shouldn’t be in question. The injection of Lawson in the offense, the improvement of Vick and the addition of the freshmen means any team that beats Kansas in Big 12 play will have played a great game. The Jayhawks appear pointed toward a No. 1 NCAA seed and a 15th straight Big 12 regular-season title.

If you missed any of other our “Starting Five” features, here is the rest of the Big 12: