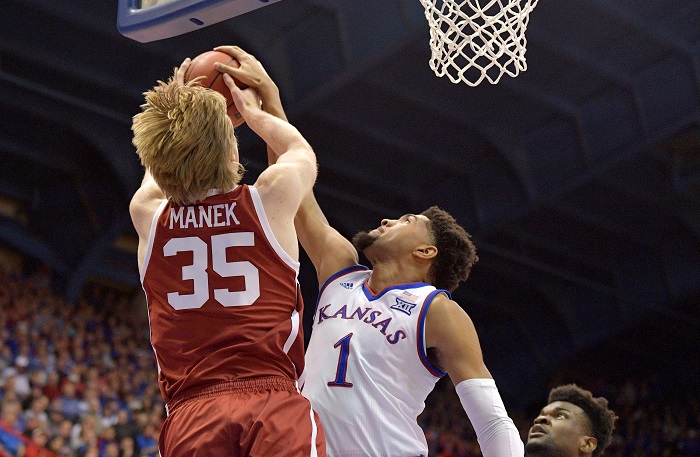 Big 12 men’s basketball decided to lift the lid on the 2019 league season with four evening games — three of which were at the same time. So I had to be creative to keep up with it all.

Hey, you CAN be everywhere. Just ask Dedric Lawson of Kansas, who led the Jayhawks to an 70-63 win over Oklahoma at Allen Fieldhouse.

“Led” might be a slight stretch, as Lawson didn’t have a particularly good first half, scoring just 5 points. But he had 7 rebounds and he ended the game with 13 points and 15 rebounds, including 11 rebounds on the defensive end. But the charm of this Kansas team is that nothing has to run through one player. Lagerald Vick had 12 points and 3 steals, Quentin Grimes had 14 points and Devon Dotson had 16 points and 4 steals. Then Marcus Garrett comes off the bench and has more assists (5) as the starters combined (4). Plus, Udoka Azubuike had 8 points and 9 rebounds. I mean, it’s hard to find a flaw in this team right now.

Oklahoma had a 7-0 lead to start the game, and it’s not like the Sooners didn’t hang in there. They did. But they suffered from horrible 3-point shooting (5-of-22, and Kansas was no better at 4-of-21). But, statistically, in every other way the Sooners held their own. Brady Manek (16 points, 11 rebounds) and Christian James (11 points, 12 rebounds) had double-doubles. Miles Reynolds and Aaron Calixte combined for 26 points. But that 15-point deficit at halftime doomed the Sooners to their first Big 12 loss. Forward Jamuni McNeace had just one rebound as he works his way back into the lineup. Getting him back to full strength will help. The Sooners will be a team to contend with.

So will Texas Tech, which went up to Morgantown, W.Va., and combined with the West Virginia Mountaineers for the night’s ugliest game. How ugly? Well, worse 3-point shooting (a combined 8-of-37), tepid free-throw shooting for West Virginia (18-of-32) and a gross amount of fouls called by Big 12 officials.


Yeah. There was no game flow at all. And, even at that, the Red Raiders managed to steal their first Big 12 win in Morgantown, 62-59. Five different players fouled out, including three Red Raiders. But Jarrett Culver managed to avoid fouling out, despite getting his fourth foul midway through the second half. He finished with 18 points, and that’s extraordinary considering he scored no points in the first half due to three fouls and West Virginia being focused on him all night. But, down the stretch, it was Culver who made the plays on both ends to life the Red Raiders to the win. Matt Mooney pitched in 14 points and Davide Moretti added 12 points, including a free throw to cinch the final margin.

This was exactly the type of game one would expect from two of the best defensive teams in the league. But West Virginia showed how much it missed Jevon Carter at point guard. They made some senseless mistakes offensively and committed 22 turnovers. The only thing that made head coach Bob Huggins’ face go redder was the controversial Texas Tech offensive non-call at the end of the game, which led to Moretti’s free throws. I thought the starting configuration was odd, too. The Mountaineers went with Logan Routt, Esa Ahmad, Wesley Harris, Chase Harler and Jordan McCabe. This group, to me, lacks a true ball handler and as a group they were terrible offensively — 3-of-17 from the floor. Ahmad was the only starter with assists. In fact, the Mountaineers had just six assists for the entire game.

So the bench did the heavy lifting. Lamont West had 22 points and drew the Culver defensive assignment when he was on the floor. Derek Culver, the freshman who just hit the floor a couple of weeks ago, added 12 points and the most energy of any Mountaineer on the floor. James Bolden added 9 points. It’s early but it might be time for Huggins to inject West and Derek Culver into the starting lineup on Saturday. Unfortunately, neither of them are a point guard and that’s their biggest issue. Well, that, and forward Sagaba Konate is out for a few weeks with a knee injury.

Texas clinched the biggest win of the night, a 67-47 win over the Kansas State Wildcats, who were without both Dean Wade and Kamau Stokes, the latter of which was a game-time decision with a foot injury. The Longhorns haven’t been the best road team this year nor have they been the best shooting team from the 3-point line. But on Wednesday night that changed.

On a night when the majority of the #Big12MBB shot horridly from the 3-point line the team that shot 32 percent going into league action — #HookEm — shot 50 percent from the arc. 🤷‍♂️ Texas wins over #EMAW 67-47. #Big12MBB @Heartland_CS


Yep, the Longhorns were blistering from distance and that did in the Wildcats. Jase Febres led the way with 23 points. The sophomore has finally made some strides for the Longhorns, who need some bench scoring and he’s hit double-digits in three of his last five games. And, as you can see, he was a big part of clinching the final margin of victory in the second half.

Still, some concerns. Texas had just one other player in double figures, guard Kerwin Roach II with 10. Forward Jaxson Hayes’ first foray into the starting lineup was successful with 9 points and 11 rebounds, but he’s clearly not there offensively just yet. The Longhorns need a consistent interior presence to join Febres and Roach in double figures. Texas shouldn’t be picky — Hayes, Dylan Osetkowski — wherever they can get it. It didn’t come from Jericho Sims. He rode the pine in favor of giving Hayes and Elijah Mitrou-Long a chance to start.

Meanwhile, KSU may be in trouble. It’s one thing to soldier through without Wade. The Wildcats have proven they can do that. But without Wade and Stokes? That could present a real problem. That’s 40 percent of K-State’s starting lineup and without the pair, defenses can spend their time focusing on Barry Brown Jr., the final piece of their trio of 1,000-point scorers. That’s what Texas did Wednesday, limiting Brown to 8 points, 5 rebounds and 5 assists. I thought there was a point in the second half where Brown was going to take over the game. It didn’t happen. Texas wouldn’t allow it. Mike McGuirl moved into the starting lineup for Stokes and scored just 5 points. If Makol Mawien is going to be K-State’s leading scorer — as he was with 13 points against Texas — the Wildcats are going to face some trials.

I’d like to see more of freshman Shaun Neal-Williams. He had 6 points and 4 rebounds in 20 minutes and brought some real energy off the bench. If he progresses he could slip into McGuirl’s temporary spot in the starting lineup.

Finally, Iowa State went into Stillwater, Okla., and grabbed a 69-63 win over Oklahoma State. The Cyclones are the Big 12’s leading scoring team and they certainly fell short of their average. But a road win is a road win in the Big 12 and the Cyclones snagged this one because four of their player hit double figures — Lindell Wigginton (17), Marial Shayok (16), Nick Weiler-Babb (15) and Tyrese Halliburton (12). That’s one of the things I like about this team. Now that it’s full strength, if one player has an off-night there is plenty of depth to pick up the slack. Wigginton is coming off the bench, for now. But he logged 30 minutes. Something tells me that Wigginton and Talen Horton-Tucker, the latter of which is one of ISU’s talented freshmen, will be switching spots soon. And that’s not a bad thing.

Cameron McGriff had a big game for Oklahoma State — 15 points and 13 rebounds — and he played nearly every minute. Lindy Waters III pitched in 15 points. The issue I see with these Cowboys is that McGriff and Waters are their two best players and it’s not clear if there’s another player at their level on this roster. Their talented junior, guard Curtis Jones, had just 3 points. Michael Weathers added 12 points off the bench. It could be that one of these two players steps into that role and makes the duo a trio. I think it has to be one of those guys. Thomas Dziagwa’s value is tied to his 3-point shooting right now and the Cowboys don’t have much of an interior game to speak of besides McGriff.

An upside for Oklahoma State? The Cowboys held the Cyclones to under 40 percent shooting and committed just 12 turnovers.

The Cowboys weren’t the only home team to suffer a loss on opening night, either.