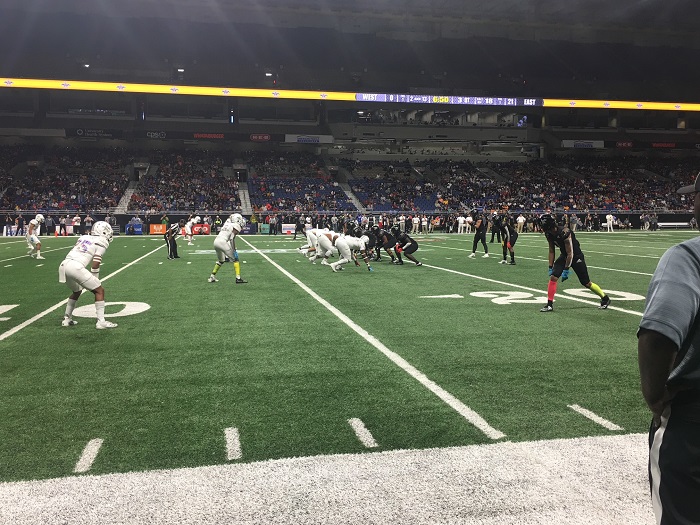 San Antonio, TX- A solid crowd came to watch 100 of some of the nation’s best high school football prospects on Saturday. Now whether they were entertained or not, I honestly have no clue because it was pretty much a snoozer due to the East dominating the West team 48-14. But trust me, there was no need to wake me up because I had my eyes glued to some future Big 12 players. There was a total of 11 future Big 12 players (10 on the West Team and 1 on the East Team) and all were committed or signed with either Texas, Oklahoma, Baylor and Iowa State. Now if you read my preview of this game, you’re probably wondering weren’t there only 10 future Big 12 guys in this game? First off, kudos for paying attention and the answer was yes but there was one player in this game who made their decision during the game. If you’re wondering how your team’s player or players did in this game, here is my review of their performance. Now, I didn’t get to see every single player on every snap, but I’ll give my best review of each player. I also was able to catch up with one player from each of the four Big 12 schools that were represented in this game. Enjoy!

Spencer set the All-American Bowl record for most passing yards in a game with 234 yards. While the sounds great, he did play nearly the whole game which isn’t normal in these types of games. Not to be a downer here but Spencer didn’t have his best day out there. It is hard sometimes for me to judge wide outs and quarterbacks in these types of games because they only get a week of practice and timing can be an issue on the field. Heck, even Clemson star quarterback Trevor Lawrence struggled in this game last year and he turned out just fine. One thing I will say is that Spencer has some mobility to him and is able to throw on the run. He has a little Patrick Mahomes in him.

I didn’t really get to see much of Trejan in this game, but I do know that he did have a nice diving catch when Rattler threw him a pass. Trejan is a solid athlete and he plays with a chip on his shoulder.

Both guys played but from where I was in the press box, it was hard to see and trust me, those jersey numbers did me no favors in this game. Both guys looked fine when I saw them at field level and played well for the most part. It will be interesting to see how they both fit in at Oklahoma and could there be some early playing time with some key pieces of that Sooners offensive line leaving for the NFL?

Jadon was the lone Big 12 commitment during the game but make no mistake, his commitment to Oklahoma was HUGE. It’s not every day your team gets a five-star commitment but after Jadon’s announcement the Sooners have three five stars for their 2019 class. Theo Wease (5-Star WR Signee) and Spencer Rattler (5-Star QB Signee) will join him as the other two five-star guys. If you watched the game, Jadon jumped out to you for sure. He had an excellent catch where he went up over a defender, caught it and took it the house for a long score. Jadon is a very special player and I can’t stress enough how important he is to this Oklahoma class. It’s not everyday you get three five-star guys in one class in the Big 12.

HCS caught up with Stogner for a Q&A. You can read that here.

Tyler made a few nice plays on Saturday. He did some good things on special teams and had some big hits at his safety position on defense. Overall, he was physical and is very lengthy standing at 6’2. I look forward to seeing what Tyler can do once he gets to Austin.

This is a guy who plays with a chip on his shoulder. De’Gabriel was outstanding when it came to stuffing the run game and just flat out loves to hit people which is what you want out of your inside linebackers. He has a knack for getting to the football and simply making plays. Texas fans should be thrilled that this guy is heading to Austin to play football.

Jordan didn’t have his best day out there but there were some plays that featured his athleticism after catching the ball. He is a very physical wide out who can break tackles on the fly. I saw it in his state title game and it was easy to see why so many schools wanted him. I had the chance to speak with Jordan after the game but to be honest with you folks, I am not going to post the interview. Jordan didn’t seem to be interested to talk after the game (West lost 48-14) and I had several very short responses. As someone who has done these types of interviews before, I knew when to step away. Plain and simple, this interview is best left out.

HCS caught up with Hall for an interview after the game. You can read that here.

HCS caught up with Ellis after the game. You can read the interview here.