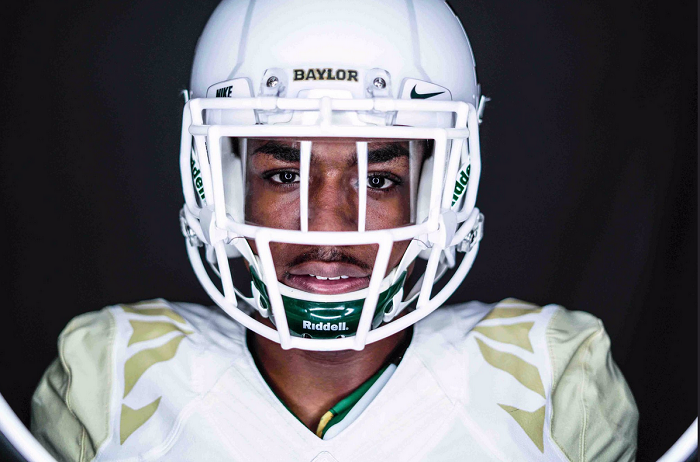 At Saturday’s All-American Bowl, three-star wide receiver, and Baylor signee, Jaylen Ellis participated. HCS recruiting guru Derek Duke got to see Ellis in action first hand and also caught up with the wide receiver for a Q&A after the game. Below are Derek’s thoughts, followed by the questions and answers.

“Jaylen got shaken up a bit in the game which cut his performance a bit short. In the second half he had his knee iced up, but he did tell me that he was going to be ok. Getting to see Jaylen up close, I can see why he was so highly sought after. He has a knack for the deep ball and is a legitimate deep ball threat when running those vertical routes that Baylor has produced over the years. There is no doubt in my mind when I say that Jaylen will be the next great Baylor wide receiver. I got the chance to speak with him on Friday at the awards banquet in San Antonio the day before the game.”

HCS: What are you looking forward to the most heading to Baylor?

Jaylen: “Nothing I haven’t already seen. I already know the offense can produce. The way Charlie (Baylor QB) balling out at 300 yards a game is crazy. I want to be apart of that and I want to lead the Big 12 and get a Biletnikoff trophy. There is so much I see in store for this team. “

HCS: Baylor has a good recent history at the wide receiver position. Did that play in to your decision a little bit?

Jaylen: “Just knowing what they are able to do. Not long ago I messaged Corey Coleman (Former Baylor WR) and told him that I appreciate everything he did but I told him that I was going to break all his records. I want to get that Biletnikoff and surpass him (Corey Coleman). I am setting the standard high for myself.”

HCS: Where do you see the Baylor program going moving forward?

Jaylen: “Nothing but development. You know what Coach Rhule has did in the past at Temple. He started at Baylor the same way. I don’t see anything but a Big 12 championship. I know we can get to that level and is another one of my expectations.”