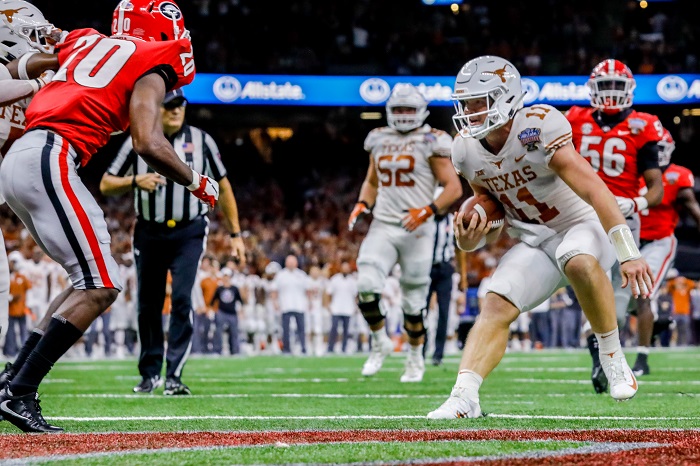 With the bowl season in the books, minus the National Championship Game between Alabama and Clemson, there were plenty of good moments and some not-so-good moments for all seven Big 12 teams that reached bowl eligibility. Let’s look back on the past couple of weeks and take a look at the five best moments for the Big 12 Conference.

Honorable Mention: Matt Campbell rips the officials and HCS has its most-viral tweet of all-time.

At the time, the Cyclones were down 28-20 to Washington State late in the game. On a 1st and 15 from their own 46-yard line, Purdy and Montgomery connected on a 53 yarder that went all the way down to the Cougars’ one-yard line. The Cyclones would punch it in two plays later, but would fail on the two-point conversion and lose the game 28-26. The pain didn’t last too long, as head coach Matt Campbell signed his second contract extension in as many years, continuing to show his commitment to Cyclone Nation.

The TCU offense was getting nothing accomplished against Cal, but the Horned Frogs were only trailing 7-0 thanks to a fantastic defensive performance. Reagor’s 58-yard punt return late in the third quarter that went down to the Call 33-yard line, resulted in the only touchdown of the game for TCU. The Horned Frogs would pick up a 10-7 win in overtime and finish the season on a three-game winning streak to give the program plenty of momentum heading into 2019.

After Oklahoma State’s fake punt failed, the Missouri Tigers had the ball down two points and in field goal range to start the drive. The OSU defense held the Tigers and then blocked a 42-yard field goal attempt from Tucker McCann. It was a huge momentum swing for the Cowboys, who then took the ball down the field and knocked through a field goal of their own to take a 38-33 lead, which would end up being the final score, giving the Big 12 its second win over the SEC.

Now, we get to the Big 12’s first win over the SEC, which came in the Texas Bowl. After going up 31-21, the Bears had a rough stretch from late in the third to early in the fourth quarter that included 14-straight Vanderbilt points, along with a Baylor interception. But down 35-31, the Bears first play of the drive was a 75-yard hook up between Charlie Brewer and Trestan Ebner. Baylor would never trail the game again and would go on to beat Vandy 45-38, helping set the tone for a solid Big 12 bowl season.

Even though the Big 12 was 2-1 against the SEC going into this game, having your runner-up beat up the mighty SEC runner-up that was being debated as a College Football Playoff team, was huge for the conference. And it all started on the opening drive, when Sam Ehlinger and the Longhorns rolled over a “dominant” SEC defense with a 10-play, 75-yard drive that ended in an Ehlinger two-yard run. The drive set the tone for the rest of the game in which Texas would never trail and would go on to beat the Bulldogs 28-21.

So while the Big 12 football season and now college football season has come to an end, we are all already itching for 2019 to get here. The good news is that you can look up the newest 2019 odds and what’s to come next fall right here.