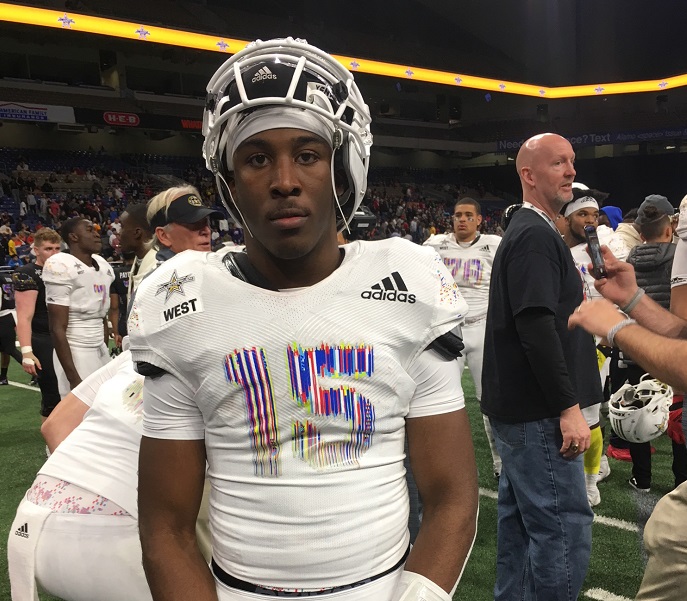 Heartland College Sports’ Derek Duke covered Saturday’s All-American Bowl in San Antonio and had a chance to analyze and catch up with Iowa State three-star running back Breece Hall. Hall signed with the Cyclones over offers from Iowa, Kansas, Kansas State and Baylor. Below are Derek’s thoughts followed by a Q&A.

“This was one guy who I was excited to get to see perform on Saturday. It’s not often you get a future Iowa State player in these games, so I wanted a chance to get to see him up close and speak with him as well. Talking to other people who watched every practice, nearly everyone I spoke with had nothing but positive things to say about Breece. After his performance at this game, it was easy to see why. Breece is a big physical runner but has some sneaky cutting abilities to make his cuts quickly. Not to mention, he is a much better pass catcher than I would have initially thought. There was a play early in the game where he lost two yards, but it was it one of the best two-yard losses I have seen in a while. He was dead in the water for a huge loss and he made about three or four defenders miss before finally being brought down. I am serious when I say, I think Breece will be the next big-time player at Iowa State. Afterwards, I caught up with Breece to talk about his future with the Cyclones and Matt Campbell.”

HCS: How excited are you to head to Ames later this month?

Breece: “I am really excited. I just feel like I want to go make as big of an impact as I possibly can. Them wanting to give me a chance as a freshman makes me want to go in and work even harder.”

HCS: It’s not everyday that a program signs two highly ranked running backs in the same class (ISU signed Jirehl Brock as well). How did you feel about that situation?

Breece: “I have actually been to some other junior days and visits where I have met Jirehl. We have always been cool and me and him want to be the best duo in the nation at running back. We are good friends and are both excited to get in there.”

HCS: Do you see similarities in your game compared to David Montgomery?

Breece: “Yeah. We are both big and have pretty good speed. We both have good speed and are secretly shifty, so I see a lot of similarities in our game.”

HCS: Where do you see this Iowa State program moving forward?

Breece: “They are up and coming. This is the best recruiting class they have had I am pretty sure. I am excited to get in there and work with my future teammates.”

HCS: What sticks out to you Matt Campbell as a coach?

Breece: “He is the ultimate competitor. He is competitive in everything he does, and I am the same way. I am excited for him to coach me and develop my game.”